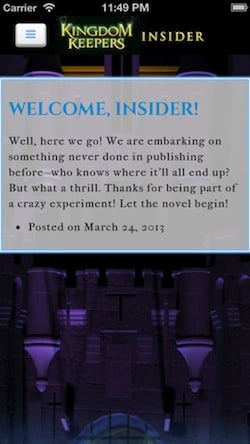 The popular book series The Kingdom Keepers recently released a sixth story ($10.99 on iTunes, $11 at Amazon) in a collection about five teens, who by day act as models for holographic guides at Walt Disney World, but at night when they’re asleep, a technology glitch transports them to the Disney Parks in their holographic forms. They then fight villains to prevent Disney’s destruction.

But the next book, the seventh and final Kingdom Keepers won’t be written solely by the author Ridley Pearson - he’ll have help from his fans. Kingdom Keepers has launched a cool and innovative app that will give their readers amazing interactive access to actually help write the final chapters!

The app will allow fans in real time to see the pages of the final book unfold as they follow Ridley Pearson as he writes. Fans will be able to vote on plot points, character involvement, and locations. Kingdom Keepers will even solicit ideas for dialogue through Chapter Challenges, and you, the fans and app players may find your ideas in the final book. To date over 3,700 entries have been submitted for Chapter 8 alone.

In addition, there will be New Fan Fiction Challenges that will push fans in writing contests based on content from previous books in the series. Entries will be judged by Ridley Pearson himself in an effort to promote writing and literacy with themes, locations and characters that fans already have a passion for.

There will also be blog posts and Kingdom updates to registered users so you can follow along as the story unfolds.

The app is available for free through iTunes. Content and contests can also be accessed through their website. The Kingdom Keepers series is recommended for kids 10-14 years of age.