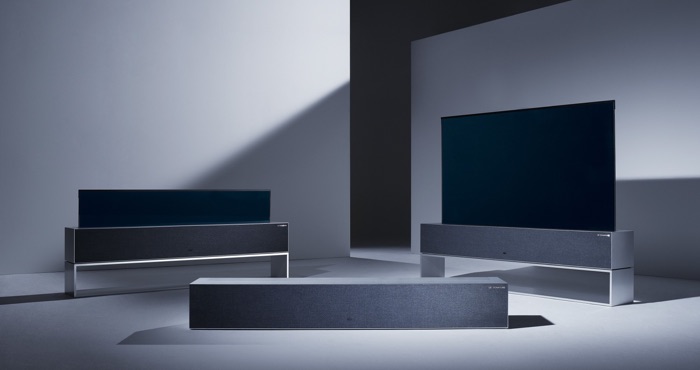 Massive televisions have come to dominate the modern living room. And while we all appreciate a big-screen cinema experience, giant televisions aren't always a match for our decor. These screens can fill a room, cutting into wall space for family photos, blocking windows to keep out natural light, and sometimes they can make even big rooms feel crowded. Television-makers have combatted this with increasingly slim screens that blend in rather than stand out, with sets like the LG Wallpaper, which is an astonishing 0.2" deep, or the Samsung Frame, which acts as a digital photo frame when you aren't watching TV.

But no amount of disguise can completely hide the 65" elephant in the room — that is until the LG Signature OLED TV R. This set doesn't try to blend in: instead, it rolls out of sight when you don't need it. The flexible screen rolls up and tucks away into its base when not in use, opening up the room for anything you want. The screen has three position settings: it can fully extended as a full-size TV, it can be partially extended for a smaller screen that might show a clock, weather, or music, or it can be invisibly tucked into the base. When rolled up, the base itself is completely inconspicuous, easily passing for a piece of furniture.

LG already makes some of the best screens on the market, with OLED sets that produce extremely vibrant colors and deep blacks. And despite the fact that this slim screen folds up, the Signature R uses the same OLED technology and second-generation Alpha 9 processor as the rest of LG's Signature lineup. According to LG, you won't notice a difference between this roll-up screen other screens.

But the Signature R is more than just a pretty face. The base hides some high-end speakers, with 100W, front-facing Dolby Atmos audio system, providing 5.1 surround sound for your movies and music. It also has all of the smart features you would expect from a modern television, with streaming, smart home controls, and the ability to display multimedia. You can control it with your voice assistant of choice, including Alexa, Google Assistant, and Siri, making it an easy fit into any smart home setup. These new sets also support Apple AirPlay 2, which will make it easy to get content from iPhones or Macs onto your TV screen — something that used to be difficult without an Apple TV.

Look for the LG Signature OLED TV R to go on sale later this year — and while we don't have a price yet, we expect it to be an expensive set.