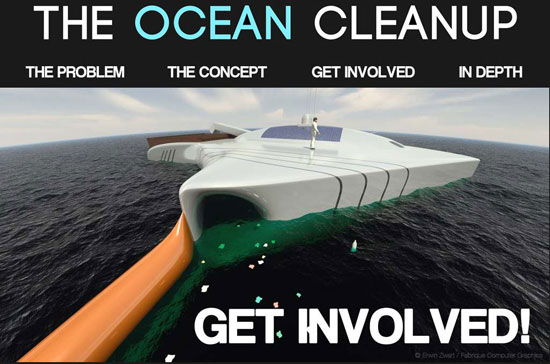 Plastic floating in our ocean is an ever-growing problem: Trash goes in, but it never comes out. The chemicals that leech off plastic are a major hazard to marine life, and should we all eat contaminated fish, they’re a hazard to our lives, as well. It’s a problem that seems larger than all of us.

It might also be a problem that was just solved by a brilliant 19-year-old engineering student from the Netherlands named Boyan Slat.

Much of the plastic debris in the ocean winds up floating on or just under the water surface. Ocean currents encourage this debris to collect in the same area over time in more concentrated garbage patches. Because this garbage – an estimated 100 million tons in the Pacific alone – gathers together in a predictable area, cleanup is tricky but possible.

Slat’s solution involves dispatching containment booms, much like the type used for oil spills, around the massive floating patches. Attached to the booms at regular intervals would be floating platforms designed to skim and collect plastic from the water. The platforms, powered by the sun and by ocean currents, filter plastic in a way that is harmless to wildlife. Each platform would collect an estimated 8,000 tons of plastic for recycling over five years, saving the United States millions in beach cleanup costs annually.

First reported on by Inhabitat, Slat’s ocean-cleanup design isn’t an out-there concept – it’s an award-winning one. The Ocean Cleanup Array has won awards from the Delft University of Technology and the Dutch Ministry of Infrastructure and the Environment. Slat, who looks more like a surfer than a scientist, has even taken his design to the United Nations, attending an international conference on water just last week.

Slat is seeking engineers and biologists to assist in the non-profit project, not to mention help with a research budget. If you have the expertise and are interested in lending a hand, you can learn more about the cleanup effort on Facebook.