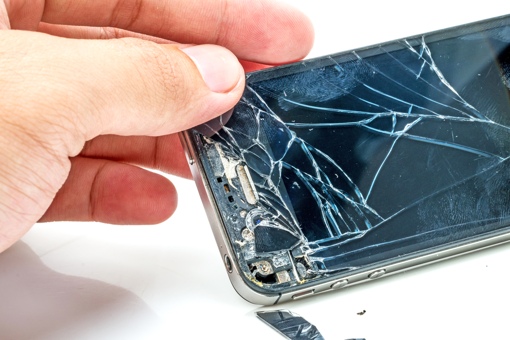 The annoying and expensive problem of cracked smartphone screens may soon be a thing of the past. According to The Independent, researchers at the University of Bristol in the U.K. have developed a new self-healing technology for airplane wings that they believe can also be used in consumer electronics devices.

“We took inspiration from the human body,” says University of Bristol Professor Duncan Wass, who led the research. “We’ve not evolved to withstand any damage – if we were like that we’d have a skin as thick as a rhinoceros – but if we do get damaged, we bleed, and it scabs and heals. We just put that same sort of function into a synthetic material: Let’s have something that can heal itself.”

The innovation involves the use of tiny microspheres that can be built in to surfaces. When the treated surface is damaged, these microspheres break open to release a carbon-based liquid chemical that seeps into the new cracks and quickly hardens to seal them. The cure is largely invisible to the naked eye, and allows the damaged material to retain its original mechanical strength. (The airplane version of the chemical contains a special ultraviolet dye so maintenance crews can detect damaged areas.)

Though the tech was originally designed for airplanes (and automoblies), the study authors say it could have a wide range of everyday consumer applications as well. L’Oréal, for example, is actively considering the technology for use in a self-healing nail polish. Self-healing phones are under consideration, too. “We’re definitely in the stage where in the next five or 10 years we’re going to see things like mobile phone screens that can heal themselves if they crack,” Wass added.

[Phone with cracked screen via Shutterstock]