Sharp Quattron+: Half a 4K TV for Half the Price 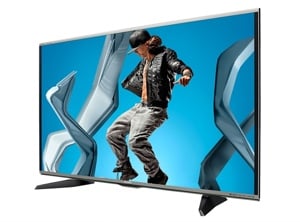 Sharp introduced its new AQUOS Quattron+ (Q+) full HD television at CES 2014 today, its solution for bridging the gap between the HD present and the pricy 4K UHD future.

The Quattron+ bills itself as the highest resolution HDTV on the market. While most display content using red, green and blue subpixels, the Q+ adds a fourth, yellow subpixel into the mix. Further enhancing the picture is the way the Sharp Q+ aligns pixels vertically, allowing the TV an effective 2,160 x 3,840 resolution (1080p). This not only means improved picture quality, but a Web/TV Split Screen mode with superior text rendering as well.

Of course, the Q+ lacks the "true" resolution to qualify as a true 4K UHD television. Still, the vertical pixel depth allows the TV the ability to play 4K content right out of the box, “delivering a near UHD experience.”

It’s still hard to find good 4K content, but that fact is quickly changing. Netflix recently announced that House of Cards and Orange is the New Black will be streamed in 4K Ultra HD, and Google’s YouTube will begin streaming in 4K later this year. And just today Amazon announced a partnership with major Hollywood studios to stream 4K content. Justifying a $10,000 Ultra HDTV purchase is difficult, but the Q+ offers a slightly more affordable future-proofed compromise you can enjoy long after 4K content becomes ubiquitous.

Still, the Sharp Quattron+ is far more expensive than most HDTVs currently on the market. The television is set to come in 60, 70 and 80-inch screen sizes at prices ranging from $2,999 to $5,999. The televisions begin shipping this February.