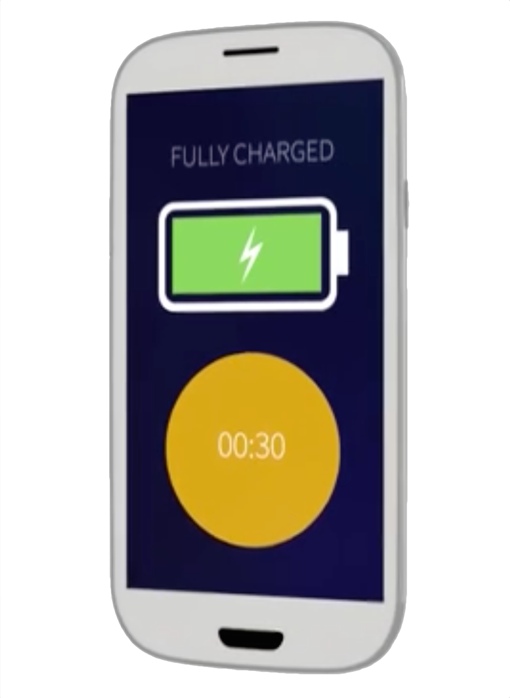 Tired of waiting for what seems like forever for your smartphone battery to charge? StoreDot, an Israel-based technology firm, may have the relief you seek. The company is currently developing a new type of battery that can be recharged in just 30 seconds.

Fast-charging battery tech would, without question, be a huge game-changer for mobile devices. It would eliminate the anxiety associated with low batteries (and the subsequent loss of communication ability). It could also revolutionize the way we use our phones and the functions it is tasked with handling. “Once you have an unlimited battery – because this is what we are offering … your whole applications and your whole usage model of the phone changes so you have better devices which are more energy-hungry, you have more applications which do amazing things,” explains StoreDot CEO Doron Myersdorf.

Interestingly enough, the new technology was born from research into Alzheimer’s disease. One bio-organic peptide molecule that doctors are studying as a potential cause for the disease was discovered to have a high electrical capacitance. StoreDot’s battery combines these molecules in a “Nanodot” crystalline structure that readily soaks up an electrical charge through the use of a powerful, high-amp (40 – 80 A) charger.

Quick charging is an impressive development, but it comes with some significant drawbacks. StoreDot’s prototypes have one-third less battery life than those currently in use in phones today. The technology is more expensive, too, adding a whopping $45 to a phone’s manufacturing cost. And the new type of battery can’t be retrofit into existing devices – smartphones will need to be designed around the new battery technology.

StoreDot batteries are not currently available to manufacturers, but according to The Guardian, the company is in talks with 15 different companies. If all goes well, the new technology could launch by the end of 2016. And not just in smartphones either – StoreDot has big plans to place this fast-charge technology into electric cars, as well.

For more on StoreDot battery tech, check out the full article over at The Guardian and watch the short promotional video below. If you’re too anxious to wait a year or two for faster charging phones, you may want to check out this neat trick to safely reduce the charging time of your iPhone 6. You should also read these tips to make your Android battery last longer and make your iPhone battery last longer.

Interesting article! Nowadays you hear a lot of new developments about battery technology. However I do not notice a lot of improvement in the products we use daily. In the article they mention about launching the product at the end of 2016, however I think ik could take a lot more time before it can be used in, for example, electrical vehicles.