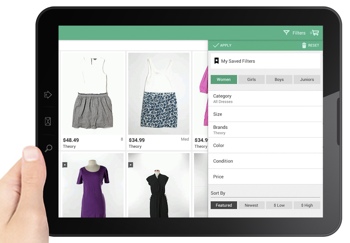 Already, Thredup carries over 150,000 fashion items for women and kids, including shoes, jeans, tops, dresses and other items. Prices vary between items, but in general are between 50 and 75 percent off retail. That holds true for the new luxury offerings – a gently used pair of jeans that retails for $150 can be found for $50. And if you ask me, jeans are more comfortable when someone else breaks them in, anyway.

Of course, buying is only one half of thredUp’s business – you can also sell your own clothes using the pre-paid shipping bags offered by the site. thredUp’s cut for high-value consignment items is as low as 20 percent, less than traditional stores. Proceeds from items not accepted for sale are donated to charities such as Teach For America.

To join the high-end bargain hunt or to get cash for your own designer looks, go give thredUp a visit at thredup.com. You can also download the thredUp app at the Apple App Store (iOS) or at Google Play (Android).