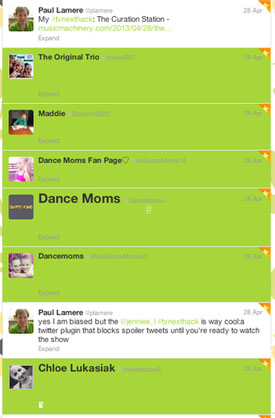 Here at the Van Allen household, Wednesday is Survivor night. Unfortunately, that means I have to avoid Twitter and other social networking sites entirely after the show airs on the East Coast, lest I accidentally read spoilers.

Thankfully, there’s a solution to the problem. It’s a browser plug-in called Twivo that scrubs your Twitter feed of your favorite shows’ spoilers until you can get around to watching the episode. But Google, Twitter, or some other large tech company didn’t create the software – that honor goes to Jennie Lamere, a high school senior from Nashua, New Hampshire.

Lamere created Twivo during a Boston-area Hackathon, where participants conceive, code, and create software programs from scratch over a weekend. The 17-year-old was the only female participant in the contest to complete a project, beating out the approximately 80 males in the competition.

The program itself is an add-on to the Google Chrome browser. When you want to avoid spoilers – say, for the upcoming season finale of Survivor – you can just type in “Survivor” and any tweet featuring the word will be hidden from view. That way, if one of your friends callously tweets about the results before you can watch the episode yourself, your virgin eyes will remain unspoiled.

Despite winning top honors, Lamere says her plug-in isn’t quite finished. She’ll be using the next couple of weeks to refine and perfect it. Still, despite not having a polished, final version, Lamere has already been approached by Furious Minds, a female-run tech company interested in marketing the finished product.

“Jen is going to be the only chick in the room for a very long time,” said Furious Minds CEO Ashley Swartz, who also served as a contest judge. “My responsibility is to give her opportunities that I didn’t have.”