iPhones and iPad Owners Need to Update to iOS 14.4 and iPadOS 14.4 Now

Keeping your iPhone and iPad's software updated is an essential part of thwarting hackers and identity thieves. Usually, it's ok to wait until Apple pushes through iOS and iPadOS updates. However, iOS 14.4 and iPadOS 14.4, which were just released, should be installed right away. That's because iOS 14.4 and iPadOS 14.4 fix three security bugs that were found by hackers and, according to Apple "may have been actively exploited." Security firm Sophos translates Apple's statement as, "this is a zero-day bug that attackers already know how to abuse." The vulnerabilities allow remote attacks on your device to run malicious code and give hackers privileges to access personal information on your device.

Before you update to iOS 14.4 or iPadOS 14.4, be sure to backup your device. Then go to Settings > General > Software Update. 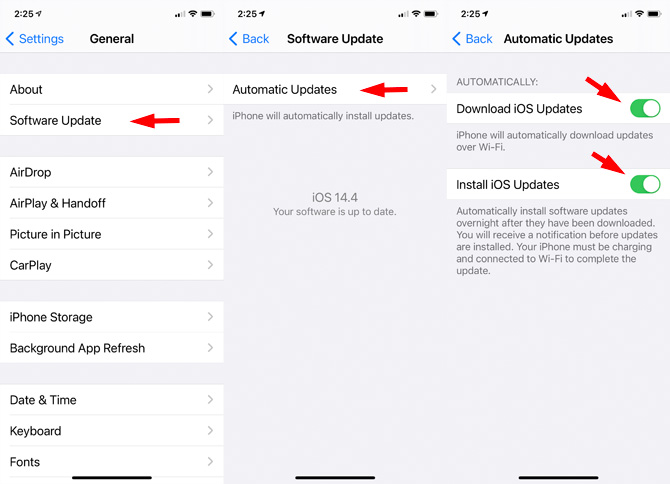 If you don't already have automatic updates turned on, go to Settings > General > Software Update > Automatic Updates and toggle on "Download iOS Updates" or "Download iPadOS Updates," which will download software updates when your device is connected to WiFi. You should also toggle on "Install iOS Updates" or "Install iPadOS Updates" to have updates installed. You will be notified before updates are installed, so you can always delay the install to a more convenient time.

My iPhone 6S accepted this update

Both my SE and 6S downloaded this software update successfully.

Glad to hear the process

Trying to get my iPad 2 to upgrade to iOS update

I’m trying to get my iPad 2 which will not go there than 9.35 how do I get the latest update today

That's as far as it goes

The iPad 2 can only be upgraded to 9.3.5 - that’s as far as it goes. You can learn about the limitations of older iPads in our story on how to update an old iPad.

Up grades for apple iPhones

Can I up grade my iOS on my iPhone 5s

The latest version of iOS