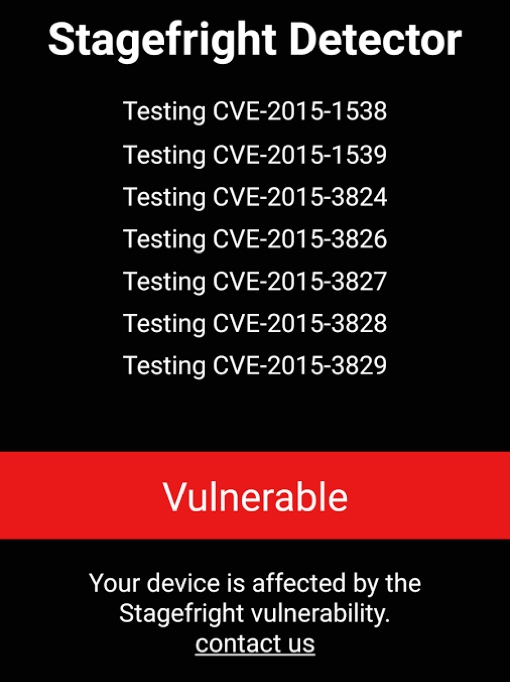 Are you worried about the Stagefright Android bug? If not, you should be – it’s arguably the most significant security vulnerability ever found on a mobile operating system. According to researcher Joshua Drake of Zimperium Labs, who discovered the problem, Stagefright affects up to 950 million smartphones around the globe, or 19 out of every 20 Android devices.

Wondering if your phone is one of the millions affected? The folks at Zimperium have just released a free Android app that can tell you for sure. The simple program, named “Stagefright Detector App,” will alert you if your phone is currently vulnerable to a Stagefright attack and – just as importantly – if a fix for the problem is currently available for your device.

The Stagefright security hole is located inside the Android program of the same name used to play back multimedia messages (MMS). Stagefright is used in apps like Messenger and Google Hangouts to view video. Hackers have discovered that the program can be used to deliver a malware payload when a victim plays a media message delivered to their phone. In some cases, you don’t even need to look at the message – your device is compromised the second a hacker hits “send.” Once compromised, your data can be easily stolen and your phone’s functions taken over.

Some manufacturers have pushed partial fixes for Stagefright. Unfortunately, it could take some time for all handset makers to update their models – Android security updates are notorious fragmented (though this could soon be changing). The most important thing you can do to stay protected from Stagefright is to update your smartphone as soon as a patch is available. You should also avoid opening multimedia messages from unfamiliar sources on your Android device.