Which Carrier Has the Best Family Smartphone Plan? 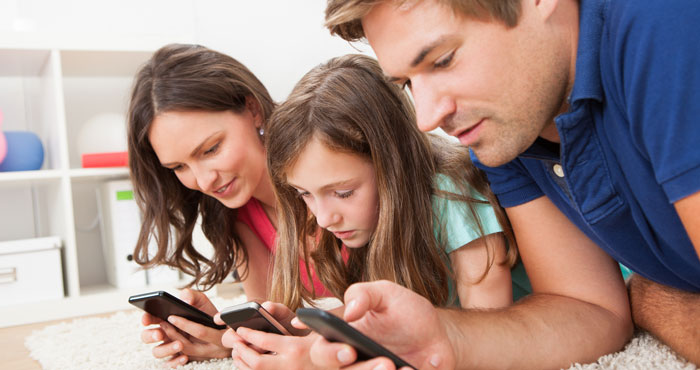 If you have a family, you likely don’t need me to tell you how expensive mobile phone bills can get. It’s not unusual for a family of four to pay $200 or more for service and still find themselves squeezed for data at the end of the month. Streaming video, streaming music, uploading and viewing pictures on Facebook and Instagram – all that data use adds up quickly.

The good news, though, is that your family can get service with a major U.S. carrier at a rate far lower than that if you’re willing to shop around, bring your own device or purchase a new phone without a subsidy. But, which plan is right for you depends on your family’s unique circumstances. Read on, consult our charts and find out for yourself!

Before you start shopping based on price, it’s important to remember that there are other highly important aspects to cell coverage. Not all networks are created equal. This year, T-Mobile surpassed the other major carriers for download speeds and Verizon was found to have the best LTE coverage, according to OpenSignal. We recommend you compare carriers’ coverage at opensignal.com. After all, a cheaper plan won't do you any good if you can't get a signal.

You’ll also want to consider exactly how much data you and your family will use in a month. If you currently have smartphone service, you can sign in to your account online and check your last few months’ of data usage. Otherwise, note that the average American uses 2-3GB of mobile data per month. As a rule of thumb, you should avoid plans that offer significantly less than this per person unless you’re especially price sensitive. High amounts of video calling (720 MB/hour), 4G LTE video streaming (350 MB/hour) and audio streaming (60 MB/hour) could necessitate even larger plans. Thankfully, almost all carriers will let you go back and adjust your data allotment at any time if changes need to be made.

What carrier has the best deal?

Right now, the best family plan wireless deal is being offered by Sprint. The Sprint Unlimited Data, Talk & Text plan offers a family of four unlimited data for just $90 per month. But there's a catch. After 9/30/2018, your bill will jump up to $160. If you're looking for stability in your plan price, consider Metro PCS 6GB plan, with 6GB per line for $115 for a family of four.

Want to see how all the plans from the top carriers stack up, side-by-side? Check out the comparison charts below.

Something else to consider is taxes & fees. For example, MetroPCS includes them in the price of their plans, so the $100 plan costs exactly that. For T-Mobile, taxes and fees are extra, so my $50 individual plan with them totals to about $60 per month. I guess their $100 plan would actually total up to about $120, and so forth.

All in all, a great run-down, and it’s caused me to reconsider my current plan.

Great point Keith! Taxes and fees can really add up.

The Sprint Unlimited promotional $90/month feeds end on September 30, 2018 and the price goes to $230/month for all customers (for 5 lines). This is a huge consideration, especially when looking to switch providers.

What about Consumer Cellular? Consumer Guide rates them the best.

Hi Suzanne,
Your article did a great job of simplifying all the plan features-that keep changing.  I know how tough it is as I’ve written about plans for WhistleOut.

We’ve got some articles that track market changes/plan and tons of other carrier info that may be helpful. http://bit.ly/2uzTV47

I have been a customer of Cricket Wireless for years now, and I NEVER paid any Fees.

Does anyone have actual experience with CREDO Mobile? I’ve come across a pretty good sounding plan with a free phone from them but would like to know more. I’m planning on calling them on Monday to clarify some questions I have.

Your Cricket plan is missing info. Im currently on 5 iphones for $100. No fees. No contract. Also each phone has 4GB of data for a total of 20GB. After the 4gb you have unlimited slow. Soon they will have wifi assisted calling. Just wanted to say that.

hi,
do any of the above cover western nsw ?  or is if just telstra ?