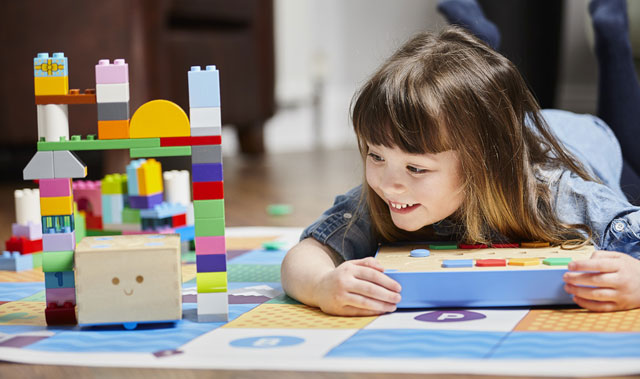 Kids thrill to the power of making their toys do their bidding, yet they also delight in toys that surprise them with new responses. These toys for the very youngest technoheads-to-be tempt kids into learning basic computer programming concepts as they fiddle and coax and put these toys through their paces. 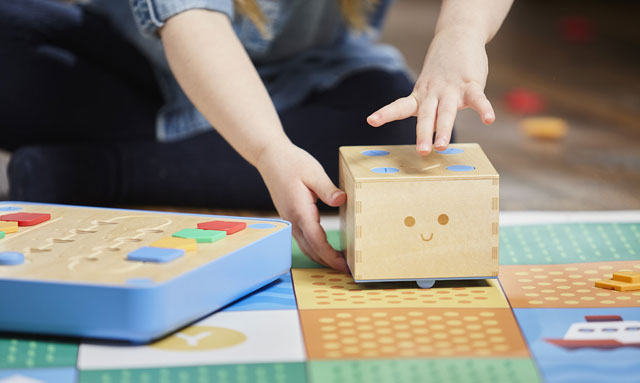 Cubetto is your child’s first entry into the world of coding. Specifically made for kids age three and younger, this super-smart playset teaches your toddler the basics of computer programming. Although it’s a tech toy, the friendly Cubetto robot is made from wood! Its programming console includes 16 color-coded blocks, a world map and an educational storybook.

Because Cubetto’s principles are entirely taught through play, not technology, little ones use touch, movement and sound to learn and understand. Each coding block is associated with a separate command (forward, left, right and function). Placing them on the board tells the robot how to move. The set is certainly rudimentary, but it’s a great way to provide an inclusive, interactive atmosphere for future learning.

Price: Starting at $225 at Primo Toys

Like a puzzle you can solve as many times as you’d like, the Code-A-Pillar is bringing Fisher-Price toys into the digital age. Code-A-Pillar gives even the youngest kids a chance to learn coding through the thing they love to do best: play.

Brightly colored and motorized, this caterpillar-like toy is made up of seven sections, each with a specific function. Connecting the segments in different order allows the Code-A-Pillar to execute its functions, using flashing lights to move from one action to the next. Kids connect the segments to make Code-A-Pillar go forward, left, right or whatever direction they choose. Challenge kids to reach your target by configuring Code-A-Pillar’s segments. It’s a perfect way to introduce children to sequencing. An expansion pack allows the Code-A-Pillar to achieve more complicated moves. 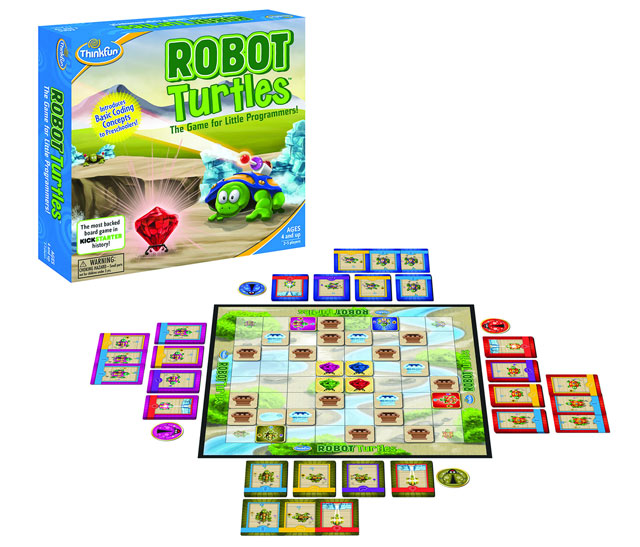 Designed by the CEO of Google Comparison, Robot Turtles is the most-backed board game in Kickstarter history. This interactive board game teaches basic programming using instruction cards and playing pieces. The pieces are — you guessed it — turtles, and the idea is that players move around a maze to capture jewels on their way to learning core coding fundamentals and creating sequences.

Inspired by the Logo programming language, Robot Turtles gets kids to write their own programs using playing cards. Though the basic game uses just one instruction card at a time, more advanced players can play up to three at once. 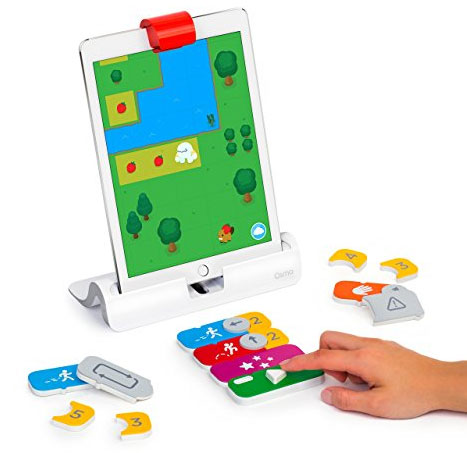 This iPad coding kit uses a gaming accessory and game piece sets that coordinate with free iOS apps. Along with the Osmo Stand and a red reflector that attaches to your iPad’s camera, the Coding Game comes with a set of magnetic numbered blocks that snap together to create commands.

A unique blend of digital and analog blocks become sequences guide your child’s character. Each coding command guides kids toward finding strawberries on their own private iPad adventures. 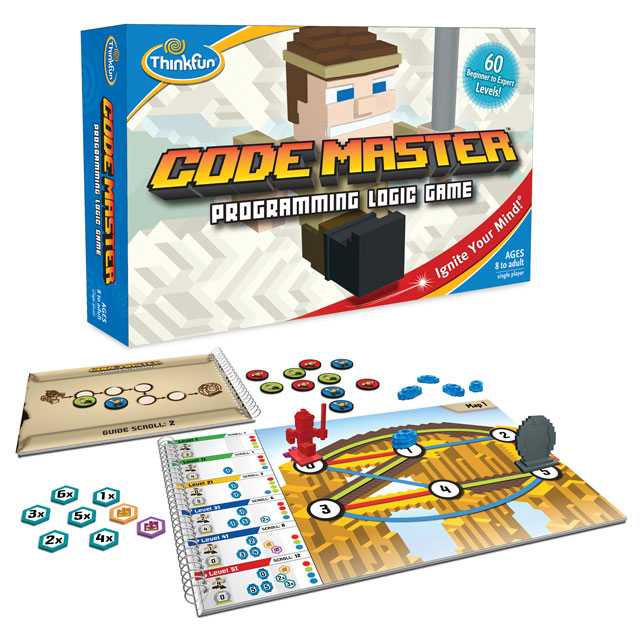 This board game is a sophisticated way to help kids age 8 and up solve problems using logic and sequential actions while simultaneously teaching them the fundamentals of computer coding. Concepts like conditional loops and branches are taught through 60 different levels. Kids learn the basics of programming, planning, sequential reasoning and problem solving.

The aim is to get your avatar to a portal, finding your way through crystals and along colored paths using specifically numbered colored chips. Reach the end portal, and you’ve picked up some serious coding skills on the way. 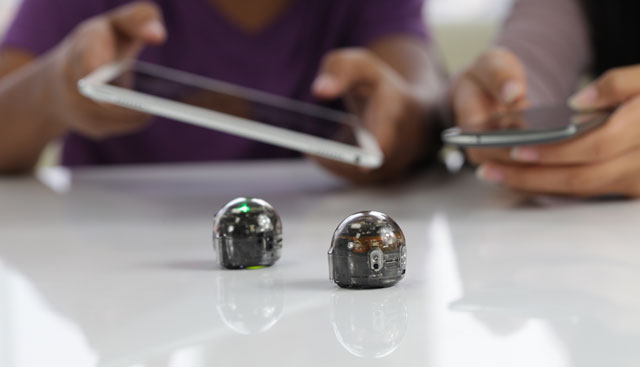 It’s a hit! This tiny, expressive robot The Evo was awarded PC Magazine’s 2016 Editor’s Choice award and was named one of the “coolest toys” by CNN Tech. This little bot is aimed squarely at older kids — even college students — with sensors, lights, sounds and a free social media app that lets you message friends and family. Code the Evo using colored lines drawn on paper or the block-like language Ozoblockly.

The included remote and free app lets you fully control your robot. The Ozobot Evo app (available for iOS and Android devices) lets you interact and program your bot with other owners, share and send programs and create Ozomoji actions you can work on together.

Ages: 8 years and up 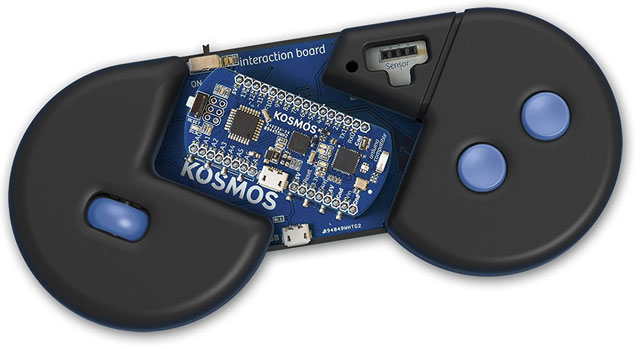 This hardware/software combo of game controller and app lets kids over 10 solve programming puzzles using the Arduino hardware programming framework. In true videogame style, the customizable controller uses lights and sound to help kids code and interact with the game. Kids will solve puzzles and game challenges to learn Arduino, following step by step through 15 levels on their iPad or Android tablet.

In addition to teaching sequencing and problem solving, the Code Gamer can help kids develop fine motor skills and (ahem) patience. It comes with plenty of extras like a circuit board, motion sensor, temperature sensor, Bluetooth microcontroller and 34 coding experiments for kids to try at their own pace. 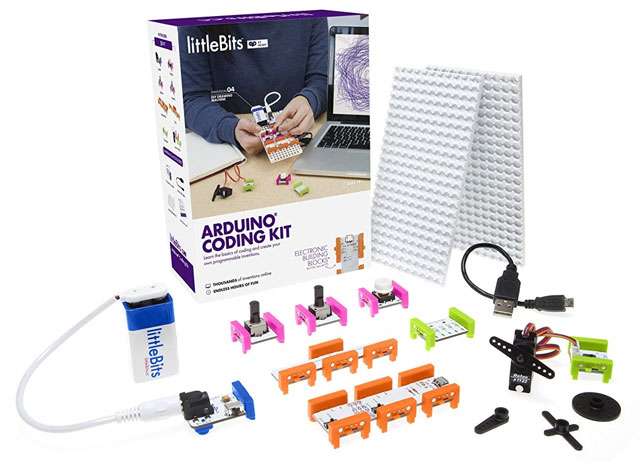 This hands-on coding and inventing kit lets kids build all kinds of programmable devices using the Arduino hardware programming framework. This simple toy comes with eight Getting Started prototyping modules, a great beginning for programming novices and electronic tinkerers of every level. Everything you need to get started, including the battery, is already included.

Want more of a challenge? Log on to the LittleBits Community to see what others have been up to.