7 Ways to Save Energy (and Money) 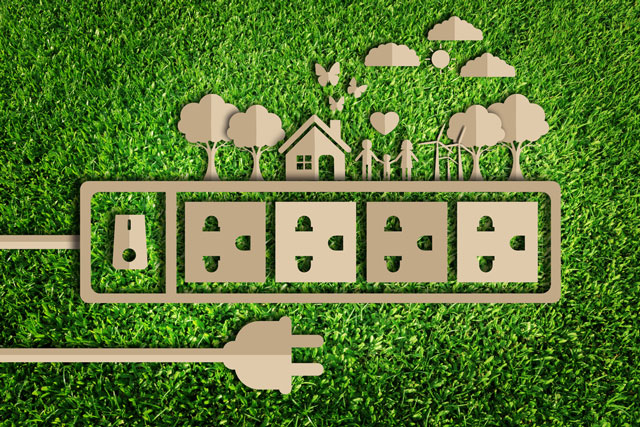 One of the best reasons for upgrading your home with smart devices is to conserve energy (and money spent on energy bills). And there's no better time than now – Americans expect that smart  home devices will be as common as smartphones by 2025, while one study found that by the end of the year, nearly half of Americans will have smart home tech, with temperature, lighting and security gadgets topping the list of devices.

Outfitting your home to be eco-friendly and digitally savvy doesn't have to cost a ton upfront. There are small, sustainable additions you can make to your home that are inexpensive and simple to install yourself. 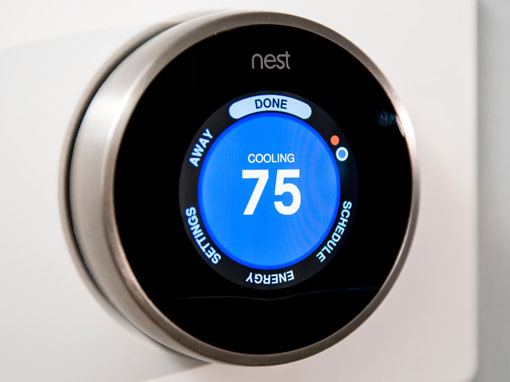 As winter relinquishes its icy grip, getting the level of heating just right – and not too much – is crucial to minimizing energy bills. Programmable thermostats are an old-school way for households to save about $200 a year, but smart heating that automatically turns on when someone comes home - and off when everyone leaves for the day - is energy-efficient as well as low-effort-low.

The smart learning thermostat from Nest got a recent update that improves its ability to detect when you're home or away by using the GPS on your iOS or Android smartphone, as well as those of your family (up to six members who can be added to your Family Account) – handy to ensure the heating stays on if you're gone but everyone else is home. The Nest Thermostat ($245.99 on Amazon) works with many other connected gadgets all for voice commands, so it's future proofed for your forays into further smart home upgrades.

Alternately, the ecobee3 ($228.99 on Amazon) is another wireless thermostat that works with Apple and Samsung's respective smart home hubs, as well as Amazon's Echo for voice control.  It connects to other sensors in the home to figure out how hot a room needs to be, and claims its customers saved to save an average of 23% annually on energy bills. 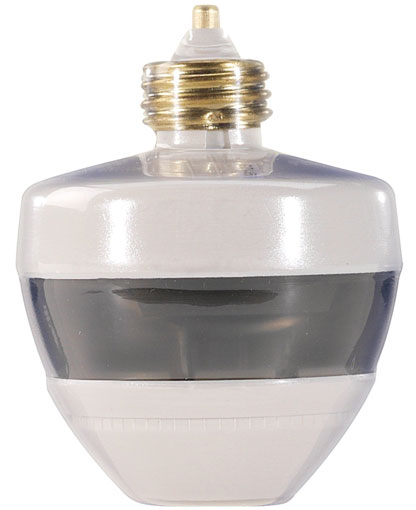 Forgetting to turn off lights is a persnickety reason for higher-than-necessary energy bills. Counter that memory of yours (and add convenience to your life) with light sockets that use motion to figure out whether a bulb should be on or off. Great use case: Laundry lights for when your hands are full, and entry hallway lights so that the lights automatically flick on while you're removing your shoes, and off when you've entered the living room.

Light sockets such as the First Alert PIR725 ($18.88 on Amazon)  fit into existing light sockets and work with both fluorescent and incandescent bulbs. Others like the Lutron Maestro ($19.97 on Amazon) have ambient light detection to determine when there's enough daylight to remain off even when you are in the room. The Maestro sensors work with any types of bulbs including CFL’s and LED’s.

Turning off the water when you're brushing your teeth is the number one no-brainer move to save up to 3,000 gallons of water a year per house. By only turning on when sensors detect a hand, automatic taps can also save that amount of water that comes out between you turning on a tap and actually using the H2O.

Automatic faucets are electrically powered, either through battery or plug, and can be fitted to your sink. You can get a faucet for your kitchen, like the Moen Arbor with Motionsense (about $350 on Amazon), or a bathroom faucet, like the Home Deck ($80 on Amazon).

If you’re in the market for a new faucet, shower or toilet, look for the WaterSense sticker, a certification sponsored by the US Environmental Protection Agency that shows how a product helps save water, energy and money. In 2014, the use of WaterSense products saved 346 billion gallons of water and cut 146 billion kwH of energy needed to heat and treat water that was no longer being wastefully pumped (which is like eliminating 54 million metric tons of greenhouse gas, or planting 1.4 billion trees)

The lights are on but nobody's home – that's not something you'll ever have to say again. Smart lights that connect to your Wi-Fi network can be controlled by smartphone app from anywhere, as well as connect with smart home hubs such as Apple HomeKit or Samsung SmartThings, depending on the brand. They can also monitor energy usage so you can replace any energy overeaters with more efficient versions.

Create mood while remotely controlling that ephemeral beast light with the Phillips Hue lightbulb, a standard screw-fix bulb that can be adjusted for color and brightness, as well as programmed to turn on and off at particular times. You can get a three-bulb Starter Kit ($199.99 on Amazon), the idea being that the three bulbs work together in complementary shades and intensity to create various light profiles such as 'energize' or 'concentrate'. The bulbs can also be synced to music, and work with Apple HomeKit and Nest. 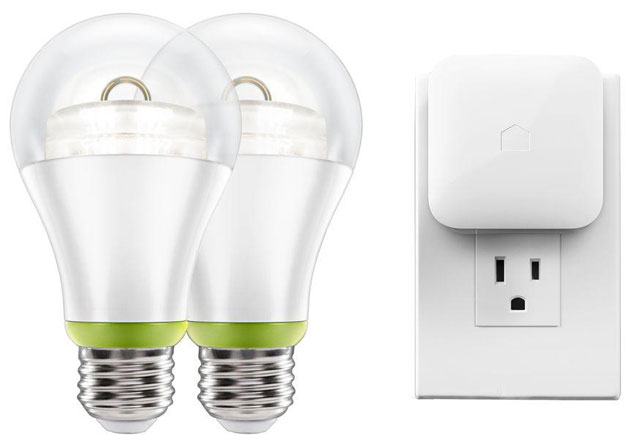 For a quick and wallet-friendly way to pare down lighting costs, the GE Link Smart LED bulbs use 80% less energy than traditional bulbs, and can be controlled via a smartphone app, Wink (free on iTunes or Google Play). The GE Starter Kit Bundle, a set of two bulbs and a Link hub (necessary to connect to Wink) runs $45.01 on Amazon, with additional bulbs costing about $15.

If the Amazon Echo is your voice controller of choice, the Lutron’s Caséta Wireless lighting control system ($99.95 on Amazon) recently got an update to take vocal commands via Alexa, as well as regular prodding on its smartphone app (free on iTunes or Google Play) or dedicated remote control. The Caséta Wireless bridge plugs into your home Wi-Fi so that any lighting product can be told to turn on or off for anywhere you can get Internet access with your smartphone. 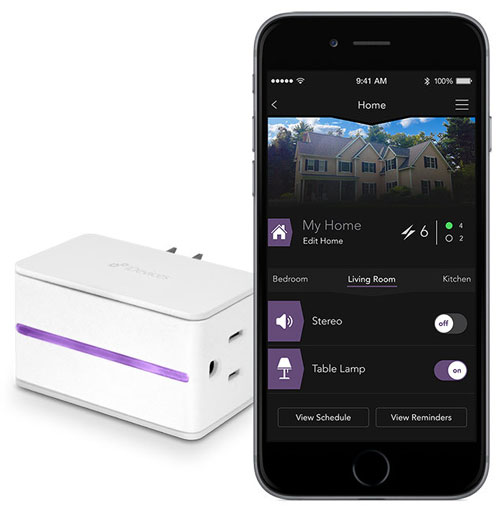 Turn any dumb appliance into a piece of electronics that reacts to your every mood by plugging it into a smart switch. These switches connect to your home Wi-Fi so that the appliance can be turned off via an app while you're away (or too comfortable to get up).

The Belkin WeMo Insight Switch ($49.99 on Amazon) can be preset with times to turn on or off, as well as control all the other Insight switches in the house, together or separately. Via the respective apps (Free on iTunes and Google Play) you can also monitor the energy usage of the appliance connected to the switch, helping build a picture of where your energy bills are being spent – and potentially, how to reduce them.

If you live in an iPhone household, the iDevices Switch ($48.97 on Amazon) is an iOS-controlled switch that can be programmed with the iDevices Connected app (free on iTunes) to turn on and off at set times, as well grouped with other iDevices switches to be turned on/off in certain profiles (say, “movie time”) or room groups (“kids waking up”). Naturally, it integrates with Apple's HomeKit, and can be controlled by telling Siri what appliances to turn on and off, too.

Finally, for a smooth wall finish, the Insteon On/Off Outlet ($49 each on smarthome.com) is a switch panel that sits flush with wall. With the Insteon Hub ($79.99 on smarthome.com), its two outlets are automated and individually controllable from the app which works with Android, iOS and Windows phones, with support for Cortana voice commands. 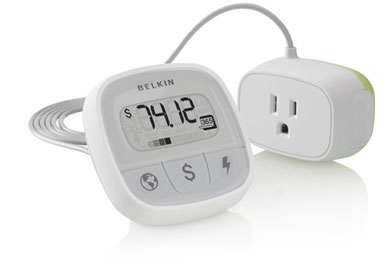 Devices that are left plugged in continue to draw small amounts of energy that can add up when you consider the numerous tiny (and large) appliances in your home. Cutting off the power is easy if its socket already has a power flick. But if the switches in your home don't, turn them eco-friendly with a Belkin Conserve Power Switch ($8.97 on Amazon). At less than $9.00 each, it's a low-cost way to eliminate energy spent on appliances that don't need any.

For harder to reach appliances – and for more automated control - check out the Smart Strip LCG3M Surge Protector ($34.99 on Amazon) which comes with ten outlets and auto-switch tech that automatically turns off power when appliances aren't being used.

Finally, do an audit on your electronics – get an energy usage monitor that can plug into every appliance in the house and give you an on-the-spot energy spend in Kilowatts. The Kill a Watt Edge ($37.40 on Amazon) also calculates your Carbon Footprint and assesses power quality, by tracking voltage and line frequency, to ensure your appliances aren't being stressed by a poor connection. The Kill a Watt Edge also helps you save energy with its built-in motion sensor to turn off connected devices when you’re not in the room. For a more basic monitor, consider the Belkin Conserve Insight ($25.65 on Amazon) which displays your estimated spend in cold hard dollars plus the carbon dioxide produced.

But thats not all

Don’t get me wrong, these technologies are great, innovative, ecological and a real emblem of the future.
The problem I have with this article is that its not the changes you should be doing to you your way of life in order to lower your bills, its the fact that you should be changing suppliers in order to get a better rate. The energy market is flawed, the information available to consumers is imperfect.
This is why there are new companies, personal energy shoppers which will switch suppliers for you, the one I have been using is called Flipper (http://flipper.community) and they only charge £25 to sign up and will find you the best deal for your home, this saved me nearly £400 and I live in a one bedroom studio flat.
If you don’t want to the hassle but want to cut the cost I would recommend looking into it, in any case your already losing money so it can’t make you lose any more!