If you’re spending more time at home, yet still craving the morning cappuccino or latte you used to pick up at your local Starbucks or hipster coffee spot, the DeLonghi Eletta is just what you’re looking for. As a true “super-automatic” cappuccino maker, the Eletta will do everything from grinding your beans to extracting the perfect espresso shot to dosing out the exact ratio of creamy foam – all with the simple push of a button. It’s like having your own personal barista at home, no tipping required. 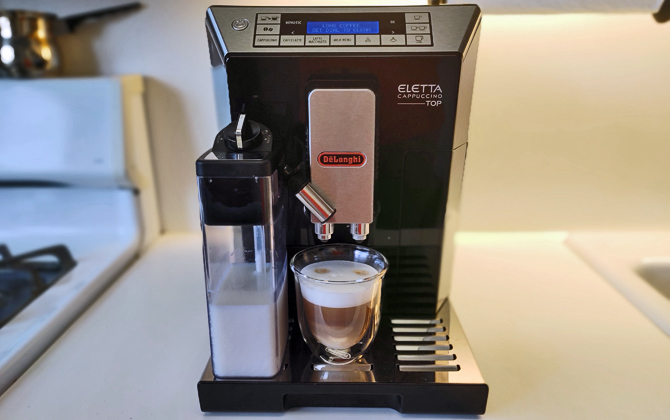 I’ve spent two months with the DeLonghi Eletta in my home office, creating hundreds of drinks (432 according to the built-in drink counter), and have gotten a clear sense of where the Eletta excels, as well as some of the drawbacks. I also compared it head-to-head with a Techlicious long-time favorite, the pod-based Nespresso Lattissima Pro (also made by DeLonghi). Here’s what I think.

If you really love your coffee, nothing matters more than taste. That said, plenty of people are more than satisfied by their daily Starbucks latte, which many coffee snobs would thumb their noses at. So, it’s worth evaluating the taste of espressos and cappuccinos from the Eletta both for coffee purists and for the general masses who need their caffeine fix.

For the snobs among us, the Eletta will be a perfectly satisfactory option to heading out to your local shop or making drinks with a more time-consuming manual machine. In its standard settings, the Eletta produces a very good cup of espresso with a beautiful crema. Maybe not up to the best results an experienced person can coax from a manual machine, but certainly close enough, given the ease of use. And more than a match for your standard Starbucks pour. 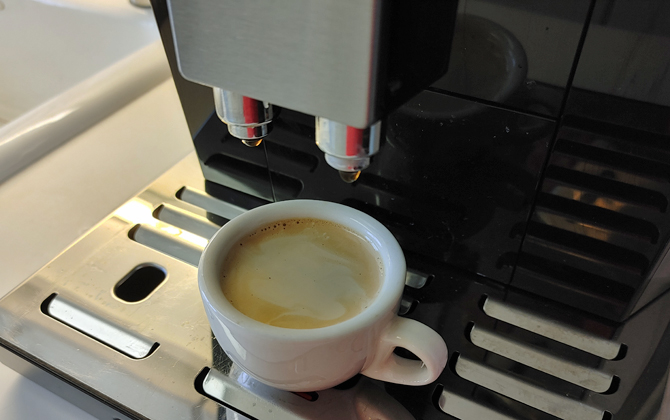 Unlike the coffee choice limitations of Nespresso and other pod-based systems, you can use your favorite fair-trade beans from a trendy micro-roaster or just pick up a bag at the market – it’s up to you. And purists will appreciate that the flavors can be adjusted to your taste (and the nature of your beans) with several customization controls, which I will cover in the Customizing the Brewing of your Coffee section below.

Compared head-to-head with the Nespresso Lattissima, the Eletta is the winner. You have far more choice in beans, and the taste of truly fresh ground coffee. We still like the Nespresso, but it just isn’t a fair battle when it comes to espresso.

The whole premise of a super-automatic espresso/cappuccino machine is to do as much of the work for you as possible, while still producing the best cup of coffee. Many super-automatics stop at the “espresso” part – they’ll grind the beans and dispense a cup of espresso, but the milk frothing is still up to you. The Eletta fixes that issue by providing a milk storage and frothing combo unit (holds a max of 600ml). Press the cappuccino or latte button and the Eletta dispenses the appropriate quantity of milk. Three settings on the frother let you select the quantity of foam and you can customize the quantity of milk, too, if desired. When done, you turn the knob for the Eletta to run a quick auto-rinse and you can pop the unit in the fridge to keep milk cold for next time. 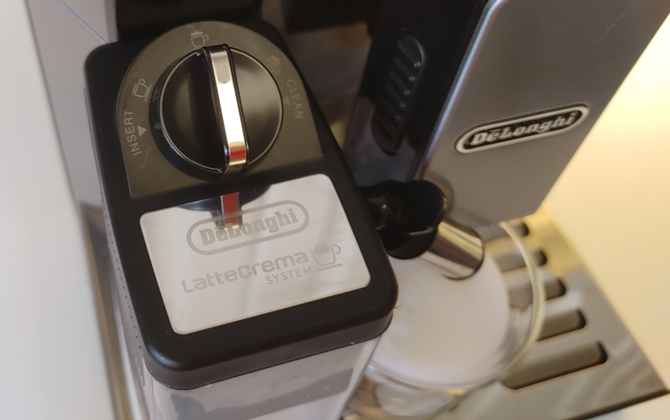 The integrated milk dispenser produces respectable foam for cappuccinos, but it can’t quite equal the creamy microfoam experts get using a manual frother. Here, snobs will be somewhat disappointed, though they always have the option of using the manual frother included with the Eletta. Starbucks fans will be perfectly fine with the results, which are as good as any Grande Cappuccino I’ve had. The frother is basically identical to the milk dispensing system on the Nespresso Lattissima.

Customizing the brewing of your coffee

Running the Eletta with your own beans on the standard settings produces a pretty good cup of espresso or cappuccino that most people will be more than satisfied with. Though if your tastes differ, or you want to adjust the flavor for different roasts and types of beans, the Eletta offers a number of ways to customize the coffee flavor: 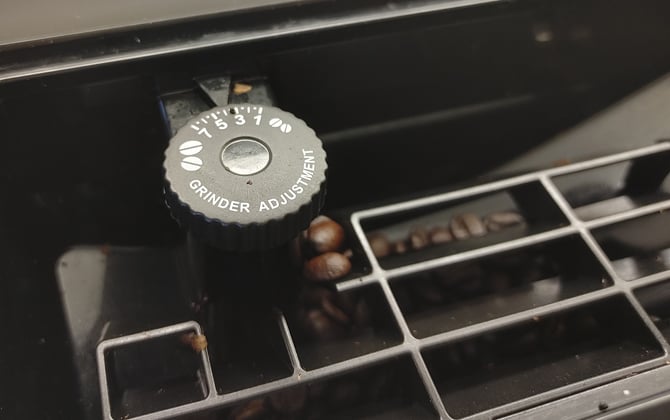 Once you’ve gone through the initial set up for the machine, which takes about 15-20 minutes, including installing the filter in the water tank and going through some basic menu settings, the Eletta is quick and simple to use. Turn it on and the Eletta takes about a minute to warm up. Convenient buttons on the front panel let you select your drink type – single or double shot espresso, long coffee, cappuccino, caffe latte, latte macchiato or straight milk. And you can customize strength, volume and brewing, as I described above.

There’s a drip tray below to catch water from an initial rinse the machine does when first turned on and a final rinse when turned off. The drip tray holds a fair amount of liquid, though I found it easier to just stick a cup under to spout to catch the liquid to avoid cleaning the tray as often. Spent coffee grounds are dispensed into an internal container which can hold 14 drinks worth of grounds. The machine will flash a message when full (or 72 hours after your first drink) – then you can just pull it out and dump in the trash or compost.

The water tank slides out for easy filling and holds 2 liters (though it reads empty when there’s still an inch left, so around 1.8 liters is usable). An integrated water filter (included) can optionally be used to soften your water and will need to be changed every two months. The Eletta also has a water hardness setting in the menu that controls how long the machine will run before you start getting descaling recommendations on the display. The Eletta includes a water hardness test strip, which showed our water to be the highest level of hardness. That was somewhat odd, as New York City is known for having soft water, but I set the machine’s hardness to the high level, anyhow. At that setting, I started getting the descaling message after a little over a month of use – much sooner than I do with my Nespresso Lattissima. The Eletta includes a descaling kit in the box, but the process is time consuming so make sure you set your water hardness to the proper level for your actual conditions. 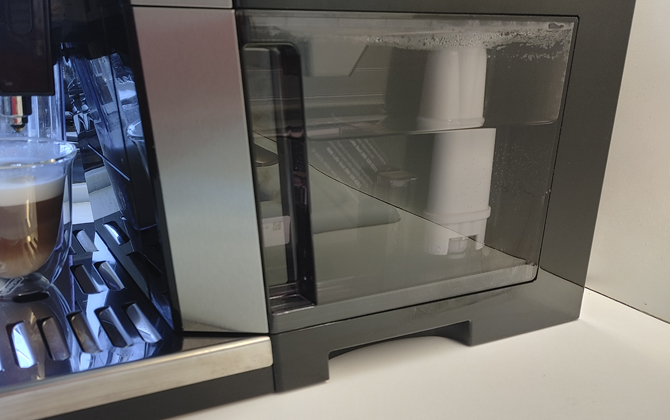 Cleaning the Eletta is straightforward. All of the milk dispenser parts are dishwasher safe and the container is easy to disassemble. You will want to rinse out the drip tray whenever you empty the grounds, otherwise the tray can develop a film.

During my 2+ months of use, I had zero problems with the Eletta. Everything worked exactly it should, with no water leakage from brewing, as I frequently get with my Lattissima, or misplaced grounds. One minor quibble I found during use - the beans container doesn’t give you a warning when it is almost empty, so you can be in the middle of making a cappuccino only to find out you’re out of beans.

The Eletta model I tested, the ECAM45760B, costs $1,999.95 on DeLonghi. It’s also available on Amazon, where reviewers give it a very solid 4.5 out of 5 stars, as of the time this article was written.

Let’s be frank, two thousand bucks is a lot of money to spend on a cappuccino machine. However, when you work out the costs over time, the Eletta is cheaper than a daily Starbucks. Here’s the math. Each shot in the Eletta is about 8 grams of beans, so one pound of coffee with give you about 57 shots. If your beans are $12 per pound, that’s $.21 per shot. Therefore, two cappuccinos (about equal to a Starbucks Grande Cappuccino) will run around $.50, including the cost of the milk. With a typical Starbucks Grande Cappuccino running around $4 with tax, you’re saving $3.50 per drink. A little more math dividing the cost of the Eletta by the drink savings, and the machine pays for itself in about 570 drinks. So around a year and a half, if you’re a daily drinker, or less than a year if you and your spouse are both daily drinkers or have you have two drinks a day.

You can do similar math for the ownership cost benefits of the Eletta over a pod-based system, like the Nespresso Lattissima, which at $.70 and up per pod gets expensive quickly (though still offers a big savings over Starbucks).

For those willing to get more hands on with the espresso making process, a manual machine like the DeLonghi La Specialista Arte (read our review of the Arte) at $699.95 will give you just as good (perhaps even slightly better results) for a lot less money. The trade-off is you need to tamp the beans and froth the milk yourself. 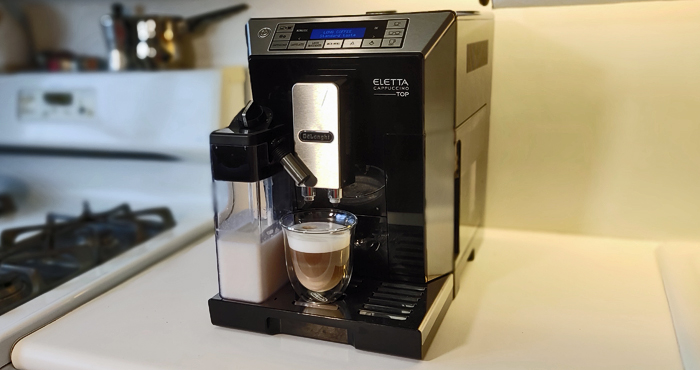 The DeLonghi Eletta is a fabulously convenient fully automatic espresso and cappuccino maker that delivers on taste. If you’re a coffee lover, like I am, you’ll appreciate the quality of the result over pod-based systems, like Nespresso (which are still pretty good), and your typical chain coffee bar. Yes, you can do better with a high-quality manual espresso machine, if you know what you’re doing and you’re willing to put in the effort. But for the rest of us who want a great espresso or cappuccino at home with just the push of a button, the DeLonghi Eletta is an excellent choice.

Josh Kirschner is the co-founder of Techlicious and has been covering consumer tech for more than a decade. In addition to his love of tech, Josh is an avid foodie and home cook who has traveled the world and eaten just about everything. He was voted "Best Chef in the World" by his kids.

When machine comes stop and not working. To fix the damage espresso machines.

Please help to be specialist to repair and maintenance off I error.

Issack In I
Papua New Guinea