If you’re an Android phone user looking for a smartwatch that can make calls and send messages without a smartphone connection, you have a new option, the Fossil Gen 5 LTE ($349 on Fossil and Verizon). The Gen 5 LTE has a crisp 1.28mm AMOLED display, attractive Fossil watch faces, excellent battery life, and tight integration with Google apps, thanks to it running on Wear OS. So, as a Wear OS smartwatch, it’s solid. But poor call quality and Verizon-only service keep me from fully recommending the Gen 5 LTE.

Setting up the Fossil Gen 5 LTE 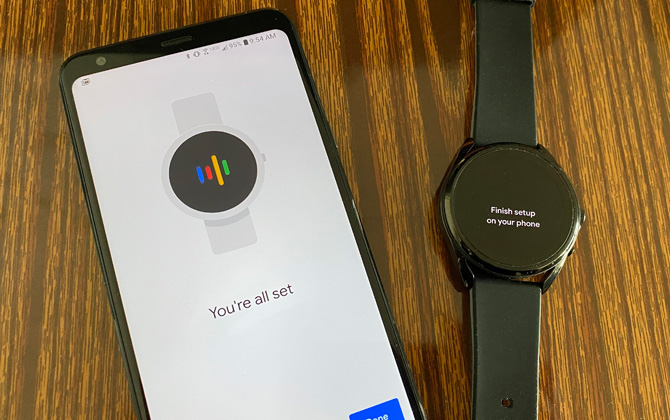 The Fossil Gen 5 LTE only works with Android phones (at least for now), and since Android and Wear OS are both built around your Google account, setup is straightforward. Install the Wear OS app on your phone, turn on the watch, and then follow the simple pairing and setup instructions. The whole process took less than five minutes.

Look and feel of the Fossil Gen 5 LTE

The Fossil Gen 5 LTE feels and looks well made. It has a minimalist design and comes in black with a black silicone strap or a rose gold with a pink silicone strap. The minimalist design is a good thing since the 45mm watch face is quite large; I’m of average height and build for a woman, and the face covers my entire wrist. For such a big watch, though, the Gen 5 LTE is quite comfortable to wear all day. I’m used to wearing a 40mm Apple Watch 5, and the Gen 5 LTE didn’t feel much heavier or bulkier. 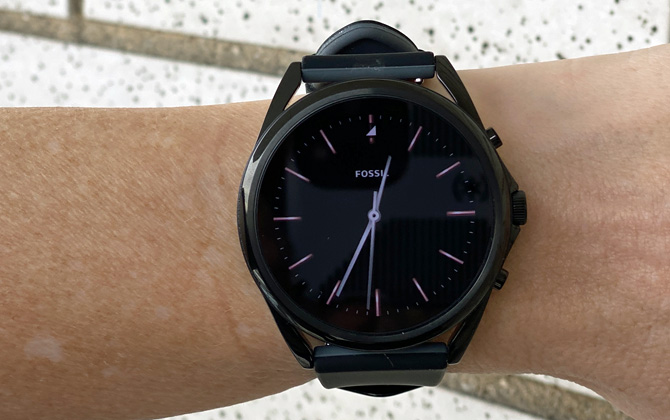 Fossil has a variety of attractive watch faces that you can customize with different patterns, colors, and complications (widgets that show weather, calendar, fitness, or other data). Some faces come preloaded on the watch and there are more available through the Wear OS app that you can download to the watch.

The AMOLED display is crisp and easy to read, and at 1.28 inches, it's comfortable to dial phone numbers and write text messages. With a large font option, reading on the watch is easier for those who normally need light reading glasses, but it wasn't enough for my husband who uses +1.75.

With 3 ATMs of water resistance, the Gen 5 LTE is only splashproof; you can do the dishes or exercise in the rain, but you can’t wear the watch while swimming.

Texting on the Fossil Gen 5 LTE 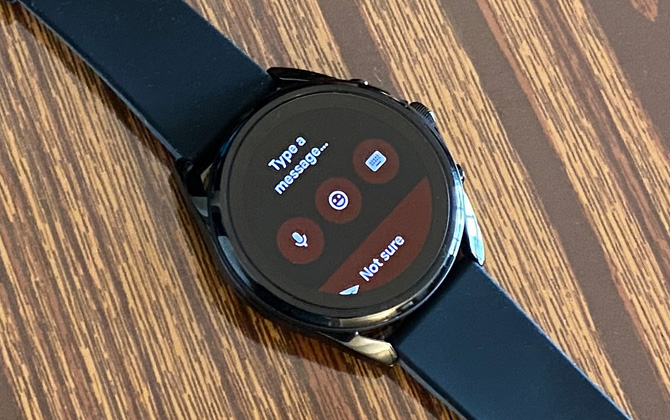 Texting on the Gen 5 LTE is easy. You have your choice of using a keyboard, voice recognition, or handwriting recognition, as well as a full range of emojis. Google also offers quick responses based on the content of the messages.

Text messages come through almost simultaneously on the Gen 5 LTE watch and your phone, so you can feel confident leaving your phone behind. 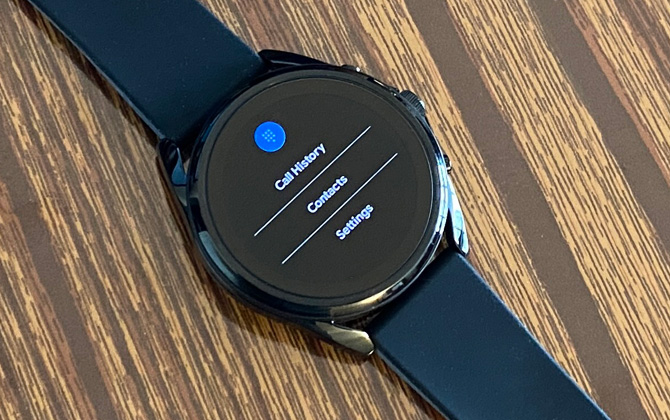 For now, you can only use the Fossil Gen 5 LTE on Verizon’s network — I'm not, so Fossil provided an LG Stylo 5 with Verizon service for testing.

I made phone calls on the Fossil Gen 5 LTE watch from various locations around New York City, and the call quality was consistently poor compared to call quality on an Apple Watch in the same locations. When speaking on the watch directly, the person I called reported a lot of background noise and that my voice sounded tinny. I also used Bluetooth headphones with the Gen 5 LTE, and while the background rustling sounds weren’t there, the voice quality was even worse.

If you want cellular service for quick check-ins and emergency calls, the Gen 5 LTE is adequate. However, I can’t recommend using the Gen 5 LTE for everyday calling.

Working out with the Fossil Gen 5 LTE 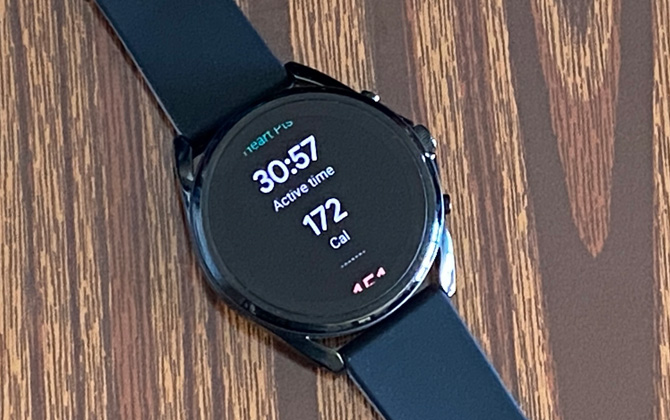 With its large 1.28-inch display, the Fossil Gen 5 LTE keeps important stats in your line of sight during workouts. GPS tracking was a little off, and sometimes the watch had trouble picking back up after losing signal, but I’ve found that to be the case with most wearables in New York City. In addition to Google Fit, you’ll find high-quality fitness apps that run on Wear OS, including Strava, Ride with GPS, and Nike Run Club, but it's not nearly the selection you would get through your Android phone, and far fewer than available for Apple Watch. 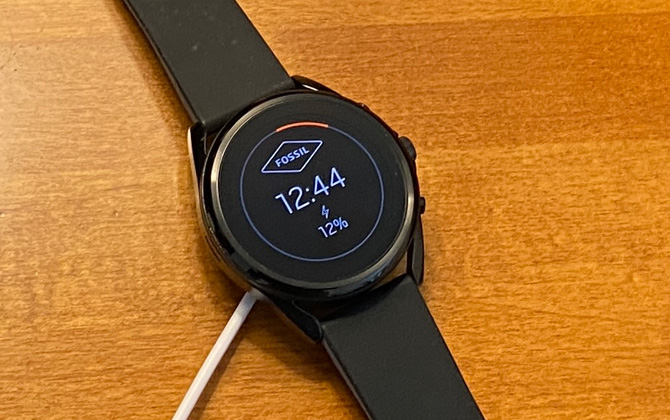 The Fossil Gen 5 LTE easily lasted all day during testing. To test battery life, I used "Daily" mode to keep all functions on, including cellular, “Always-on screen” (so I could always see the time), and “Tilt to wake screen” (to quickly check the information that appeared on the watch face complications). I also worked out for 30 minutes with the watch actively tracking my progress. Every day the watch had battery life left when I went to bed.

If you need the battery to last longer, the Gen 5 LTE has three battery saving modes: Extended, Time Only, and Custom. Extended turns off your cellular service and the always-on display (you have to press the crown to see the display) but leaves on Bluetooth (during daytime hours only), NFC (for payments), step and heart rate tracking, and notifications. Time Only is self-explanatory. But, I’d recommend using Custom mode, which lets you play with all of the battery-saving settings to find the perfect balance for you. 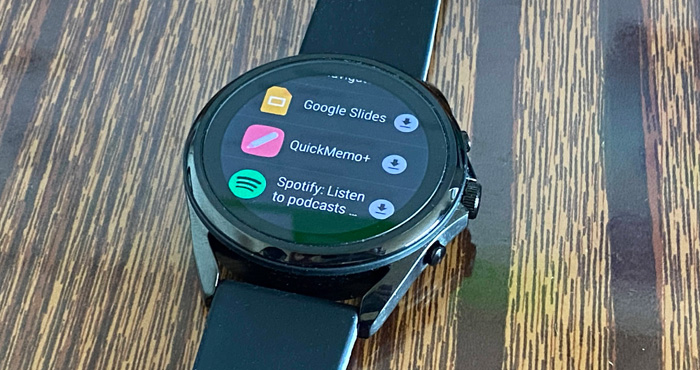 Many of the app basics are covered by Wear OS, including Google Pay, and you’ll find apps by the big players in fitness, wellness, music, and more.

However, you can’t download music or stream over your LTE cellular connection from any of the major music services, including Google’s own YouTube Music (there isn’t even a Wear OS app for YouTube Music). If you want streaming music on the go, you will have to bring your phone with you and then you can use the Gen 5 LTE to control playback. You can also store MP3 files on the watch for playback, but not downloaded Spotify songs, for example.

Overall, the app selection for Google’s Wear OS is lackluster when compared to Apple WatchOS and Samsung's Tizen platform.

When it comes to LTE smartwatches, there are only a handful to choose from in the U.S. — Apple Watch, Samsung Galaxy watches, Mobvoi’s TicWatch Pro 4G/LTE, and now Fossil’s Gen 5 LTE.

If you have an Android phone, it doesn’t make sense to buy an Apple Watch since a lot of the Apple Watch functionality is tied to iPhone apps and features.

Samsung is the biggest LTE smartwatch player for Android phone users. Samsung's latest Galaxy Watches offer oxygen-level, VO2-max, sleep, stress monitoring, and fall detection, which Fossil doesn't. The Galaxy Watches also have an IP68 rating, which means you can wear them while swimming, unlike the Gen 5 LTE. Most importantly for those not on Verizon, the Galaxy Smart Watches are available on all major U.S. carries. The latest model, the Samsung Galaxy Watch3 (from $449, on sale for $299, check price on Amazon) has blood pressure monitoring, 8GB of memory and a manually-rotating bezel to control the watch. There's also the Galaxy Watch Active2 (from $279, check price on Amazon), which has 4GB of memory and a touch bezel.

If you have a Samsung phone, it makes sense to buy a Galaxy Watch model because of the tight integration with Samsung’s apps. If you don't have a Samsung phone, it's not such a clear choice. The Galaxy Watches are more difficult to set up with non-Samsung phones (there are multiple apps and plug-ins to install), you get Samsung's sub-standard Bixby instead of Google Assistant, and people report issues with getting Samsung Pay to work properly (and Google Pay is not available).

Your only other Wear OS LTE choice is the 45mm Mobvoi TicWatch Pro 4G/LTE ($299, check price on Amazon), whose styling is decidedly heavier and more clunky.

Should you buy the Fossil Gen 5 LTE?

A few things limit the Fossil Gen 5 LTE. First and foremost, you can only buy it if you’re a Verizon customer and use an Android phone. And with poor call quality and the inability of Wear OS to stream music, you won’t be using the Gen 5 LTE away from your smartphone for everyday use. Finally, you can’t wear the watch when swimming.

However, if you don’t own a Samsung phone and you're a happy Verizon customer, the Fossil Gen 5 LTE could be the right LTE smartwatch choice. The Gen 5 LTE covers all of the smartwatch basics, has sleek styling, and integrates smoothly with all of your Google services.

The Fossil Gen 5 LTE is available on Fossil and Verizon for $349 and requires a $10 per month line fee on Verizon for cellular service.