The Cuisinart Chef’s Convection Toaster Oven (model TOB-260N) is our award winner for the best toaster oven based on its combination of excellent cooking results, food capacity and convenience features (click here to see our full Best Toaster Oven test results)  The Cuisinart nails all the day-to-day basics and can easily serve as a full-size oven substitute.

[Editor's Note: Some of this content is taken directly from our Best Toaster Oven review article]

The Cuisinart Chef’s Convection Toaster Oven is a full-size model that has plenty of capacity to handle six slices of toast, a 12-inch frozen pizza or roast a 3-lb chicken. The Cuisinart Chef’s Convection Toaster Oven offers more interior capacity (.95 cubic feet) than the highly-popular Breville Smart Oven line (.8 cubic feet), and dwarfs the Hamilton Beach Set & Forget Toaster Oven and Kenmore Elite Digital Countertop Convection Oven.  In fact, the Cuisinart’s interior is large enough that it can actually cook with two interior racks at once (included in the box), a major benefit.

The downside to the extra capacity is the extra counter space it takes up in your kitchen. With my dainty NYC- sized kitchen, the Cuisinart was too big an appliance.

Any device that includes “toaster” in its name should be able to toast; something my old Cuisinart never lived up to. However, the new Cuisinart is far better, with bread relatively equally toasted between top and bottom. The Cuisinart also offers a “bagel mode”, which lets you brown just the top part of your bagel or English muffin. Here's how the Cuisinart performed versus the other models.

Interestingly, we found that toasting evenness has a lot more to do with your bread than your toaster. As you can see in the comparison shot, the top of the slice was consistently more toasted than the bottom, regardless of toaster or orientation. We presume this is due to lower moisture levels at the top of the loaf.

Next, we tested toasting speed.  After all, no one wants to sit around in the morning waiting for their toast to get done. So we let each model go for 4 minutes then pulled out the bread to evaluate the level of toastiness. 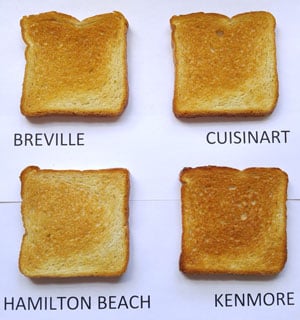 The Kenmore provided the most toasting, just ahead of the Cuisinart.  While the Cuisinart was neck-and-neck with the Breville.

We tested the Cuisinart on a frozen 12-inch pizza using its pre-defined “pizza mode”. The Cuisinart also comes with a pizza stone included in the box. However, it arrived broken, so we had to go without.

The Cuisinart, cranked out pizza a few minutes faster than the other ovens in our test, but was the least even.Those ovens that cooked slowest, the Kenmore and the Hamilton Beach, also cooked the most evenly.

That being said, we're actually calling this one a tie, because the pizza modes on any of the ovens can be customized to cook at whatever temperature you want (you don't need to stick with the factory preset). It’s a simple matter to dial down the Cuisinart to cook slightly slower. And our six person taste test (including three hungry kids), found that all the pizzas tasted pretty much the same, regardless of how even they appeared on top.

Cooking pizzas is fine, and all that, but to really be an “oven” the contenders needed to prove their worth as a true substitute or backup for the full-sized oven in our kitchen. So, we went with the standard dish that every oven needs to be able to nail—roasting a chicken.

We used four identical 3.5-pound birds for our test.  The birds were seasoned with salt and herbs and popped in the ovens to convection cook at 400F until our thigh temperature measurements were at 160F using a Thermopen. The Hamilton Beach includes a built-in temperature probe, so we stuck that in the chicken and set it to 160F, as well (at which point the oven beeps and shut off).

All four of the ovens did a surprisingly good job with the birds - better, actually, than our non-convection standard kitchen range. But the Cuisinart Chef’s Convection Toaster Oven was the runaway winner here. Its “Speed Convection” mode delivered the fastest cooking time, evenly cooked meat and, most importantly, beautifully browned skin.

What better way to finish off our testing than with trays of freshly-baked chocolate chip cookies? We used store-bought dough (hey, this is a toaster oven review, not a cooking class!) and baked at 350F for 12 minutes.

The slower cooking Kenmore delivered the most even browned cookies, followed closely by the Breville, but the Cuisinart and Hamilton Beach weren't far behind. You'll be happy with the Cuisinart's results.

The Cuisinart Chef’s Convection Toaster Oven uses a combination of knobs and buttons to set the various cooking modes and temperatures. If it all sounds confusing, it is. But after a few times through you get the hang of it. And, once you have your cooking presets set the way you want them (e.g., you can dial down the temperature for Pizza mode or turn off convection for Cookies), the process is pretty easy. Surprisingly, given its high price, the Cuisinart’s control knob felt cheaper than the Breville and the Kenmore’s, with the “clicks” not always lining up to menu choices on the display.

The Cuisinart has a clock on its display; in case you rely on your toaster oven to keep you on schedule.

With their small door openings and hot metal surfaces, both inside and out, we considered the safety of my toaster oven to be an important consideration. This is especially true for families where children use the toaster oven frequently to make toast and reheat pizza.

In this department, the Breville and Cuisinart again stood out from the less expensive contenders. Both have catches on the doors (magnetic for the Breville and a hook for the Cuisinart) that will automatically pull out the cooking rack – no need to reach in to grab your hot trays. Each also has a safety catch on the main rack level to prevent the rack from sliding out all the way.

The Cuisinart was the only model in our group that had an interior light, which we found handy, especially given the oven’s relatively cavernous size. The Breville BOV845BSS, which wasn't available at time of testing, includes an oven light for an extra $20 over our tested model, the BOV810BSS.

The Cuisinart tops the charts with a very strong 4.8 out of 5 star rating on Amazon and no major complaints.

Should you experience problems, the Cuisinart has a 3-year warranty; while the Breville only comes with a 1-year warranty.

The Cuisinart Chef’s Convection Toaster Oven performed at or near the top in all of our cooking tests. And, it offers more food capacity than any of the other models we tested, making it the most viable substitute for your full-sized home oven. It also happened to get the strongest user reviews on Amazon, demonstrating that this is a consistent top performer. It gets our pick for the Best Toaster Oven.

These are also extremely easy

These are also extremely easy to clean even non-professionally. Our clients are always satisfied with them from what we hear as well.
Great non-biased review, by the way, well done.