Review of the LG CordZero A9 Ultimate Stick Vac

The LG CordZero A9 Ultimate is one of more than half a dozen stick vacuum cleaners that I've been testing over the last year or so. Aside from suction power (all that I've tested have been good enough for everyday cleaning), it's the features, functions, and price that provide the greatest points of differentiation. For the CordZero A9, two main attributes set it apart from the competition – one pro and one con. 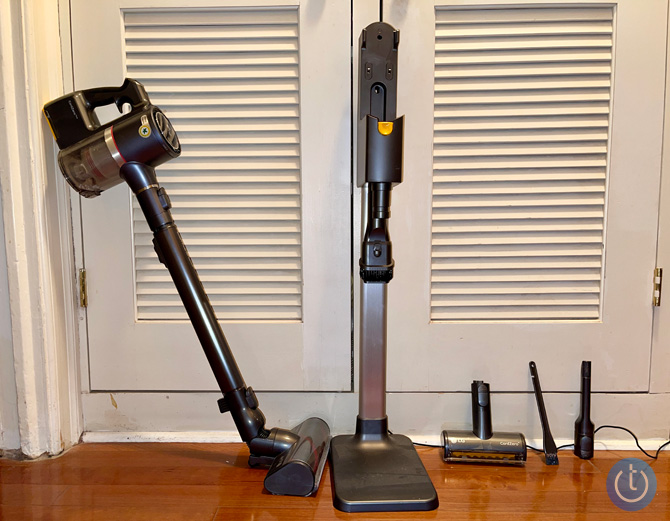 On the pro side, the CordZero A9's primary tube wand collapses from 27 to 18 inches. So when it's resting in its floor-standing charging dock, the CordZero A9 is only 35 inches tall, around a foot shorter than most stick vacs in their wall-mounted charging docks. With its short stature, the CordZero A9 can sit on the blind side of a credenza or cabinet, essentially unseen from most points in an otherwise well-appointed room, or even moved to a closet when company comes.

On the con side, the CordZero A9 has a smaller than average dustbin capacity. There is a red push-down latch, which LG calls the Kompressor, that compacts the debris, so you don't need to empty the dustbin that often. However, the smaller capacity resulted in clogs.

During my testing of the CordZero A9 Ultimate, I also tested:

Each model was evaluated on how well it handled a thick pile oriental rug with flour (as a stand-in for dust), sand, long and short human hair, pet hair (rabbit), shredded paper, and Cheerios – singularly and mixed together.

The CordZero A9 Ultimate has above-average suction and a clever telescoping design. However, its small dustbin and resulting clog propensity make this stick vac difficult to recommend over its premium competitors, including the Dyson V15 Detect.

Setting up the LG CordZero A9 Ultimate

The LG CordZero A9 Ultimate comes fully loaded, with a stand-up charging dock, two batteries, and a variety of attachments:

LG sells around a half dozen other cleaning attachments to accessorize the CordZero further.

For storage, the LG CordZero A9 Ultimate uses a stand-up charging dock that the CordZero slides onto and also conveniently accommodates the included second bright yellow /orange rechargeable battery and two of the four cleaning attachments. The other attachments can be arranged atop the floor plate of the stand. The 9-inch-long cleaning brush tool, helpful to get at any stubborn debris in the dustbin, can nest inside one of the other attachments clicked into the charging dock – but don't, because you'll need to access the tool frequently for cleaning and clearing jams. The thin AC cable can be channeled down the rear of the stand and is easily unplugged, making it easy to hide the stand and vac in a closet temporarily or permanently if there's an AC outlet inside.

It takes a shorter-than-usual 3.5 hours to simultaneously charge the CordZero's batteries – one in the dock and one in the vac. And with two charged batteries to start your cleaning, you get 80 minutes of power when the CordZero is used in handheld mode, then 60, 18, and 12 minutes in Normal, Power, and Turbo power modes, respectively.

LG claims the CordZero delivers 140 watts of air suction power which, on the surface, does not compare favorably with the 230 air watts of suction claimed by Dyson for its V15 Detect. But LG says that Dyson measures its suction power by the nozzle closest to the dustbin while LG measures at the inlet closest to the floor. So the best test is in comparative usage.

Using the LG CordZero A9 Ultimate

The LG Cord Zero A9 Ultimate can be used single-handed. Instead of a trigger to keep depressed, on the top of the handle, within easy thumb reach, there are three buttons: one for power, one to increase power (the "+" button), and one to decrease power (the "-" button). Pressing and holding the "+" button puts the stick vac in turbo mode. 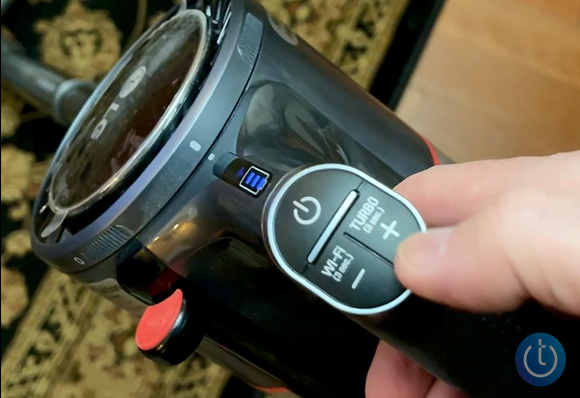 At 5.63 pounds without accessories, the CordZero is relatively light compared to the Miele Triflex and Dyson V15 Detect, making it easier to push and pull across thick carpets and keep elevated for handheld cleaning. Pushing becomes a challenge only in the infrequently used Turbo mode, in which the CordZero is also the loudest stick vac I tested, registering 84db. In the default Normal (low) or Power (medium) mode, the CordZero is no noisier than any other stick vac.

The CordZero's default mode is its lowest Normal setting, but its middle Power mode is the best combination of suction power and pushing ease. Even in Power mode, though, it might take an extra pass to suck up all debris compared to the leaders in my testing, the Miele Triflex and the powerful Dyson V15.

CordZero's above-average suction versus the broader group also assumes you're vacuuming normal dust and dirt in rugs and carpets. My tests with sand and hair, both human and rabbit, posed no undo problems. However, a few handfuls of shredded paper or Cheerios quickly filled the CordZero's small 0.4-liter dustbin and caused clogging – not only the bin but nearly the entire length of the connecting wand – and shutdowns. 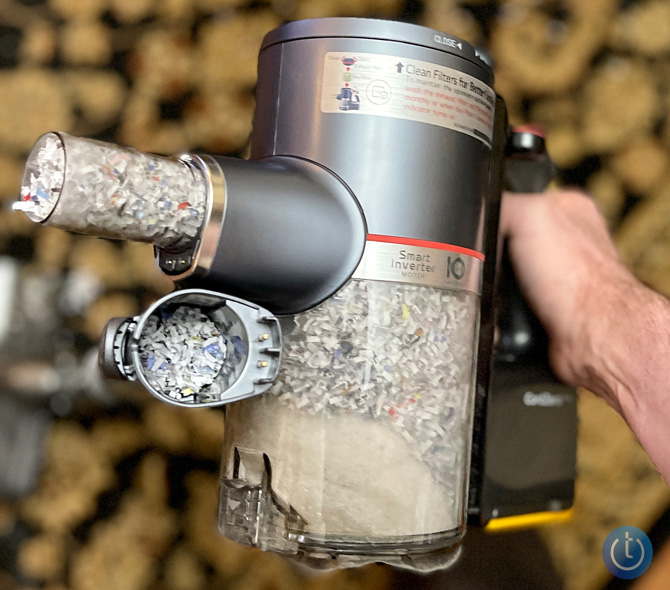 Admittedly, it's unlikely you'll encounter a mass of shredded paper, Cheerios, or other larger particles that need to be vacuumed at one time. Keeping a close eye on the dustbin, liberal use of the Kompressor, and frequent dustbin emptying should forestall any clogs. But I encountered few similar large particle jamming issues with other stick vacs I tested across various price points. For instance, the $199 Proscenic P10 Pro, the least expensive of the stick vacs I tested but equipped with a .65 liter dustbin, managed to suction up nearly three handfuls of shredded paper before it ceased sucking (but still running). At the same time, the LG jammed and shut down after only about two handfuls. In many ways, LG's inclusion of the Kompressor and the cleaning brush tool almost makes me think the company expected more frequent jams.

Clearing clogs presents more challenges. Make sure you disassemble a clogged CordZero over a garbage can since debris that has been blocked drops out of the cleaning head, the wand, and the dustbin connecting tubes once detached. Shredded paper caused such heavy jams in the wand that it was difficult to clear out. The included cleaning brush tool isn't long enough, and tapping against a garbage can was barely sufficient. I found the quickest clearing method for a clogged wand was snaking a straightened wire hanger through it.

CordZero's Power Floor Nozzle isn't as effective on bare floors as either the Dyson V15's primary cleaning head or the V15's specialized bare floor Slim Fluffy head, especially on larger particles, which CordZero tends to push forward before sucking up on a pull pass. In my Cheerios test, the CordZero spit a few pieces across the kitchen.

The CordZero is the only stick vac I tested with an associated app, in this case, the LG ThinQ app.

Once the CordZero is connected, the app tells you how often and for how long you've used the CordZero. That's further broken down into what modes you've used over weeks, months, or the year. None of the information is essential. More useful is the app's Smart Diagnosis, which informs you of your CordZero's operational condition along with maintenance tips. The app also lets you know when charging is complete – I even got a "fully charged" update on my Apple Watch. The app conveniently includes the user guide and filter cleaning instructions.

Maintaining the LG CordZero A9 Ultimate

As noted, clearing jams can be a challenge. So can hair. CordZero's roller is black, making it hard to discern dark hair wound around it. Most stick vac rollers are more brightly hued to make hair of any color easy to see. While the CordZero's rollers brushes are raised, there are no grooves to slip a knife or scissors into to cut away tightly wound locks easily. 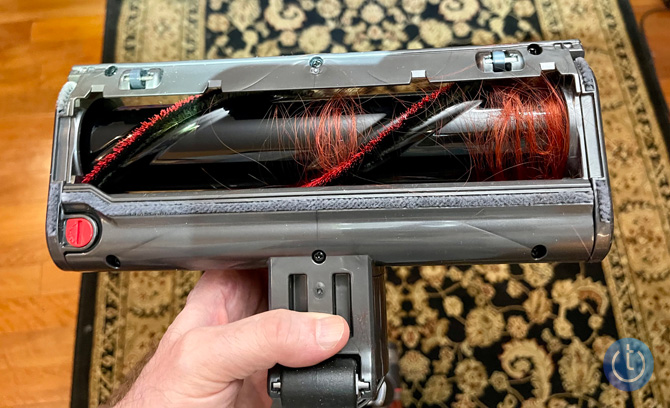 As with most stick vacs, the CordZero includes two filters. A cap on the top of the motor easily twists open to reveal the washable cloth pre-filter. Located inside the dustbin is the metallic tubular cyclonic mesh filter, which also can be washed, but you oddly need the crevice cleaning tool to twist and remove it; you can twist it back into place by hand, though. The included cleaning brush tool helps clear any stubborn debris in the cyclonic filter housing and dustbin, which CANNOT be washed under a faucet, as can the dustbins of other stick vacs. Instead, you are bizarrely instructed to wrap a wet paper towel around the cleaning brush tool to wash around the filter housing.

I loved almost everything about the LG CordZero ergonomics, and it provides above-average suction. And when limited to normal, everyday vacuuming (excluding large particle spills), the CordZero A9 provides a comfortable and efficient cleaning experience. However, the vac suffers from a small dustbin and lack of a display to let users know what power mode they're in, how much vacuuming time remains, and when the dustbin is at capacity and in danger of clogging. As a result, the CordZero A9 Ultimate is hard to recommend over other premium stick vacs.