Regardless of your budget, your first consideration when buying a TV is image quality. But with so many high-quality sets to choose from, setup, operation, and ease-of-use should factor into your decision as well.

For setup, what kind of stand or wall-mounting will you need? Will a soundbar fit underneath? Where is the jack pack located on the TV in relation to your other devices, like your cable box or gaming console, and will your HDMI cables be long enough? How many ports – and type of ports – there are to connect your devices? Operationally, what streaming services does the set give you access to? How easy is it to find specific shows on these streaming services? How well does the TV integrate with smart home devices or be controlled by voice assistants such as Alexa and Google Assistant? What controls does the remote provide?

After spending hours watching a variety of content and consulting other professional reviewers and reviews, we found the TCL 6-Series 65-inch 4K TV (model number 65R635, $999.99 on TCL, check price on Amazon) offers the best combination of picture quality, price, placement options, and ease of use for under $1,000. Here's why.

It's hard to describe the dense and rich texture of a 4K (aka UHD, ultra high definition) image with its tightly-packed 8 million pixels since it doesn't look like anything you've seen on TV before. All 4K HDR TVs look pretty great, and it's almost impossible to discern the subtle differences between competing models without an intense side-by-side comparison.

Two TCL technical aspects, however, help the TCL stand apart from its competitors.

First is what's called upscaling. The only 4K HDR content available comes from streaming services. However, all of the programming on standard cable TV and over-the-air are transmitted in high definition. This high-definition content must be upconverted to 4K to be displayed on a 4K set – each pixel of a high-definition image essentially is blown up to four pixels, which obviously presents a challenge, especially on a 65-inch screen or larger. When a lower resolution image is badly upconverted to 4K, it can look grainy and unwatchable.

I was pleasantly surprised at how well TCL upscaling performed; regular TV looked extraordinarily sharp and detailed. High-definition images were so crisp and colorful that I started to notice stark differences in performer makeup and the quality of the cameras used, especially for remote interviews from people's homes. I found myself almost constantly tinkering with the picture settings because a 65-inch TV will blow up otherwise unnoticeable picture vagaries between different channels, different shows, even different cameras on the same show.

The 6-Series display is backlit with thousands of mini-LEDs, allowing for 160 dimmable zones in the 65-inch model (what TCL calls Contrast Control Zones) that enable far more precise contrast and deeper black levels than other competing LCD sets. While not on OLED's level, TCLs contrasts and blacks are impressive.

Then there is the natural brightness of a 65-inch LCD TV – it's almost blindingly headache-inducing bright if you sit too close but easily pierces through the brightest-lit sunlit rooms.

The big differentiator between old HDTVs and 4K models is HDR (high dynamic range), technology that creates far wider contrast, color, and details in extremely dark and bright sections of a scene. HDR improvements are far more noticeable than resolution improvements when your streaming content is coded with one of the HDR formats that the TCL is compatible with, HDR10, Dolby Vision, and HLG.

In some cases, the TCL color is too good. Solid reds, oranges, and blues tend to jump out, and, in movies on film, solid off-white or light brown objects tend toward a pea-greenish tint.

Other professional reviewers were also impressed by the TCL 6-Series image quality.  CNET says that "affordable pricing and a bright, punchy image make the 6-Series the TV to beat." TechRadar opines that the 6-Series set "truly is an exceptional value and one that we'd recommend to nearly everyone." And, Rtings found it to have "a very wide color gamut for HDR content, and it gets bright enough in HDR to make highlights really pop." 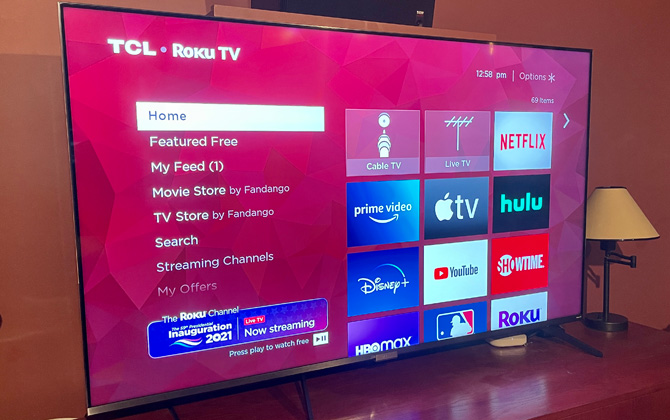 The TCL 6-Series delivers the best streaming experience, thanks to Roku being built-in.

Roku assembles nearly every streaming service extant – including HBO Max, Peacock, and Discovery+ – into one easy-to-navigate on-screen place. Having Roku built into the TV means you don't have to worry about what HDMI "input" your TV is set to when you want to switch from cable to streaming.

Even better is how you navigate Roku. First, you'll notice the tiny remote is a bare-bones affair – no keypad, so you'll still need your cable remote to change channels. But switching to Roku streaming is a dream. Just press the microphone button on the Roku remote. The TV sound mutes, and you simply say the name of the program you want to watch. It doesn't matter on which streaming service your desired content is located. Just say "Queen's Gambit" or "The Morning Show" or "Hamilton" or "Bridgerton," and the TCL will quickly switch to its Roku mode and present you with matching options. In most cases, what you're looking for will be the first choice, so you can simply click "ok" to access the service it's available on –  free options first. Or, you can say an actor's or director's name, even a genre (i.e., "superhero movies" or "romantic comedy"), and Roku will present you a list of options.

On the Roku home screen, you can arrange your desired streaming services in whatever row/column sequence you'd like. If you just want to browse a specific streaming service, the remote includes direct access buttons for Netflix, Disney+, Hulu, or Sling if you've cut the cable cord. The remote also includes power on/off, the familiar on-screen navigation/"Ok" array, content transport controls, a "back" button to rewind 30 seconds, and an asterisk button to access the TCL's copious picture and sound settings. On the right perimeter of the remote are the TV's volume up/down and mute controls.

Done watching your streaming show? Just press the microphone button again and say "cable TV," and you'll be switched back to regular TV. 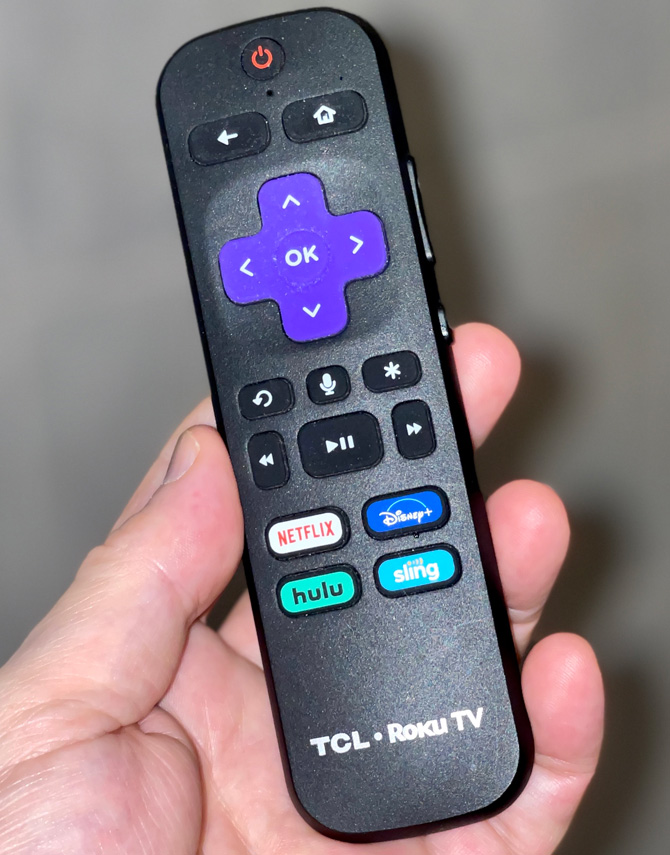 For Amazon Alexa or Google Assistant voice control, set up the TCL 6-Series set through their respective smartphone apps, searching for Roku devices. The 6-Series is also compatible with Apple's HomeKit smart home ecosystem (with control via Siri) and Apple AirPlay to stream content from your Apple devices.

Setting up your TCL 6-Series

A 65-inch TV is admittedly physically daunting. The TCL 6-Series display measures 56.9 x 32.9 x 2.8 inches when wall-mounted or 56.9 x 35.7 x 13.7 inches when sitting on its two screw-in stand feet, and weighs 65.7 pounds with the stand feet, 63.9 pounds without. We recommend two sets of arms when moving the set around. If you're not wall-mounting the set, you'll initially need a large flat semi-elevated surface to lay the TV down flat to screw in the stand feet. I used a couple of sofa cushions.

The 6-Series splayed stand feet are actually one of this TV's best features. First, you get multiple placement options for the stand feet. You can screw them into the bottom of the set so they're wide apart – around 5 inches from either end of the set with 46 inches between them, enough to tuck a soundbar between them and under the set. Or, you can screw the feet more toward the middle if you've got a cabinet or TV stand as narrow as 24 inches wide. Or, you can screw one stand foot at the end and the other toward the middle, which I had to do because of my unique AV cabinet placement and configuration. Regardless of the feet stand arrangement, the TV remains completely stable.

Second best, the rear part of the feet stands are hollow; you lift off the top, lay the power and HDMI or other cables inside, and then put the cap back on, which keeps your cabinet top uncluttered. These feet stand channels can accommodate two or three cables each, depending on each cable's girth.

Instead of a placement-neutral centered rear AC jack, the five-foot-long 6-Series ungrounded (two-pronged) power cable gets plugged into the left side of the set, which may present an issue depending on where your closest AC wall outlet is located.

TCL placed all its connecting jacks on the right side of the set, so make sure you have long enough HDMI cables to reach your cable box, Blu-ray player, video game console, or other set-top boxes. 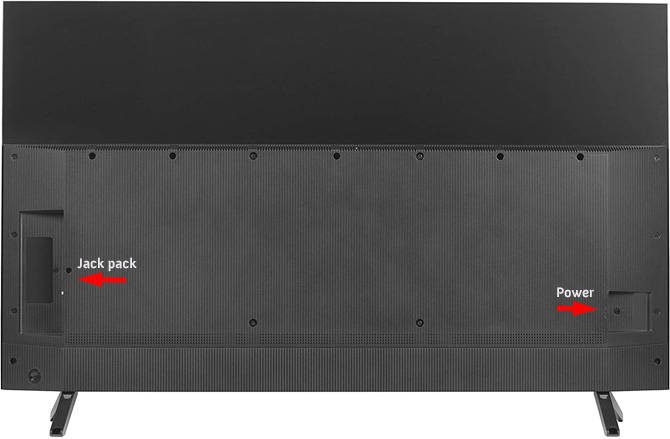 You'll find the ports stacked vertically in a notch on the right side of the set behind the screen. There's an Ethernet jack, three standard HDMI jacks, one ARC-enabled HDMI jack (to connect a compatible soundbar, so you only need one remote for the TV and audio), a coaxial cable/antenna terminal, a USB port, a yellow 3.5mm A/V in jack for connecting an older analog video device, a 3.5mm headphone jack, and an optical audio output.

Sadly, the 6-Series set doesn't include Bluetooth for wireless listening, though there are plenty of plug-in Bluetooth options, and many soundbars include built-in Bluetooth, including from Roku.

Based on our experience, other reviews, and my conversations with other reviewers, the TCL 65-inch 6-Series (model number 65R635) has the best image quality for an LCD-based 4K TV under $1,000. And, with its flexible and clever design and easy-to-use Roku interface, we name it our top pick for the best TV under $1,000.

A FullHD image has a horizontal resolution of 1980 pixels (2K), in contrast to the 3840 horizontal pixels of 4K. We abbreviated it as 2K in the story. But since that may be causing confusion, we’ve edited the story to replace those mentions with “high definition”.

2560 horizontal pixels is 2k…which is QHD or WQHD.

We were using 2K as a generic term for resolution in the 2,000 pixel range - both 1980 and 2560 fall under this umbrella. The “official” 2K definition, to the extent there is one, refers to 2K projectors (2048). Again, since we realize this was causing confusion, and since we also incorporated 720p content into our testing, we edited the story to replace the 2K reference with “high definition”.

The T.V are the best

The T.V are the best piece whys and picture why I love this brand. Of TV . I would put my money where my mouth is this I one of the best buys hand up