Panasonic has finally come to market with a larger version of its highly regarded FlashXpress toaster oven. The Panasonic NB-W250 High Speed Toaster Oven offers the same instant-on infrared heating elements of the FlashXpress, which greatly reduce preheating and cooking times, in a full-size .9 cubic foot package. In short, there’s a lot to like in this new package, especially its $79.99 retail price. But it also faces stiff, if considerably more expensive, competition from the Breville Smart Oven Plus ($299.99) and our top pick, the Cuisinart Chef’s Convection Toaster Oven ($279.99). And when compared to these higher-end models, the Panasonic falls short on features and cooking ability. But if your toaster oven budget is keeping you below $100, the Panasonic NB-W250 is a great choice.

The Panasonic High Speed Toaster Oven fits squarely in the full-size toaster oven category, capable of toasting six slices of bread, roasting a 3-lb. chicken or cooking a 12-inch pizza. With a .9 cubic foot interior, it is marginally smaller than the Cuisinart Chef’s Convection Toaster Oven’s .95 cubic feet, and slightly larger than the Breville Smart Oven’s .8 cubic feet. In practice, this won’t make much difference when cooking, since all can handle the same number of toast slices and pizza sizes. However, the Cuisinart’s extra capacity allows for two interior racks, a nice bonus.

The Panasonic does have the advantage, though, when it comes to external dimensions. It’s only 18 inches wide, a half inch narrower than the Breville and a full two inches narrower than the Cuisinart, making it the least demanding of your precious countertop space. Maybe not a big deal for those in large suburban homes, but it’s the only full-size toaster oven I’ve tested that fits on the counter in my New York City apartment kitchen.

One of the big advantages of the Panasonic High Speed is it provides…well…speedy heating from its infrared heating elements, toasting up to six slices of bread, bagels and English muffins quickly and relatively evenly – certainly on par with the Cuisinart and Breville, perhaps a little better – at least on top. The bottoms were considerably lighter, so you will need to flip if you want it equally done on both sides. [Note: In our Best Toaster Oven review from 2016, I found that the moisture of the bread has considerable impact on toasting evenness and speed, making apples-to-apples comparisons across models difficult]. The Panasonic has settings for number of slices and level of darkness, as well as a “bagel mode” for browning just the tops bagels and English muffins. 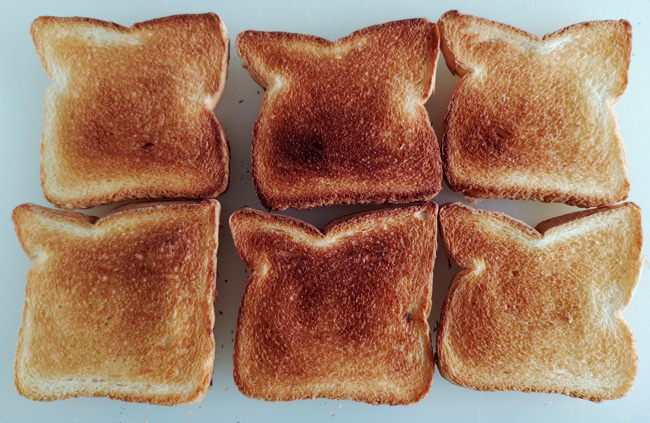 For our pizza test, I picked up a 12-inch DiGiorno frozen pizza and used the Panasonic’s “pizza mode” (adjustable by pizza size: 6, 9 or 12 inches) to see how it came out. With no preheating necessary, I just popped it in and let ‘er rip. Because the DiGiorno is on the thick side, it wasn’t quite to our liking when the standard pizza mode time was up, so I ended up adding a few more minutes (easy to do). The result was the most evenly cooked pizza we’ve made in our testing, with a crisp bottom crust and nicely browned cheese across the top. As a New Yorker, it’s certainly not going to replace my local pizza joints, but it was pretty darn good. 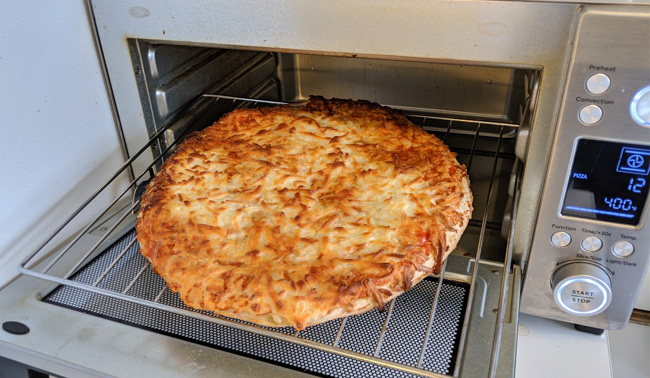 One of the benefits of a toaster “oven” is that it can serve as a second oven for cooking multiple dishes during dinner parties, or even serve as your main oven when you don’t feel like cranking up your larger range. And in our tests with the Cuisinart and Breville toaster ovens using their convection feature they actually produced BETTER results roasting chicken than our non-convection full-size kitchen range.

Sadly, this was not the case with the Panasonic. Chickens and other roast meats or vegetables take some time to cook – maybe 20-25 minutes for roast vegetables and 45-60 minutes for a roast chicken, depending on size. Yet, about 20 minutes into our cooking test using a 3.5-pound bird at 400F, I noticed the skin was not browning as expected because convection mode wasn’t running. Assuming I must have made a mistake, I turned it on and let it go. Fifteen minutes later, I noticed convection was off again. Ultimately, I got the bird cooked, but it required constant resetting of the convection feature, and the skin was not evenly browned because of the shut-offs. 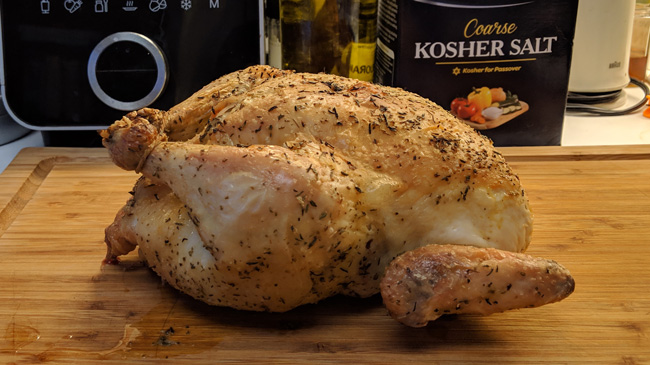 Trying to figure out what was going on, I turned to the user manual (crazy, right?). There, buried in the notes, I learned that convection will automatically turn off after 10 minutes whenever the temperature is set over 350F. Worse, I also learned that when then temperature is set above 390F in ANY mode, the oven will automatically lower the temperature to 380F after 14 minutes. The manual than unhelpfully suggests “In case of an insufficient baking, perform additional baking if necessary.”

Panasonic engineers’ decision to knee-cap the oven’s use as a second oven is unfortunate, as this made an excellent product, much less so. A Panasonic spokesperson was unable to provide any clarity on why this design choice was made.

[Editor's Note 12/11/19: After more time using the oven, we've found issues with the Panasonic's baking feature. Unevenness in heat distribution (too much on the bottom, not enough on the top) consistently caused burned bottoms on our cookies. You can compensate for this by using the Roast setting instead of Bake to deliver more heat to the top, but an oven shouldn't require this level of trial and error. We're deducting a half-star from our rating as a result.]

The Panasonic controls look suspiciously Breville-like, which isn’t a bad thing. Hit the Power button, select the cooking mode (Toast, Bagel, Pizza, Roast, Bake, Broil and Keep Warm), make any adjustments to the preset temperature and time, if desired, and hit the Start button. It’s all pretty straightforward. Unfortunately, if you do customize the settings, they are lost each time the oven is turned off. So, if you like your toast dark, you’ll need to change it back to dark every morning.

The display is bright and viewable from all angles. There is no clock on the display, as on the Breville, so you’ll have to rely on the clock on your microwave, stove, smartphone and wrist to know what time it is. 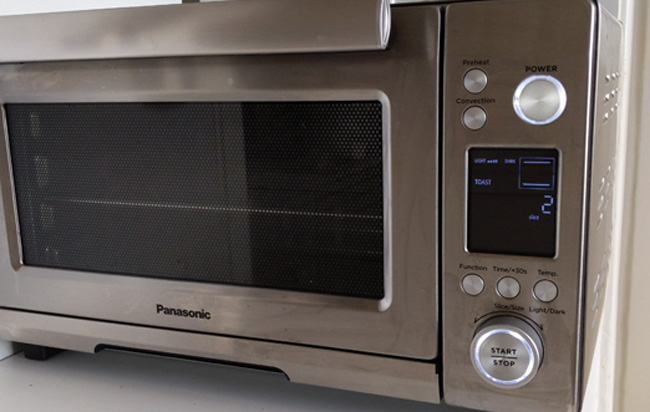 With their small door openings, searing heating elements and hot metal surfaces, both inside and out, I consider toaster oven safety be an important consideration. This is especially true for families, where children use the toaster oven frequently to make toast and reheat pizza.

More expensive ovens like the Breville and Cuisinart have catches on the doors (magnetic for the Breville and a hook for the Cuisinart) to automatically pull out the cooking rack so you don’t need to reach inside the oven to grab your hot trays. Each also has a safety catch on the main rack level to prevent the rack from sliding out all the way. The Panasonic does not. It comes with a wiry hook thing that you’re supposed to use to pull out the tray. Realistically, though, having another doodad sitting on your countertop is not very practical, leaving most people (like me) to reach in with a towel or oven mitt, which can then get burned on the infrared heaters. The product managers should have sent this idea back to the engineers for a do-over.

The Panasonic doesn’t have an interior light, though I don’t see this as an important consideration.

The Panasonic NB-W250 is sold exclusively through Walmart. Overall, reviews are strong with an average rating of 4.1 out of 5 stars across 89 reviews (at the time of this writing). Most complaints deal with bottom toasting effectiveness (see above), with a few complaints about temperature inaccuracy (NOTE: toaster ovens, like most ovens, maintain your set temperature through a cycle of overheating, letting the temperature cool below your set temp, then overheating again. So, depending when you take your temperature measurements, you may find it higher or lower than what you expect).

The Panasonic High Speed Toaster Oven is a very good oven, with some notable flaws. It has a sleek stainless design, lots of interior capacity, yet takes up less counterspace than its high-end competitors. Its cooking performance was very good and, at only $80 on Walmart, this would be right up there with the far more expensive Cuisinart Chef’s Convection Toaster Oven as our Top Pick, if only Panasonic had gotten the convection piece right…

That said, the Panasonic High Speed is still a heck of a bargain at $80 and is my recommendation for anyone who wants a more-than-solid full-sized toaster oven at a very reasonable price.