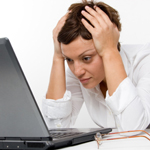 In many ways, Facebook is the water cooler of the Internet age. We all gather around our computers to chat about the news of the day, share pictures of the kids or just talk about what was on television last night. But if you make a social snafu around the water cooler, it's probably only witnessed by a few people—and it's quickly forgotten. But social blunders on Facebook have a much wider audience, which can make them more difficult to recover from.

We've identified the most common sharing missteps, most of which you've probably seen in your own news feed—or even made yourself. Fortunately, your Facebook friends are (hopefully) forgiving, and with a bit of foresight, you can dodge any social snafus in the future.

This can actually be one of two problems. The first being, if you wouldn't say it loud and proud in front of your extended family at the Thanksgiving table, don't post it for all to see on Facebook. Facebook's messaging system can be used to send a private message. There's also email, texting and a good old-fashioned phone call if you need to keep your communication private. If you are shamelessly opinionated in your every day life, well, your Facebook friends are probably already used to this kind of behavior, but for the rest of us, think carefully about making private details public, even to the closed circle of your Facebook friends.

The second problem is accidentally making a post that you meant to only go to a few friends but instead goes out to everyone or posting publicly what you meant to send in a private message. It is an all too easy mistake to make—especially when Facebook's privacy settings aren't always obvious. Fortunately, you can delete any post you make. Just hover over the upper right corner of the message and you'll see a pencil icon. Click on it, then click the delete option in the drop down menu that appears. Then hope you got rid of it before your friends saw it.

Facebook makes it tremendously easy to tag people in photos and updates. And a new "feature" prompts you to tag photos showing up in your newsfeed with a suggestion of who Facebook thinks is in the image! It can be a great way to keep your friends in the loop on what you're up to or what you're doing together, but posting unflattering photos and tagging your friends in it can be a problem, mostly for your friendships.

Not everyone wants photos of themselves posted online and practically no one wants uncomplimentary photos posted, much less being tagged and linked to their Facebook profile. Fortunately, even if you have friends who overzealously tag content, you can remove the tags yourself. However, the pictures are still there unless you ask your friend to remove them.

To remove a tag of yourself that someone has made on a photo, hover over the upper right hand corner of the update, click on the pencil icon that appears, then choose "Report/Remove Tag" from the drop down menu that appears. You can also manage who can see posts you've been tagged in on our timeline and choose to review tags people add to your own posts before the tags appear on Facebook by going to "Settings" >> "Privacy Settings >> "Timeline and Tagging."

No one likes spam in any medium, but to the person doing the posting, it might seem more like sharing something they love instead of spamming. And that makes this problem all too common: everyone on Facebook has at least one friend who's always posting repetitive, uninteresting content. And this goes hand-in-hand with oversharing.

So how do you avoid doing this yourself? Always think before you post and definitely avoid posting the same (or very similar) content over and over again. If you absolutely have to post something that's a bit repetitive or uninteresting, be sure to skip tagging friends in these posts, which flags them for their attention—unless you're positive they'll be fascinated.

If your Facebook friends won't stop spamming your newsfeed with their repetitive messages, you can always change what you see from them rather than unfriending them altogether. Move your mouse over to the upper right corner of any obnoxious update, click on the downward arrow that appears and choose "Hide" from the menu that drops down. The message will be removed and you'll see a new option in its place titled "Change what updates you get from [this friend.]" Mouse over that and you'll see a list of options. For the kinds of updates you want to see from a spammy person, we recommend choosing "Only important." Facebook uses its own judgment to determine what is an important update, but it may be preferable to enduring daily doses of nonsense.

4. Arguing with friends about hot button issues like politics or religion

If you want to keep your friends as friends, you need to tread carefully when you talk about hot button topics. It's frustrating when your friends post political diatribes—and you get shouted down for disagreeing with them.

Of course, this doesn't mean you can't post about politics, religion or other potentially sensitive subjects that matter to you. Just remember that your friends may not all agree with you—and that's no reason to be rude or obnoxious with them. Doing so is a great way to lose friends, both on Facebook and in real life.

If your friends are doing this, check out how to limit the kinds of updates you see from them at the end of section 3 above.

Sure, everyone uses abbreviated language popular in texting and everyone makes the occasional typo. But no one likes wading through posts that have so many typos and abbreviations that they may as well be written in a foreign language. If you have something important enough to say that you want to share it with all of your Facebook friends, it's worth making the effort to write it out clearly—anything else is just going to cause friends frustration.

If you make a glaring mistake in a Facebook post, there isn't any ability to edit the text. However, you can edit any comment you make on someone else's post as well as anything you've written attached to a photo. For editing a comment, simply mouse over the upper right corner of your comment box to see a pencil icon. Click on it and then on "Edit" on the drop down menu that appears.

For photos, click on the image so the picture fills most of your screen with your post and the comments displayed to the right of it. You'll see an "Edit" button below your update, but above the comments. Click it to change your message, the date taken, who is tagged in the message or location it was taken.

Of course, none of us are perfect and we all make social snafus now and again. But if you want to be top of the class in Facebook etiquette be careful not to make these mistakes yourself!

don't forget not to put

nice thoughts. Better if we

Better if we just go through the feeds and only pick up those that are relevantly informative and useful.

There is some helpful info here. Thank you.
How ever.
I disagree with this statement “If you make a glaring mistake in a Facebook post, there isn’t any ability to edit the text.” This is true in mobile browsing and possibly some versions of the app, but not the full Web version. I have edited old top level posts.

Next, may I suggest a reconsideration of the acronym “snafu”?  You say “social snafu” when I believe you are describing a blunder. The first two letters in “snafu” represent “situation normal” this is at odds with your etiquette suggestions.

Thank you again for your efforts to share. I enjoy reading your blog.

The last three letters matter too...

I totally agree. I

I totally agree.  I have more ‘friends’ that air their dirty laundry on Facebook that it takes the whole joy of it all away.  Check out my blog regarding some similar Facebook issues.  http://www.thewackywayoflife.com