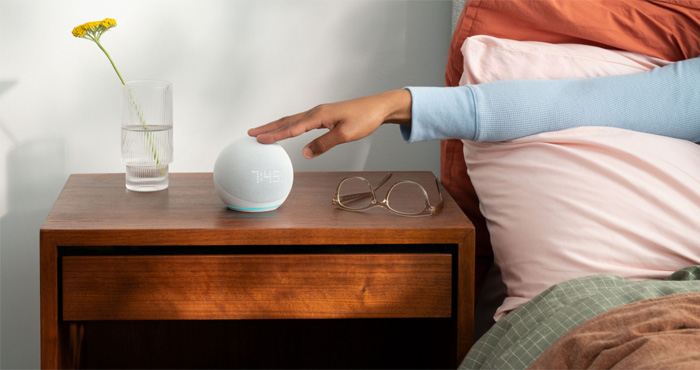 eero’s mesh WiFi system communicates between devices placed throughout the home rather than having the router manage the internet traffic for each extender. This approach delivers better WiFi speeds than systems that aren’t mesh WiFi. One eero router ($69.99) covers about 1500 square feet with speeds up to 550 Mpbs, and a 3-pack (one router and two extenders) ($199.99) covers a 4,500-square-foot home.

Adding an eero Built-in Echo device to a back bedroom or an upstairs guest room adds up to 1,000 square feet of coverage to your existing eero network. Amazon says it will support speeds up to 100 Mbps, which is fast enough to make video calls or play online games without buffering or losing connectivity. However, it won’t be as fast as a stand-alone eero Beacon WiFi extender ($99), which reaches speeds of up to 350 Mbps. The Echo devices will work with all eero systems except eero Home WiFi System (1st gen).

The 5th gen Echo Dot and Echo Dot with Clock get more than eero Built-in. They have redesigned audio features with twice as much bass and clearer vocals than previous generations. The Clock also has new sensors that enable tap gestures, and the LED lights will now display information like song titles and the weather.

If you use an eero mesh WiFi router system in your home and want to get better WiFi, adding a new smart speaker that does double duty is an easy decision. We have our fingers crossed that Amazon will bring the eero Built-in feature to even more devices in the future.

The eero Built-in all-new Echo Dot and Echo Dot with Clock are available for pre-order on Amazon now, and the software update will be available on October 20th.