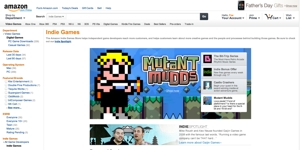 Some of my personal favorite games as of late have come from independent game developers. There’s no secret behind these games’ success: They’re written and programmed by talented, dedicated teams – sometimes no more than just 2 or 3 people – who are willing and capable of taking risks that mass-market developers won’t. They’re the art house cinema of the gaming world, and they’re only growing in popularity.

Today, they’ve gone mainstream: Amazon.com has just launched a new Indie Games marketplace to help spotlight – and of course, sell – some of the most impressive indie games on the market today.

If you’re not familiar with indie gaming, Amazon’s jump into the pool could be the right time for you to follow suit. The company is offering some terrific introductory deals, bundles, free games, and a constantly changing selection. Amazon will also be featuring Q&As with game developers, giving you a deeper look into this hobby-turned-industry.