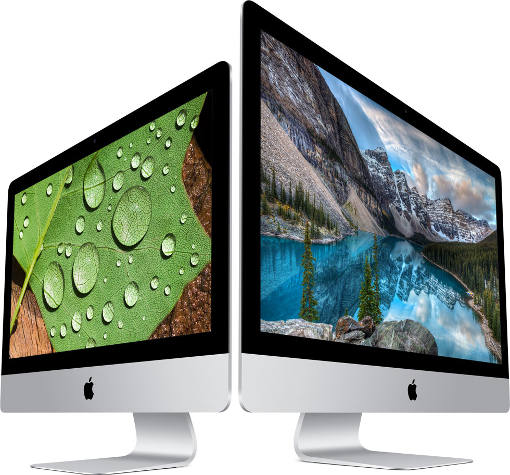 Displays on Apple’s iMac computers have get an update, as the company makes a Retina 4K ultrahigh definition display available for the 21.5-inch iMac and sets a Retina 5K HD screen as the default for the 27-inch iMac.

The new Retina 4K display offers a screen resolution is 4096 x 2304 pixels — that’s about 9.4 million pixels on your iMac’s screen. With the iPhone 6s’s ability to capture 4K videos, the arrival of Retina 4K on the 21.5-inch iMac lets you use your computer to watch and edit them in their full 4K glory.

The 21.5-inch iMac also has a newer and faster processor inside, a fifth-generation 3.1-gigahertz quad-core Intel i5 chip. Add more power by opting for the 3.3-gigahertz quad-core Intel Core i7 for another $200. Base RAM on the 21.5-inch iMac remains at 8GB; you can upgrade to 16GB for $200. The system uses the same Intel Iris Pro Graphics 6200 processor as earlier models.

The 27-inch iMac gets an AMD Radeon R9 graphics card to support its Retina 5K display, offering seven times more pixels than a standard HD display. Instead of the fifth-generation processor in the 21.5-inch iMac, the 27-inch iMac will use a sixth-generation Intel Skylake chipset.

The new iMac models come with a smaller, more compact wireless Magic Keyboard that takes up 13 percent less space on your desk. It's now powered by a built-in, rechargeable lithium-ion battery pack rather than two AA disposable batteries. According to Apple, the new keyboard charges in only two hours with enough power to last a month.

As expected, the 4K model costs more at $1,500, about $200 more than the older 1080p Full HD model, which is still available. The 27-inch iMac costs $1,800. Both new iMac models are now available on the Apple web store, brick-and-mortar Apple Stores and some reseller outlets.