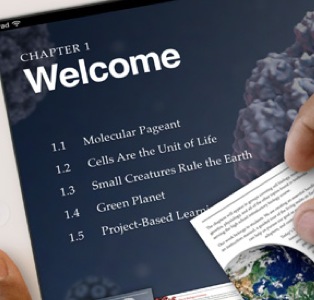 Students used to give teachers apples, now Apple wants to give something to all students, an IPad. In an event in New York City yesterday, Apple announced new software that they hope will change learning, teaching and the business of educational publishing.

Central to Apple’s presentation was a big update to their iBooks app. They also introduced two new apps that aim to change the way textbooks are created and used. One, iBook Author, will allow textbook writers and publishers create content that is optimized for the iPad. Another, iBooks 2, updates Apple’s iBooks app with new study and note-taking features. Lastly, the presentation included apps for teachers for iPhone and iTunes U.

Textbooks on the iPad, Apple hopes, will replace the physical textbook, which Philip W. Schiller, Apple’s senior vice president of marketing labeled as too heavy, expensive, not portable, not durable, and not interactive. Though modern textbooks have "great content," according to Schiller, they are "clearly not the ideal learning tool anymore."

iBooks 2 comes with the ability to highlight important passages, view 3D models, videos and images, make flashcards, look up words in the dictionary within the application, search through the book and more. The application is free to download in the iTunes store

With iBooks 2, the first textbooks would be available immediately for $15. The high school texts will initially come from publishing partners Pearson, McGraw-Hill and Houghton Mifflin.

Apple also introduced iBooks Author, a content creation platform for authors of both textbooks and other works. At the event, Apple focused on textbook authoring, displaying a What-You-See-Is-What-You-Get application for Mac computers that enables writers and publishers to create content-rich books in an application similar to the company's Notes and iWork apps. That app is also free and will be available in the iTunes store.

Besides the textbook-focused apps, Apple also revealed iPhone and iPad app for iTunes U, which will allow teachers to create syllabi, share videos of their lectures, and publish class notes for their students.

Implicit in the release of all these new tools for education, is the need for schools themselves to get iPads into students’ hands. Though many school districts have begun outfitting students with tablets – both Apple and Android devices – the cost of bringing iPads to all students will prove prohibitive, to say the least. In short, full scale adoption of Apple’s admirable vision will take many years.

The new Apple tools look fantastic.  As always, Apple has taken a concept like etextbooks and set it on its ear.  These professionally prepared textbook are fantastic and Apple has the market presence to force a rational pricing structure.  The new authoring tools will make it easy for more people to create textbooks.  This could be a mixed bag, as many of these new texts will not have the same production values as the examples.  We could also find ourselves deluged with “textbooks” on topics such as “Intelligent Design” and the “Climate Change Fraud” or even “The New World Order”
And will Apple being calling the shots on which texts make the grade and which don’t?  Will they be better or worse that the Texas State Textbook Committee?

But my largest concern is that these wonderful tools come with a total commitment to the Apple Walled Garden.  No stretching your budget by buying anything other than Apple, no Kindles, no WinTel netbooks, etc.  About half my student already bring computers to school.  Of those only about half use Apple.  If Apple is dedicated to improving education and textbooks as they claim, then apps for Windows, Android, etc should be allowed.  Not only do I doubt that Apple will create them, I’m willing to bet that they will work hard to prevent them (lawsuits, etc)

BTW are all iTunes songs still $1.00?  I fear that if there is widespread adoption of these Apple based textbooks, the publishers will jackup the prices.  And while $15 per student does sound quite low, it really about the same cost as paper textbooks amortized over the 5-7 years that a text is typically used.  The publishers have already tried increasing their margins on current e-texts

Will Apple be able to enforce their “You own it forever’?  I really hope that they can, I think the publishers will be looking at that as a place to rollback.

If there is a facet of the textbook industry that Could really be revolutionized, it would be the COLLEGE textbook market.  Sell e-text books at $15 and you will be the source of choice for students.  Heck even double or triple that and still be the market leader, especially if you can keep your books.

As a potential author, i would be VERY concerned about Apples policies about Apple being the only distribution channel.  They have basically created a situation in which you surrender all rights to Apple.