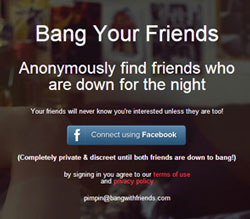 You may want to avert your eyes if the use of vulgar language makes your cringe, because the Facebook app we're going to talk about doesn't even put on a show at being marginally classy. Bang With Friends, which very much sounds like an X-rated version of Words with Friends, does just what its name implies. Once you've installed it on your Facebook account, it connects you with your friends—of the opposite sex as a default—who are interested in a casual hook-up with you, even those whose relationship status very much indicates they're not single.

Choosing a friend you are "down to bang" with will not notify them that you're interested unless they chose you as well (though when you first install the app, it shows you at least one friend who has also installed it, so it's not quite as discreet as its website claims). Also, there seems to be no way to "un-bang" someone once chosen. When a match is made, you each get an email letting you know about the mutual desire.

A gender option changes the app's default filter from opposite sex to same sex. The app can supposedly filter out relatives, but if you don't categorize who among your friends are family you'll find it pretty creepy browsing through your list of potential hook-ups.

From the time it was launched in late January, the app has gained such a tremendous following (hundreds of thousands of users, with more joining at the rate of five per minute) that it has spawned not just a lot of controversy, but also a copycat app for LinkedIn called—you guessed it —"Bang With Professionals."

The app wasn't developed by some big-shot company in the adult industry, though—it was designed by three college students, as evidenced by the app's official email address: pimpin@bangwithfriends.com. While they decided to remain anonymous, the developers have reportedly released other apps prior to this. According to The Daily Beast, Bang With Friends was created within two hours, under the influence of Red Bull and vodka. And (we're guessing here), without members of the opposite sex actually present. We are left wondering when the simple act of asking a Facebook friend out via Chat or Private Message became so passé that they felt such an app was needed.

According to one of the developers: "One night, we were shooting the shit about how online dating is broken. What a lot of people want is just to skip all the shit and get to the sex." While they think the dalliances could eventually lead to romance, it's clearly not the prime motivation for those who are "down to bang" (their words, not ours).