Beyond LCD: Which New 4K UHD TV Technology Is Best? 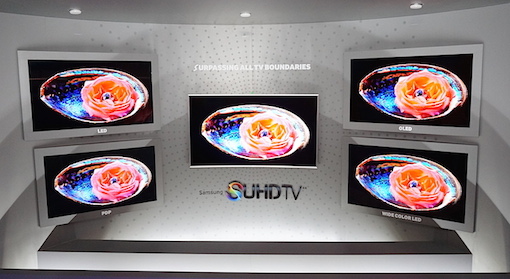 Apparently, HDTV is so last decade. Here in Las Vegas at CES, not only are all the major TV makers showing off (almost) nothing but 4K ultra-high-definition (UHD) TVs, but many have juiced up their LCD LED sets with technologies that make them more than plain old LCD 4K UHD. Leading this more-than-LCD charge is LG, the only company actively promoting OLED (organic light-emitting diode) 4K UHD.

OLED technology is a radically different display approach from LCD. LCD technology requires a backlight to illuminate the crystal panel, much the same way you have to shine a light through a 35mm photo slide to see the image. But this backlight indiscriminately adds illumination to every pixel, whether that light is needed or not. As a result, even those areas of the image meant to be absolutely black are often dark gray instead, and colors are often bleached.Each pixel on an OLED display, however, is self-illuminated and processor-controllable. When that pixel needs to be absolute black, it is just turned off — pure black. This makes colors jump off ridiculously thin (4mm) OLED displays like an orange tiger painted on black velvet.

LG bought the foundational OLED patents from its inventor, Kodak, staking their claim on the OLED technology. At CES, LG has unveiled seven new 4K OLED TVs, including flexible, curved and flat models in 55- , 65- and 77-inch screen sizes. Pricing wasn't announced — but they won't come cheap.

To counter the black and color display advantages of OLED over standard LCD with LED backlighting technology (often incorrectly called simply "LED"), some UHD TV makers (including LG) have adopted a technology known as quantum dot, which some companies are calling nanopixels or nanocrystals.

Quantum dot is a LCD backlighting assist technology. According to LG, quantum dot works by harnessing nanocrystals ranging from 2 to 10 nanometers. Each dot emits a different color, depending on its size. Quantum dot technology uses a film of quantum dots in front of the LCD backlight, boosting picture color reproduction rate and overall brightness. In other words, quantum dot compensates for the color bleaching caused by bright, indiscriminate LED backlighting that shines through the LCD panel.

Samsung's SUHD line displays what it describes as "color better than OLED." (The “S” doesn't stand for anything specific; Samsung says it stands for “super” and “superior” and other “s-” superlatives, as well as being a reference to its Galaxy S smartphones and tablets.) At CES, Samsung unveiled three series of SUHDs in nine screen sizes from 48 to 88 inches. Prices will be announced when the sets are closer to their spring availability.

Sony is now using a different technology in its Triluminous Bravia UHDs. But QD Vision is supplying the quantum dot technology to new sets unveiled by TCL, including the 55-inch H9700, which the QD Vision folks say achieves better color than any UHD on the market — including, it says, OLED. No word on when this TCL set will be available in the United States, though.

There are actually two ways of applying quantum dot technology. Both Samsung and LG use a film solution, a layer applied in front of the LCD panel. On the TCL UHD sets to come, QD Vision is using an edge array technique it says is not only cheaper to manufacture but produces deeper color saturation.

Quantum dot isn't the only color-boosting LCD technology on display at CES this week. Both Philips and Sharp are using proprietary technologies to achieve a wider color gamut and deeper blacks. And both LG and Samsung will be selling more entry-level “wide color” UHDs that use a layer of glowing phosphors that LG says will boost the color range 25 percent.

Going down a different path altogether, Philips is heralding its slightly redundant Smart Laser Backlight Ultra UHD, which will be available in two sizes (65 inches, 65PFL8900/F7, $3,500; and 55 inches, 55PFL8900/F7, $2,500) in late spring. Philips claims that because quantum dot film is laid over the LCD panel, it’s not as easy to adjust to the scene being displayed. Instead, Philips is using a high-contrast, glossy filter that uses an array of edge-mounted red lasers and cyan (blue) LED, full-array local dimming (FALD) backlighting with 16 zones. This helps widen the color gamut and create deeper reds to better boost and adjust the color and illumination.

Sharp's strategy for going beyond 4K is its Quattron AQUOS Beyond 4K Ultra HD TV series is to multiply the number of pixels. Instead of single pixels that each create all three primary colors, each pixel in Sharp's Beyond 4K UHDs have individual sub-pixels for red, green, blue and yellow. This creates 66 million subpixels, more than twice the number of sub-pixels in the company's 2014 UHDs and 42 million more regular pixels than standard 4K UHD (even if comparing pixels to sub-pixels is a bit of an apples-to-apple-slices sort of thing).

Combined with FALD backlighting, Sharp claims its Aquos Quattron Beyond 4K UHDs provide 167 percent greater resolution than traditional 4K UHD and begins to approach 8K with what it calls "the best viewing experience commercially available in 2015."

Which technology is best?

Given the harsh glare of the CES show floor (not to mention the mob crowding in to take a closer look) and the lack of consistent content shown on each set, it's impossible to make any A-to-B comparisons of quality.

At the Samsung booth, Samsung has surrounded its quantum dot UHD with four other TV technologies: one of its standard LCD LED sets, a plasma set, an OLED prototype TV and its "wide color" LED TV. The OLED in this side-by-side setup had its brightness turned down, increasing the difficulty of comparison.

LG displayed its OLED and quantum dot UHDs at adjacent displays, so it was easier to move back and forth to look at each. Since LG has an interest in both OLED and quantum dot technologies, we can assume sets in both displays were set for optimal performance and to help viewers draw comparative conclusions.

The truth is, both OLED and quantum dot technologies have their pros and cons. With no backlighting, OLED sets have deeper blacks than quantum dot, which still uses indiscriminate backlighting for illumination. But like plasma sets, OLED is an emissive technology — the technical way of saying it creates its own illumination. This means OLED sets also could be subject to image retention, aka burn-in — the ghostly outlines of static graphics such as channel bugs or news sidebars that are a permanent part of a station's or program's presentation.According to LG, its OLEDs include an auto-brightness limiter. If no pixel movement is detected over a give period of time, the set automatically starts stepping down the screen brightness to minimize the potential for image retention. Also, once the set is turned off, a kind of pixel scrambler is activated that pushes pixels back to neutral.

In my own view, quantum dot's color expansion can actually appear overwhelmingly saturated. Reds, blues and yellows look too deep, especially the reds, appearing almost unnatural. And wide color could create even greater color disparities than you probably already see when you change channels.

Color adjustment could minimize what I perceived as oversaturation on the quantum dot UHDs I saw on the show floor, which could have been set unnaturally high to compensate for the bright show floor lighting, but the colors on LG's OLEDs looked more natural.

Which technology will take the lead?

Regardless of the technology used, all the "beyond LCD" sets I saw at CES from the aforementioned TV makers looked far superior to last year's plain old LCD LED 4K UHDs. But if the pros and cons of OLED and quantum dot cancel each other out, you're left with price.

QD Vision told me the TCL 55-inch UHD model equipped with its edge array technology is currently on sale in China at $2,400 and is unlikely to be priced higher in the United States. Since quantum dot is merely an extension of the common LCD LED technology, it will likely be far cheaper than LG's 4K OLED sets, perhaps by a factor of more than two to one. Given that price differential, quantum dot 4K UHDs start to look even better.

help an old guy out

Moving to a condo - want to cut the cord on cable - which movie/series streaming system is best - amazon fire - roku - what???  Thanks in advance for your help with this.

My worst answer: It depends

The truth is that Roku, Amazon Fire TV and Apple TV are all excellent in their own ways. Amazon is the cheapest, has a very clean interface, and the voice function on the remote makes searching for movies much easier. But it has few streaming options compared to the dozes on Roku. But if you’re fine with Netflix and Amazon, it will work well for you.

Roku has by far the most streaming choices and we love the headphone jack on the Roku 3 remote, so you don’t disturb others while watching TV. So for a true cable replacement, Roku probably comes the closest.

If you’re an iTunes user, then Apple TV is the only option. It will also stream Netflix and many other channels, but not Amazon (so if you get free movies through Prime, you’ll be out of luck).

To get local channels, you may find you need an external HDTV antenna. Our pick was the Mohu Leaf: https://www.techlicious.com/review/the-best-indoor-hdtv-antenna/.

This article is worthy of recognition and comment. I found this material attention-grabbing and engrossing. This is well-scripted and highly informative. These views appeal to me. This is how real writing is done. Thank you.