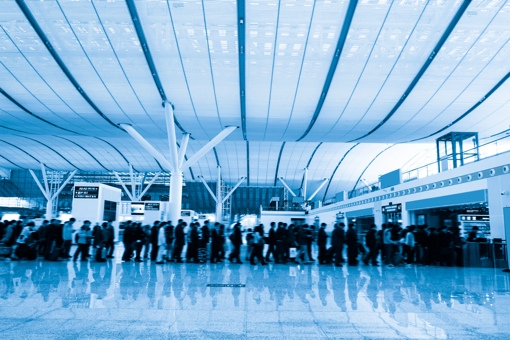 The system, known as BlipTrack, works by tracking the unique Media Access Control (MAC) addresses of phones and other devices actively searching for a WiFi or Bluetooth connection in the airport. The location of your phone will only be tracked as it moves through certain pre-defined areas, and no personally identifying data will be collected. Airport officials claim the system poses no threat to your privacy.

The nuts and bolts behind BlipTrack are virtually identical to the customer-tracking system tested by retailer Nordstrom early last year.

The choice to move forward with the BlipTrack system is curious, given that Apple is removing the ability for MAC addresses to be tracked in iOS 8. Should Google’s Android OS follow suit, Cincinnati’s system could be obsolete just months after it’s installed.

BlipTrack, already in use in major international airports worldwide, is expected to go live in Cincinnati next month.

BlipTrack works by detecting Bluetooth and Wi-Fi devices in the proximity of a BlipTrack sensor. A device can be a mobile phone,tablet, IVI system, laptop and more. Each device has a unique MAC address which is assigned to the device during manufacturing and cannot be modified.MAC addresses do NOT link to any individual user data, thus personal information is not revealed.When a BlipTrack sensor detects a device, it generates a one way hash code using a SHA-256 algorithm. Only part of the hash code is transmitted, making it impossible to revert hash codes back to real MAC addresses. Communications between the sensor and the server are encrypted using SSL.BlipTrack supports re-hashing of MAC address device hashes, in compliance with the EU directive about privacy (WP 185 chapter 5.5). By changing the secondary hash code on a daily basis, it is impossible to identify specific devices, keeping travel patterns private.