Does Laptop Wi-Fi Nuke Your Sperm? 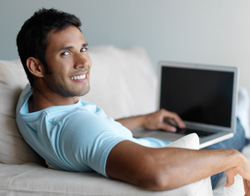 A new study, published in the scientific journal Fertility and Sterility, suggests that laptops connected to Wi-Fi may damage men's sperm.

That's not good news for men who are looking to conceive. However, experts caution men not to get too worked up over this latest results, since conditions of sperm outside the body (as in this study) differ significantly from how sperm is normally protected inside a man's body.

According to the BBC, UK fertility expert Dr Allan Pacey, senior lecturer in andrology at the University of Sheffield, said: "Ejaculated sperm are particularly sensitive to many factors because outside the body they don't have the protection of the other cells, tissues and fluids of the body in which they are stored before ejaculation. Therefore, we cannot infer from this study that because a man might use a laptop with Wi-Fi on his lap for more than four hours then his sperm will necessarily be damaged and he will be less fertile."

And Dr. Robert Oates, the president of the Society for Male Reproduction and Urology, tells Reuters Health he doesn't believe laptops are a significant threat to male reproductive health.

"This is not real-life biology, this is a completely artificial setting," he said about the new study. "It is scientifically interesting, but to me it doesn't have any human biological relevance."

It's also important to note that early concerns over the health effects of electromagnetic radiation, such as cancer risk from cell phones, have been largely disproven in later studies.

Beyond the potential Wi-Fi risks, though, studies have shown that the heat alone from laptops, when held on your lap, can contribute to sperm damage. So it's safe to say that men who are looking to father more children had best keep their laptop on their desk top.

Could some of the problem be that most people site with a laptop on their laps when working on it? Maybe a laptop table could help, I just got a Lapeez to use when I’m working form home or traveling. Here’s the product if you’re interested http://bit.ly/vy3hNS. I’m just glad I’m a female so I don’t have to deal with this sort of thing haha

How do you know? it could cook your baby, haha!

Consider it a cheap and painless way to get a vasectomy,
Keeping a Laptop on your lap was never the recommended way to use it.
Now you know it’s not good for you and it’s also not good for the Laptop. Not enough air circulation when it rests on your lap which can lead to overheating and will lead to a shorter life span for both of you.

Do we really need to

Do we really need to know that one more useless study was conducted?