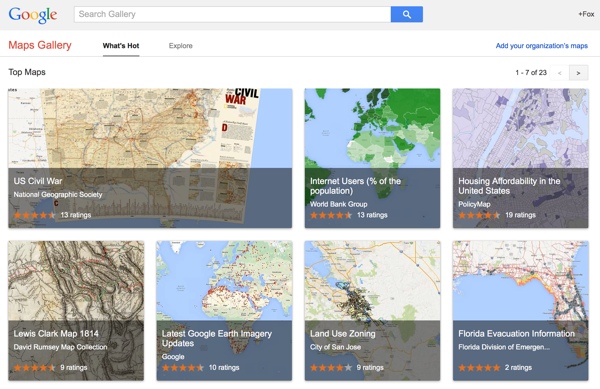 Google today announced the launch of its new Google Maps Gallery, an effort to take interesting historical maps, data overlays and other unique views of our world and make them explorable through the Google Maps interface.

“Maps Gallery works like an interactive, digital atlas where anyone can search for and find rich, compelling maps,” Google explains on its Official Enterprise Blog. “Maps included in the Gallery can be viewed in Google Earth and are discoverable through major search engines, making it seamless for citizens and stakeholders to access diverse mapping data, such as locations of municipal construction projects, historic city plans, population statistics, deforestation changes and up-to-date emergency evacuation routes.”

There are a lot of cool maps to explore on a wide range of topics. Currently popular maps include NASA imagery of the Earth at Night, a map of housing affordability in the United States, and a map from National Geographic detailing the key battles and locales of the Civil War. It's a lot of fun, especially if you're a map geek like me.

Google Maps Gallery is only the latest public interest mapping project to be offered by the Internet advertising giant. In the last few years, Google has provided virtual access to real-world museums, shared a haunting post-tsunami tour of Japan, and even mapped the planet of Mars.

You can access the new Google Maps Gallery by visiting maps.google.com/gallery.