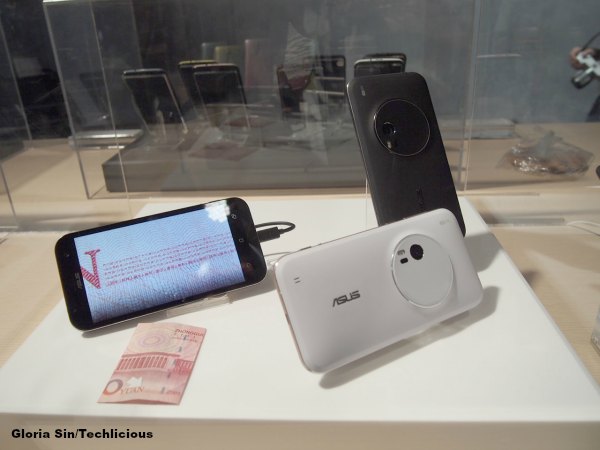 Asus is all about the camera with its newest lineup of premium smartphones, as revealed by chairman Jonney Shih at the 2015 Consumer Electronics Show. The new flagship ZenFone 2 features a 13-megapixel PixelMaster camera that allows particularly good control of HDR backlighting, and the Zoom offers 3X optical zoom and the manual controls that serious photographers love.

Unfortunately, we only got to play with the ZenFone 2 at the press conference, because the Zoom was behind display glass. Here are our first impressions of both devices.

If you've always wanted a serious camera on your smartphone but were reluctant to try a Windows Phone like the Nokia Lumia 1020 with its 41-megapixel camera, the Asus ZenFone Zoom might be just what you've been waiting for. It runs Android 5.0 Lollipop, so current Android users should feel right at home.

The Zoom's circular back cover design is definitely a throwback to the Lumia 1020, but with a much slimmer profile. In fact, this is the world's thinnest smartphone, with a 13-megapixel camera with 3X optical zoom (12X digital zoom), laser auto focus and optical image stabilization.

Its 5.5-inch full HD IPS display has a pixel density of 403ppi, which should allow you to see all the beautiful details in your photos. That said, we couldn't put the technology to the test because the only Zooms available at the event were displayed behind glass, aimed at the fine print of a single bill to show the level of zoom the devices are capable of.

Judging from the display, it seems the Zoom will be available in black and a white version with rose gold edges. Though Asus did not reveal specific carrier or country availability, a representative said the company is working to bring this device to America. We're keeping our fingers crossed that it'll get here by the second quarter for $399, as announced. 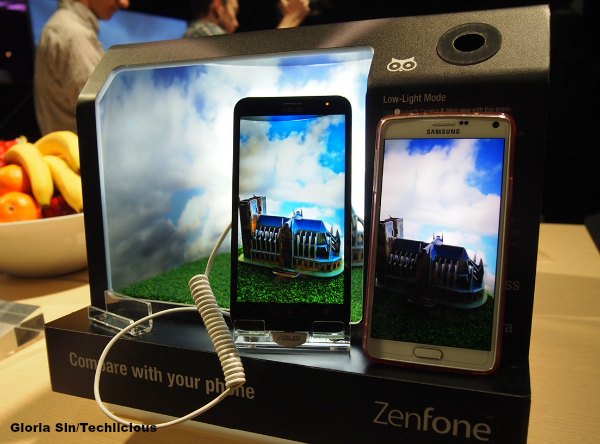 As the flagship Asus smartphone, the ZenFone 2 is packed with lots of cool technologies yet looks anything but geeky.

Powered by the new Intel 2.3GHz, 64-bit Atom processor (Z3580), the ZenFone 2 is the first smartphone to come equipped with 4GB of RAM — as much RAM as in most current computers. Sadly, the U.S. version of the ZenFone 2 that starts at $199 will only have 2GB of RAM.

The ZenFone 2 also has dual SIM slots, making it handy for travel because you can insert a local SIM card to avoid roaming charges while remaining reachable via your existing phone number. With a 5.5-inch full HD IPS screen, it should provide a clear view of selfies and photos taken with the front 5-megapixel camera or the 13-megapixel PixelMaster cam on the back.

The ZenFone 2’s rear cam has a f/2.0 wide-aperture lens with great low-light performance. A press release notes that its pixel-merging technology manages photos that are up to 400% brighter without a flash at night or in low-light scenes. We were able to see the difference between the ZenFone 2 and the Samsung Galaxy Note 4’s capabilities even in Auto mode. When we took the photos of the same objects inside a dimly lit box, we could see more details in the ZenFone2’s images without having used the flash. The Asus smartphone's Backlight (HDR) mode effectively took test photos that were more evenly exposed, especially compared with photos taken with the same mode on the Note 4.

The ZenFone 2 shares the same concentric-circle, brushed metal finish of the Zenbook Ultrabook, but it takes after the LG G3's ergonomically curved case design down to the location of the volume button on the back. The placement of the volume and power button (on top of the device) will probably take some getting used to, but it's not necessarily a deal breaker. Asus showed off the device in a rainbow of colors (including white, black, gold, red and gray), and we hope that U.S. models won't be limited to black and white. That said, we do like the interesting color combinations and textures from the Illusion series of artist-designed cases.

All in all, the ZenFone 2 promises to keep life interesting for photography fans, and we look forward to spending more time with it when it comes to America in March.