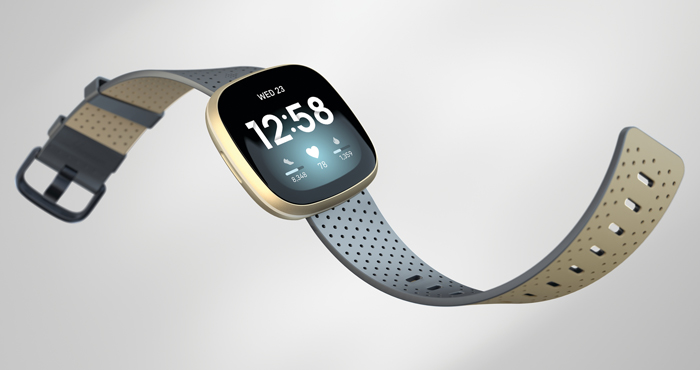 Today, Fitbit introduced the Fitbit Versa 3, the latest generation of its popular Versa smartwatch, with key new features and just a small bump in price. It now has onboard GPS, Google Assistant (it previously had only Alexa), and the ability for Android users to answer calls from their wrist. The best part, it’s just $30 more than the Versa 2 at $229.

The Versa 3 has all the tracking features Fitbit is known for; steps, distance, calories, burned, sleep, and heart rate and adds in Active Zone Minutes, which was first introduced in the Charge 4. This tracks the amount of time you spend in the fat burn, cardio, and peak heart-rate zones, helpful for runners or spinners who want to stay in a certain heart rate range. It also adds the new PurePulse 2.0 optical heart rate sensor technology for 24/7 heart rate tracking.

With the inclusion of onboard GPS, you can leave your phone behind, and the Versa 3 will keep track of location, pace, and distance while you’re exercising. You can then sync the data when you get home. This is a welcome upgrade as other Fitbit devices, like the Charge 4, already had this feature. Keep in mind, using GPS puts more drain on your battery.

The Fitbit Versa 3 gets a new magnetic charger, which will hopefully be easier to use than previous charging cradles that had to be snapped in at just the right spot. Fitbit says you’ll get more than six days of battery life on a single charge and has added fast charging. That way, if you forget to charge up overnight and are headed out for a run, a 12-minute charge will keep you going for a full day.

You now get your choice of voice assistants with the Fitbit Versa 3, as it has support for Google Assistant and Amazon Alexa. This may have something to do with Google’s recent acquisition of Fitbit, but whatever the reason, users now have an option for setting reminders for workouts, checking the weather, or controlling smart home devices.

You can now use the Versa 3 to receive phone calls through the built-in microphone and speaker. This feature, which is usually found on higher-end smartwatches, lets you keep your phone tucked away, which frees you up to be present while socializing and focus when out hiking or exercising. Of course, you do need your phone near you in a bag, pocket, or holder to make this work, as the connection is via Bluetooth, not LTE.

While the Fitbit Versa 3 has an option to store music locally, so you don’t have to carry your phone with you while exercising. Spotify fans will be disappointed to learn this will only work for Pandora and Deezer subscribers. You can, however, control Spotify on your phone with the Versa 3.

The Versa 3 is water-resistant to 50 meters for swimming, has NFC for Fitbit Pay, really useful for contactless purchases, and gives you smartphone notifications you’d expect, such as text messages, emails, calls, and more.

The Versa 3, at $229, is more affordable than smartwatches that work more closely with your smartphone, like the Apple Watch 5 and the Galaxy Watch 3. It will come in 3 colors: black/black aluminum, pink clay/soft gold aluminum, and midnight/soft gold aluminum. The bands on the Versa 3 are interchangeable with options such as leather and woven starting at around $30. The Fitbit Versa 3 is available to pre-order now on Fitbit and will ship in late September.