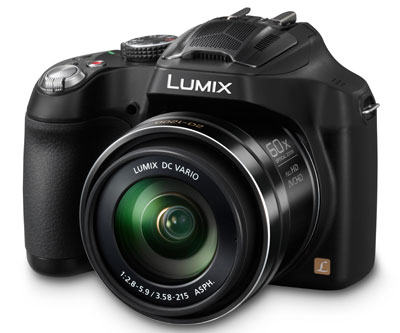 This week, Panasonic announced the Lumix DMC-FZ70, a camera that sports the longest zoom lens available on a point-and-shoot (fixed lens) camera: 60X (up from 50x). The 20mm ultra-wide-angle lens boasts F2.8-5.9 lens  brightness and is backed by a 16.1-megapixel high-sensitivity MOS sensor. So if you want crisp detail—no matter how close or far away you are from your subject—the FZ70 can deliver. For instance, we were able to get closeups of an air conditioning unit on the Empire State Building from 11 blocks away. We could clearly read the brand.

This level of zoom might seem extreme and, technically, it is. The benefit is that you don't have to get close to get a detailed shot. You can be stuck in nosebleed seats at the game and still get closeups of your favorite players or get detail shots of an exhibit that's been roped off.  The megazoom does all the work.

Using a megazoom lens has potential drawbacks. Once you start zeroing in on a specific object, even the smallest movement of your hands can lead to a blurry shot. To mitigate this, the FZ70 includes Power Optical Image Stabilization. Panasonic claims the technology is good enough to make video shot while zoomed-in watchable—even if you walk while filming.

You'll be able to shoot video in full HD (1920 x 1080) in both AVCHD and MP4 formats. And a new Zoom Microphone incorporates Dolby technology and a wind shield, which minimizes wind noise far better than previous Lumix models. You can also snap still pictures while shooting video and maintain control over shutter speed and aperture for the stills.

Compare the Lumix FZ70 to other megazoom cameras on Amazon