Revealed: The Words Apple Doesn't Want You to Type 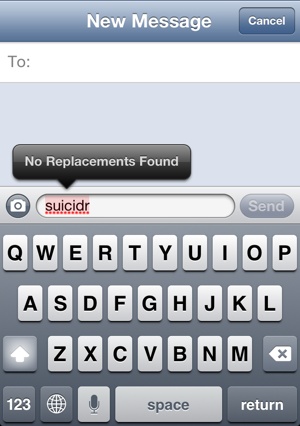 I’ve never really liked Apple’s autocorrect feature. Sometimes it’s totally on the money, changing an absolute garbled mess into readable sentences. And yet it seems to choose the most incorrect word at the least opportune times so often that funny autocorrect errors have become an Internet meme.

As it turns out, some of these errors aren’t our fault – they’re a result of a sort of modern-day censorship. According to an analysis of the iPhone’s word library by The Daily Beast, there are more than 14,000 words that your device simply won’t suggest as a correction.

The bulk of the missing words (like “sempstress” and “nephrotoxin”) are too obscure to come up in regular daily use; others are omitted because they’re recognized as curse words. But plenty of common words are missing from the correction dictionary presumably because they deal with sensitive topics. “Abortion,” “marijuana,” “murder,” “rape” and “suicide” are all on the so-called Apple kill list.

Presumably, Apple is omitting these words so your phone won’t accidentally autocorrect potentially offensive words into your texts. But as the Huffington Post points out, many victims of domestic violence will text 911 when it’s not safe to call. Fighting with autocorrect is the last thing a person in that kind of situation needs to deal with. And what happens if someone’s plea for help is ignored because a phone refuses to understand the insensitive word “suicide?”

If you’d like to know more about which words are found on the Apple kill list and how the analysis was performed, check out The Daily Beast’s article. It’s a terrific read.

It’s unfortunate when corporations start editing what is essentially a dictionary out of perceived political correctness.