Facebook Pressured to Take Action on Violence Against Women 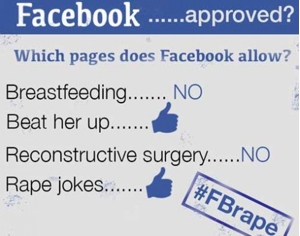 Without a doubt, misogyny and anti-women hate speech exists on the Internet in spades. Part of the problem, of course, is anonymity; another part is inaction on the part of social networks like Facebook to police such content. But a recent open letter from Women, Action & the Media on the topic has elicited a response from Facebook that includes a promise to work harder to make the Internet a safe space for all.

Specifically, the open letter targets gender-based hate speech, much of which is tied in with threats and jokes about rape. According to the group, Facebook is overflowing with violent and offensive content targeting women. Specifically, the letter citing groups with names like “Raping your Girlfriend” and photographs of abused women with captions intended to elicit laughs.

“These pages and images are approved by your moderators, while you regularly remove content such as pictures of women breastfeeding, women post-mastectomy and artistic representations of women’s bodies,” reads then open letter, signed by numerous women’s groups from around the world. “It appears that Facebook considers violence against women to be less offensive than non-violent images of women’s bodies, and that the only acceptable representation of women’s nudity are those in which women appear as sex objects or the victims of abuse. Your common practice of allowing this content by appending a [humor] disclaimer to said content literally treats violence targeting women as a joke.”

In a statement, Facebook states it does its best to serve as a forum for free speech while still protecting its users from harassment, bullying, and threats of violence. The site still apologized, however, “In recent days, it has become clear that our systems to identify and remove hate speech have failed to work as effectively as we would like, particularly around issues of gender-based hate. In some cases, content is not being removed as quickly as we want.”

As part of it’s promise, Facebook will work with women’s groups to review the company’s guidelines for offensive content, institute improved training for the site’s moderators, and increase accountability for those who post vulgar content. A new policy requires potentially offensive speech to be posted with the author’s full name, opening the author up to public shaming.

According to Women, Action & the Media, supporters sent over 60,000 tweets and 5,000 emails to both Facebook and their advertisers. The group will continue to target companies such as Dove, American Express, and Zipcar that continue to place Facebook ads next to offensive content.