Roku to be Embedded in Smart TVs this Fall 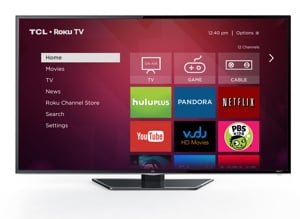 To create the new line, Roku has partnered with major Chinese TV manufacturers TCL and Hisense to provide the hardware. The user interface is all Roku TV, however, bringing the familiar look of Roku and the Roku Channel Store to your living room without the need of a set-top box.

“Just like Roku streaming players, Roku TV will have full access to the Roku Channel Store filled with more than 31,000 movies and 1,200 channels that feature TV shows and live sports plus news, music, kids, food, science, tech, fitness, foreign language and other programming – more options than all the other Smart TVs in the market,” explains Anthony Wood on the Roku blog. “Roku TV will feature just 20 remote-controlled buttons – half the number of traditional TVs – so consumers will only need to interact with the necessary controls.”

Roku TV will be available in sizes ranging from 32 to 55 inches in the U.S. this fall. Pricing has yet to be announced.