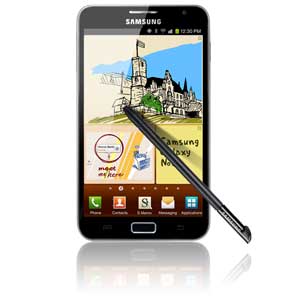 When is a phone just too big to be practical as a phone? Dell tried a 5-inch model with its Streak, and soon discovered it was a failure. Now it’s Samsung’s turn to go big with the Galaxy Note, an Android-based device boasting a big 5.3-inch display. The difference? The Galaxy Note looks sensational, responds instantaneously, runs on AT&T’s speedy 4G LTE network, and innovates with the use of a pressure-sensitive stylus.

The screen uses HD Super AMOLED technology with 1280 x 800 resolution – very sharp indeed. There’s lots of contrast, a dark black background and bright, vibrant colors. Apps look great, and video playback is among the best I’ve seen on a mobile device. There’s an 8MP camera and a large 2500 mAh battery, though what kind of real-world usage that produces remains to be seen.

The stylus is kind of a wild card feature. Odds are, poking at the screen with your finger has been just fine for the tasks you’ve tackled before with an Android phone. The S Pen is a precise and sensitive input device, able to sense 256 levels of pressure – if you’re the artistic type, it makes the Galaxy Note an interesting pocket sketchpad. For those of us who draw can only draw stick figures when testing graphics software, the character recognition capability is a more interesting use of the stylus. On the preproduction unit we took for a test drive, the it worked quite well, and was faster than poking at a virtual keyboard. It could also be helpful in photo editing software and annotating graphic images when collaborating.

So, it’s beautiful, fast and capable. But is it just too big? While the phone is large at 5.8 inches (146.85mm) x 3.3 inches (82.95mm), it’s quite thin – just 3.8 inches (9.65mm). I slipped it into my pants pocket (admittedly not skintight jeans, but still) and it didn’t feel any less comfortable than the standard 3.5-inch Galaxy S I usually carry. In a jacket pocket, the difference would be inconsequential.

Bottom line, you will absolutely have to get some hands-on time with the Galaxy Note before deciding if it’s a practical solution for you. Pricing hasn’t been announced yet either, clearly a big consideration. But this unique device that balances tenuously on the tablet/smartphone border is seriously tempting for multimedia enthusiasts interested in a big-screen experience in a much smaller package than a 7- or 10-inch full-fledged tablet.