Recent testing by SquareTrade, a provider of consumer protection plans for electronic devices, found the Samsung Galaxy S6 to be more durable than the iPhone 6 or 6 Plus, and also beats out its sister device, the Galaxy S6 Edge. SquareTrade's testing looked at a number of durability factors including drop testing, bendability and water resistance.

In contrast to the recent report that the Samsung Galaxy S6 Edge bends more easily than the iPhone 6, the Galaxy S6 survived 110 pounds of pressure. An amount that sent the S6 Edge and both iPhones to the repair shop.

Bendability has become an increasing concern as devices have gotten larger, while becoming thinner at the same time, and came to the forefront last fall during Apple's own "Bendgate" or "Bendghazi" kerfluffle after the iPhone 6 launch.

The Galaxy S6 also performed well against drops and water submersion, giving it the lowest overall "SquareTrade Breakability Score," with a 4 out of 10 points. The higher the score, the greater the risk of your device breaking due to an accident. And it is a relief to see the S6 also performed better than last year's Galaxy S5—things are going in the right direction. Not so much with the Galaxy S6 Edge...

You can see the full test results and a video of the testing process below. 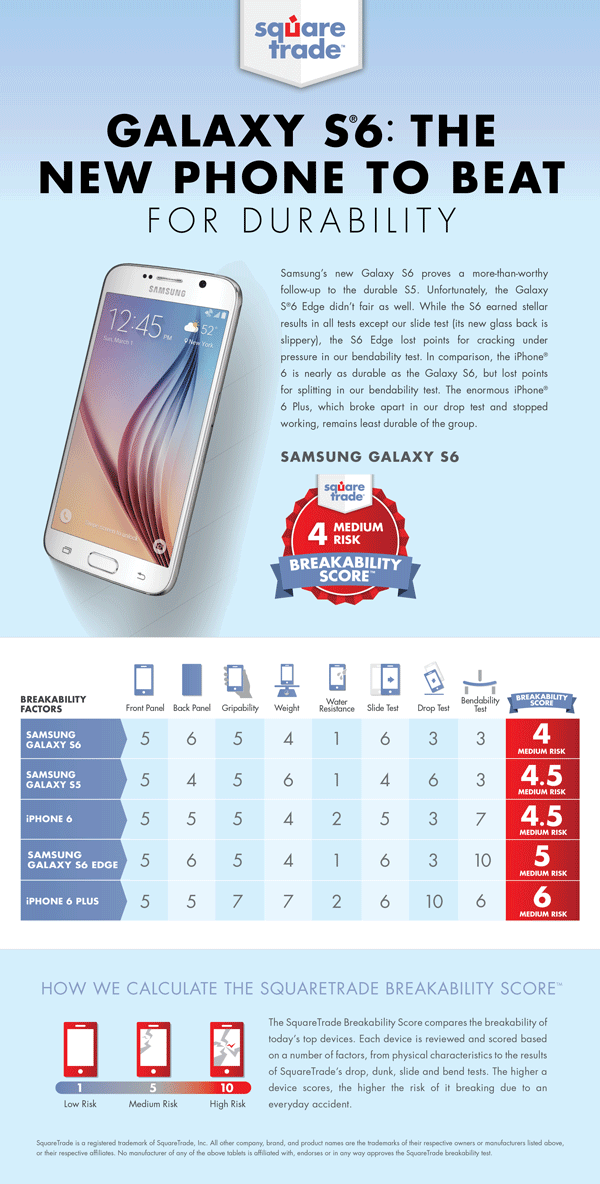 The Samsung Galaxy S6 is

The Samsung Galaxy S6 is good enough with hardware, software, design and the price. But after a while to use, most device get dropped very fast in the price.