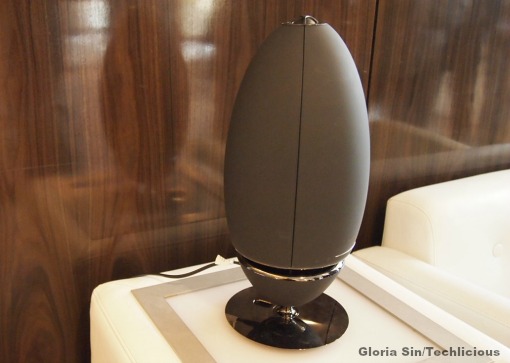 Samsung unveiled its first omni-directional wireless speaker, the Wireless Audio Radiant 360 R7, at its Spring Launch event in New York City last Thursday. Though the R7 looks more like a futuristic sculpture than a traditional speaker, its big sound leaves no doubt that it is a very capable product.

The R7's oblong egg-like shape makes it possible for sound to travel in "rings" rather than in a single direction, which means you'll be able to enjoy your music no matter where you are in a room. With a design as bold as this speaker, you likely won't be hiding the R7 behind the television but proudly displaying it on your coffee table.

The R7 has built-in Bluetooth and Wi-Fi for streaming music from smartphone, tablets and directly from the Internet. It can also be remotely controlled through the soon-to-release Samsung Multiroom app (Version 2.0).

We got a brief listen and look at both the R7 and its app, and here are our first impressions.

The R7 speaker stands at just over one-foot tall and has a matte finish that makes it fingerprint-resistant and easy to clean. There are just two shiny silver physical buttons on the front -- with the rest of the controls being capacitive touch (power, Bluetooth, mute and play/pause) -- and a glossy round base at the bottom.

At the back is where you plug in the power adapter as well as a microUSB port to plug-in a music source like a smartphone. Though we only saw the black version in person, we were told it also come in white, though no word yet on whether it'll be available in North America.

The R7 speaker features Samsung's “Ring Radiator” technology, which pushes sound all around the device in 360-degrees, rather than from just one side of a conventional speaker. In fact, the R7's sound comes from both the top and the middle of the speaker, so it can definitely make enough noise to fill a room (though we don't have exact room dimensions from Samsung at the moment).  Listening to the demo, I can attest to the fact that the R7 does deliver on the 360-degree claim and sufficient volume. Unfortunately, it was impossible to judge the quality of the sound, given the restrictions of the space.

Once you have the latest Samsung Multiroom app installed on your iOS or Android device (available on April 10, 2015), you can connect the speaker to your music source. You can easily switch between an online music service, a nearby Bluetooth device and music files that are already stored on your mobile device (the app will automatically find and organize them). Using either the app or your device's physical volume button, you can control the R7's volume and playlist -- we didn't notice any lag between the app and the speaker.

The R7 is undeniably sleek and stylish and if you already own other Samsung multi-room devices, like the Shape M7 and M5, then the R7 makes sense. But the R7’s $499.99 price tag is relatively high compared to other Internet-enabled speakers that cost less and offer more features, like line-in jacks and NFC for easy Bluetooth pairing, like the Sonos Play 5 and Monster. So making a judgement on whether the R7 is worth the extra money will have to wait until we’ve listened in a proper environment.