Should You Upgrade to the New iPad Pro?

Apple’s latest iPad Pro models receive impressive performance and aesthetic upgrades, thanks to Apple’s own M1 processor. But that’s not where the innovation stops; these new iPad Pros are definitely worth an upgrade. Here’s why.

The M1 not only exponentially increases processing power and speeds compared to Apple's last generation iPad Pro, but it also enables Apple to build smaller, thinner devices that don't get as hot and improve battery life.

Apple's new iPad Pros come with either 11- or 12.9-inch screens, but the larger version is equipped with a new mini-LED display. Instead of the mere 72 LED backlights to illuminate the display in the last iPad Pro, Apple's new Liquid Retina XDR display is lit with a whopping 10,000 mini-LED backlights with 120 local dimming zones, producing a brighter and more vibrant color display that more easily cuts through sunlight and other ambient light to enhance movies, game play, and video calls.

Perhaps the iPad Pro's most compelling feature its new ultra-wide front 1080p 12MP camera. Not only do you get a wide and un-fisheyed 120-degree field-of-view, but Apple's new Center Stage recognizes faces and automatically zooms out and pans to keep you and your crew in frame during video calls.

As with previous iPad Pros, you can mount the new models on the company's floating Magic Keyboard, now available in white, to create a more laptop- or desktop-like experience. 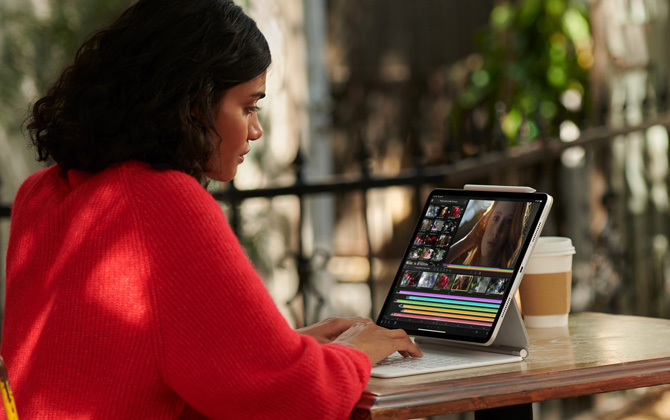 Apple has abandoned its proprietary Lightning connection and replaced it with a more universal USB-C jack, which supports both Thunderbolt and USB 4 for faster data transfer, wired Ethernet and external display connections, and charging. This change likely means that this fall's iPhone 13 also will switch from Lightning to USB-C.

One other temptation to consider upgrading: not only are the new models essentially the same price as previous iPad Pros, but you can trade in eligible older gear to get a further discount. For a limited time, you can get up to $200 back when you buy a WiFi + Cellular iPad Pro model and activate it with AT&T, T-Mobile/Sprint, or Verizon.