Should You Upgrade to the New iMac?

With a new iMac going on sale later this month, the enduring question is: is it time to upgrade? Built around the powerful new M1 chip and sporting a host of other upgrades, the new iMac is worth a long, hard look.

Looks are what you'll notice first with the new iMac. Apple has reached back to its first colorful all-in-one desktops back in 1998 and has produced versions in seven soft pastel colors – green, yellow, orange, pink, purple, blue, and silver. The new iMacs are super skinny – just 11.4mm thin, which helps them disappear into your décor when viewed from the side. Apple has also adopted a new screen size: a 24-inch 4.5K display packed with 11.3 million pixels and a billion colors to produce vivid detail for both images and text.

The new iMacs are more than just thin and pretty, however. Apple says its 8-core M1 chip makes the new iMacs 85% faster than its previous 21-inch iMac and delivers twice the graphics processing speed to thrill gamers and videographers.

For connectivity, you get an array of four USB-C ports, including two high-speed Thunderbolt jacks that can support monitors with a resolution of up to 6K and WiFi 6. For those who want a wired internet connection, Apple has moved the 16bps Ethernet jack to the power adapter that's part of the iMac's two-meter-long power cord.

There are three color-matched aluminum-encased Magic Keyboards versions, including one with direct access to emojis and one with an integrated numeric keypad. All the Magic Keyboards are equipped with a Touch ID fingerprint reader, previously only available on MacBook laptops, to provide quick, secure access and improve e-commerce security. There also are color-matched Magic Mice and Magic Trackpads. 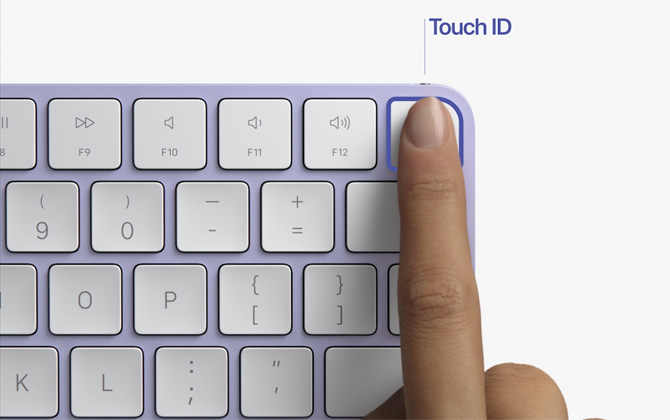 The new M1 iMac equipped with a 7-core GPU (graphics processing unit), 8GB of memory, 256GB SSD for storage, a Magic Keyboard, and a Magic Mouse is priced at $1,299 and will be available in green, pink, blue, and silver. An iMac with an 8-core GPU, two additional USB 3 ports, a Magic Keyboard with Touch ID, a Magic Mouse, and Ethernet connectivity starts at $1,499 and is available in all seven colors. The new iMacs will be available for pre-order beginning April 30 on Apple and will ship in mid-May. Trade-in discounts are available.