Have you ever played a game on your smartphone and thought about how much better it would be if you could not only see the action, but actually smell it, as well? The sweet, fruity scents in Candy Crush. The musky odor of Orc sweat in Dungeon Hunter. Ahh, the joy.

Well, your prayers have been answered. Pop Secret, the makers of microwave popcorn, just released Poptopia, a new game for iOS devices that works in conjunction with a Smell-O-Vision dongle to give you the buttery smells of popcorn as you progress through the game.

The Poptopia game is pretty simple—popcorn kernels fly across the screen and when they pop you fling them into a waiting mouth. When the butter patty appears, swipe it and you'll get a puff of butter-like goodness from the dongle. I thought the smell was pretty close to real Pop Secret popcorn (though, not exactly real butter). 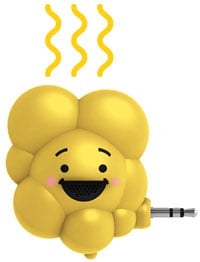 The Smell-O-Vision effect is driven by sound from your iPhone. Plug the dongle into the headphone jack and an audio receiver listens for an 18khz signal embedded in the game. That signal activates a piezoelectric unit that vaporizes the popcorn-scented oil in the Dongle.

The fun factor of the game wears off quickly, but the novelty side of having your very own iOS Smell-O-Vision device is worth a look.

Only three Pop Secret Smell-O-Vision dongles are being offered to consumers. You can bid on one through the charitable listings on eBay Giving Works, with 100% of the proceeds from sales of the dongle being donated by Pop Secret to the American Red Cross. The current auction is running through December 23rd and the final dongle will be open for bidding between Dec. 23 and Jan 2nd.