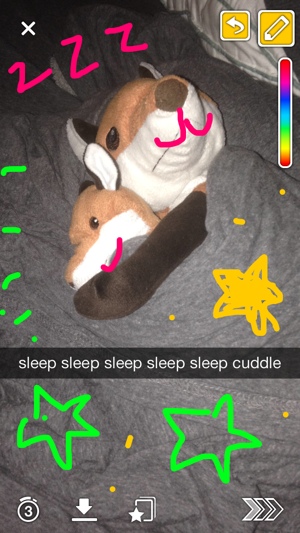 Kids are pretty fickle. Something that’s hot and popular one day can be uncool the next. Social network Facebook is a prime example: Today, Business Insider reports that social networking app Snapchat has surpassed Facebook in photos uploaded per day.

Indeed, a representative from Snapchat has revealed to a number of sources that approximately 400 million pictures make their way across the smartphone-based social network every day. Facebook, meanwhile, hosts about 350 million pictures a day. Instagram only hosts 55 million. That makes Snapchat the largest picture-sharing network in the world – for now.

For the uninitiated, Snapchat is a picture-sharing app that’s gained tremendous traction among teens. Unlike Instagram, snaps shared via Snapchat are private, sent only to a handful of people, and self-delete after the recipient has viewed the picture for a sender-set time between 1 and 10 seconds. If anyone takes a screenshot of a sent picture, the sender is notified by the app.

Much of Snapchat’s growth seems to be coming from younger users concerned about Facebook privacy. While the wrong Facebook post could get a teen rejected by a college (or in hot water with mom and dad), Snapchat pics are seen as far more private. According to a poll of Snapchat users aged 18 to 30 conducted by VoucherCodesPro, nearly half say they’ve received nude pictures through the app, and 67% say they’ve received snaps featuring “inappropriate poses or gestures.”