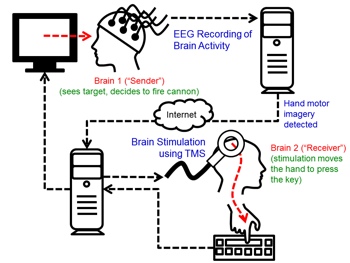 It seems like these days, just about anything can be hacked. Earlier this month, a Texas couple made news when a malicious hacker hijacked their baby monitor. The month prior, security experts warned that remote car hacking could be the next big threat. And if that isn’t enough, we have one more for you: Researchers at University of Washington have performed the first hacking of a human mind via a non-invasive human-to-human brain interface.

It’s no joke: Using an electrode-covered hat, the thoughts of one researcher were measured and recorded as electrical impulses – specifically, thoughts about specific hand movements. These impulses were sent across campus to a second researcher wearing a transcranial magnetic stimulation coil over the part of his brain that controls hand movement. When the first scientist began to think about moving his hand, the second scientist’s hand moved in accordance with the transmitted thought. Check out the University of Washington's video of the experience below..

Initially, the technology sounds like a terrifying experiment in mind control. The scientists dismiss that fear, however. “There’s no possible way the technology that we have could be used on a person unknowingly or without their willing participation,” stated UW Assistant Psychology Professor Chantel Prat.

For now, only the most basic of brain signals can be transmitted, but the researchers are working on even more complex remote commands. The hope is that one day, this kind of technology might help the disabled and those with Locked-in syndrome communicate their needs to the outside world without words.

For more on this remarkable research, check out the University of Washington’s website.