What You Need to Know about the Goverment Spying on You 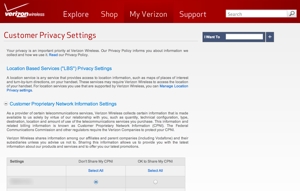 Verizon may very well just be the tip of the iceberg. Just hours after U.K. news organization The Guardian revealed that the FBI was collecting millions of private citizens’ phone data, numerous members of the United States government have revealed that data collection efforts are far broader, and have been going on for far longer, than was immediately reported.

And now, it gets worse: It was also revealed he government has backdoors into virtually every major Internet company’s data servers, where it can obtain information it views as vital to national security without need of a warrant.

According to a confidential document leaked to The Guardian, the National Security Agency (NSA) has created a program named PRISM that has given it unfettered access to the databases of virtually every major company that stores your data.

In a document leaked to The Guardian, specific companies involved in offering the government access to your data are named. Feds have had access to Microsoft’s data since September 2007, Yahoo since March 2008, Google since January 2009, Facebook since June 2009, YouTube since September 2010, Skype since February 2011, AOL since March 2011, and Apple since just last October. Google, Microsoft, Facebook, and Google have all denied claims that the government has direct access to their data servers.

Obviously, because of the sheer amount of data being collected and sifted through, it’s unlikely a human being in Washington, D.C. will ever lay eyes on any of your old deleted Xanga blog, pictures of your 7th grade trip to Philadelphia, or emails about a secret love affair. Unless, of course, someone decides that those records pertain to national security, in which case the government can legally seek information first and ask permission later.

What data is being collected?

When you make a call with a Verizon phone (or any other, really), a searchable record of whom you called is not kept on a long-term basis by the company. That fact is problematic to government national security agents, who believe these records to be absolutely vital in determining who terrorists are talking to and why. This court order allows the government to collect and store this data itself for the purposes of fighting terrorism.

Scary though the government order reads, it’s important to note that it does not empower federal agents to listen in on private phone calls. Only metadata is being collected, such as information about what numbers were being called and when calls were being placed. Verizon keeps very close tabs on customers' physical locations -- data the government has access to as well via court order.

When it comes to Internet companies, though, privacy concerns are much more worrying. According to a leaked April 2013 NSA document, the federal government has access to pretty much everything of yours that’s on the Internet, whether it’s hidden behind a password or not. Specifically, the NSA has access to, is collecting and storing e-mails, voice and video chats, videos, photos, stored data, VoIP, file transfers, video conferences, notification of login activity of desired targets, and online social networking details. Nothing, it seems, is off limits.

The Obama Administration supports the plan.

Though the effort to collect private phone records began during the days of the Bush Administration, recent news reports reveal that it has the full support of President Obama, as well. Collecting private citizens’ phone records “has been a critical tool in protecting the nation from terrorist threats to the United States,” according to senior officials. In 2006, however, then Senator Obama criticized a Bush appointee to the CIA over similar wiretapping concerns and government intrusion into personal records.

The administration has yet to comment on the more widespread PRISM program.

It’s been going on for seven years.

The leaked phone records document applies specifically to Verizon records, though it would be naïve to think that Intelligence Surveillance Courts haven’t made similar rulings granting the government secret, blanket access to AT&T, Sprint, and T-Mobile records as well. And here’s another shocker: According to the U.S. Senate, this type of surveillance has been going on for the last seven years. 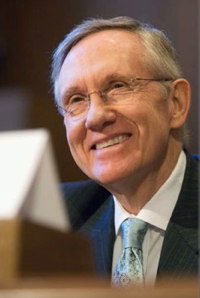 “Right now, I think everyone should just calm down and understand that this isn’t anything that’s brand new,” stated Senate Majority Leader Harry Reid (D-NV).

Republican Saxby Chambliss of Georgia corroborated this fact. “Everyone’s been aware of it for years, every member of the Senate,” he told The Hill. Chambliss also noted that no citizens had filed a complaint about the secret program, though it’s not immediately clear how anyone could have known it even existed given the extreme layers of secrecy added to the order.

Just because every member of the Senate knew about the classified effort doesn’t mean every member supported it. Senators Ron Wyden (D-OR) and Marc Udall (D-CO) have been dropping hints about the program’s existence for years, saying a “loophole” existed in the law to allow the government to do exactly this. The two senators offered an amendment in 2012 that would have stopped the government from searching private citizens’ phone records incidentally collected during a national security investigation. It was defeated in Committee by a vote of 2 to 13.

The Senate supports it.

Abhorrent though the idea of warrant-free collection of your private data may be, the U.S. Senate appears to be largely in favor of the effort. Senators voted 73 to 23 to reauthorize the Foreign Intelligence Surveillance Act just last year, the legislation that empowers the government to seek these records.

Most Republicans defended the effort. “I’m a Verizon customer,” explained Sen. Lindsey Graham (R-SC). “If my number pops up on some terrorist’s phone, I’m confident that the FISA court is not going to allow my phone calls to be monitored by my government unless (Attorney General Eric Holder) and others can prove to them that I’m up to terrorist activity through a probable-cause standard.”

A small handful of Democrats fall in opposition to the administration’s anti-terrorism tactics. “Americans will eventually and inevitably come to learn about the gap that currently exists between the public's understanding of government surveillance authorities and the official, classified interpretation of these authorities,” wrote Sen. Wyden to Attorney General Eric Holder in a prescient 2011 letter about these programs. Former Vice President Al Gore took to Twitter to call the program “obscenely outrageous.”

Editor's Note: what you can (or can't) do to protect your privacy

There are some measures you can take to protect your privacy. You can browse the web anonymously, using a VPN (Virtual Private Network) service or TOR to protect your IP address from being transmitted to the sites you visit. Just make sure you don't use the same browser for private and non-private sessions; sites could recognize cookies from your non-private sessions. It's also safe to assume that if the government is gathering this data from Verizon, Google and other major players, they're gathering data from VPN providers as well, and the VPN logs could very well reveal your IP address. It's also widely believed that the NSA and other spy agencies operate TOR nodes specifically for the purpose of collecting information on the data passing through them.

Of course none of this will prevent the government from spying on your content at the other end of the channel, within Gmail or Apple. To help with that, you should store your files encrypted. Services like Google Drive and SkyDrive do have encryption, but it's to keep out hackers, not the government. To lock your files with a key that only you have, you'd want to use a program like BoxCryptor. Though with advances in anti-encryption technology, the government may well be able to decrypt those files, or at least will have that capability in the future.

So, each of these methods certainly will make snooping on your activities more difficult, but we're a far way from calling it impossible. To make that happen, we need to get our legislators to changes the laws.

RE: What You Need to Know about the Goverment Spying on You

Is this just Verizon cellular phones or does it also include home Verizon landlines?

Assume that it's both

The disclosed order is for Verizon Business Services and includes landline and cellular calls. Given the incredible breadth of what has been revealed, it is probably safe to assume that the government did not stop there and that all phone records may be up for grabs.

Safe to say it's been longer than 7 years

The 7 years only covers the “legal” aspects of this situation. It’s a sure bet that the NSA and others have been collecting info on US citizens for decades (the FBI was doing it back in the 50s and 60s) and will justify it, which would no doubt be upheld in a secret court, that it’s for national defense and security reasons—those reason have ALWAYS superceded citizens rights. If you have nothing to hide, don’t worry ... if you do ... don’t worry; they probably already know. Welcome to Amerika. (Who was it we were afraid of in the Cold War?)

All this "spying" and the Boston Bombers weren't caught

I have nothing to hide and the government has and does things we will never know about.  However, I wish they had had enough spy savvy to catch the Boston Bombers.  So much for all their advanced technology.

AVG has failed me. What

AVG has failed me.
What do I do I have a Sony Xperia X