If you run Windows 10, you should drop what you're doing and update your computer immediately. A security flaw discovered by the National Security Agency allows hackers to exploit a bug in Windows 10’s cryptographic system, which handles security encryption. That means hackers could fake the digital signatures that make software appear to come from trusted providers, so it's easier for them to spread malicious software. And because this software appears to come from a trustworthy source, even your antivirus won’t stop it.

It’s unusual for the NSA to be involved in advertising vulnerabilities like this — and the fact that they’ve publicly announced this exploit goes to show how serious it is. At worst, this bug could let hackers completely take control of your system — and at best, it could let them access encrypted communications to gain access to all of your personal information. In short, it’s a particularly bad vulnerability that you want to patch as soon as possible.

Windows 10 is the most-used operating system in the world, which makes it a popular target for hackers. Even though neither Microsoft nor the NSA have seen hackers exploiting this bug yet, it’s important to fix it immediately. Hackers work fast, and they’ll be looking for unpatched systems to exploit.

Fortunately, a fix is already available. Updating your system now is much easier than getting rid of malware — and if hackers steal any of your data, it’s gone for good.

Windows 10 automatically downloads and installs updates, so patching this vulnerability shouldn’t be difficult. However, you shouldn’t wait for Windows to get around to applying the patch, which it may not do while you’re sitting in front of the computer. You may have already seen a window pop up saying that your computer will restart “outside of your active hours” to install this security update. But we don’t recommend waiting even for a few hours. 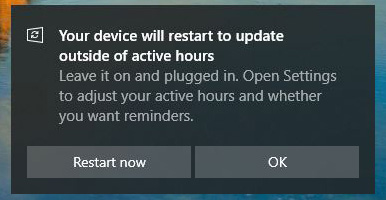 To be sure your system is up to date — or to force it to apply the patch right now — go to Start > Settings > Update & Security > Windows Update and click “Check for updates.” From there, just follow the instructions and let your computer apply the latest patches.

Making sure your system is safe from this serious threat is as easy as clicking a few buttons and taking a coffee break. Delaying only puts your computer and all of your personal data at risk, so don’t wait to update.

Nevermind you have to scroll thru the listings and get your current version…sorry bout that.

A lot of people are seeing failed updates with this, and at least one has found his Win10 pc bricked as a result.

A lot of people are seeing failed updates with this, and at least one has found his Win10 pc bricked as a result.

When you go to the MS site for those updates you have to be extra careful which one you choose. When I first went I chose the first one without really looking hard at the choices. I still run 1803 64 bit an upon choosing the correct version was able to install that update…around 980 MB’s worth.

So they do work you have to choose wisely.

Every update has some level of issues

It’s probably more fair to say “some” people are seeing update issues. Given the hundreds of millions using Win 10, it’s not clear these issues are very widespread. And, given the severity of the issue this update is fixing, it would still be the right decision to move forward.

how can i tell if the patch for this problem has been applied/installed on my system?? (does it have a KB prefix or something else)

Check the Microsoft site for the relevant update

In the article, we provide a link to the Microsoft page which provides all of the patches (KB patches) related to this issue. The specific patch number will vary depending on which version of Windows you have. The link is: https://portal.msrc.microsoft.com/en-US/security-guidance/advisory/CVE-2020-0601

In your case, KB4528760 is the correct update for most recent Windows 10 versions.

john,
thx for the info.

“Fortunately, a fix is already available.” doesnt really indicate who or what provided the fix.

“Fortunately, Microsoft has already provided a fix.” would be more descriptive.

Microsoft is as cryptic. nowhere on that page does it mention KB articles, just lists “Article” and “Download”. now, i know that “Article” means KB.

Yes, go thru the list and find the KB that pertains to your version (1803, 1903 etc) an apply that one. I still run 1803 and have my Win10 set up as a business account with OS updates set on a 365 day delay. That is to make sure these new versions have the ‘bugs’ worked out.
Just find the one that goes with your iteration they are anywhere from 8-900 MB to 1 GB in size and yes they are issued as a ‘cumulative’ update.