What You Need for Your Kids' Travel Entertainment Kit

Summer travel season begins in just a few short weeks. And whether you plan on traveling by train, plane or automobile, the chorus of "Are we there yet?" is inevitable. You may be able to stave it off, though, if you pack your kid's travel entertainment kit properly. Here's what I suggest you take with you. 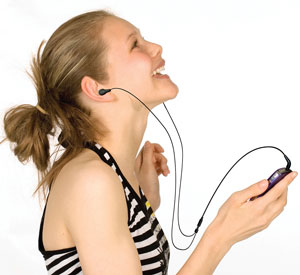 Kids' headphones are a must for any travel kit. But make sure they're specifically designed for kids to ensure they won't damage their hearing. According to a U.S. government survey, 12.5% of children ages 6 to 19 (approximately 5.2 million children) have permanent damage caused by exposure to loud noises.

). Etymotic makes quality headphones and these are no exception. The ETY Kids 3 model ($79 on Amazon.com

) has the in-line controls for iOS devices and work with cell phones. For young children, the Kidz Gear Wired Headphones ($19.99 on Amazon.com

) or Kidz Gear Wired Headphones with inline mic and controls ($39.95 on Amazon.com

) are a good choice. Their over-the-head styling make them easy to put on, they fit comfortably and deliver good sound. Volume limiting isn't built-in, but a free volume-limit cable comes with the headphones.. 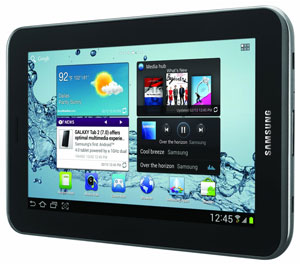 If you don't want to spend $399 for an entry-level iPad, a tablet running Android provides a great combination of apps, video entertainment and price. My pick for kids would be the Samsung Galaxy Tab 2 7.0 ($249 on Amazon.com

). This 7-inch tablet is thin and light; its dual-core process holds up to gaming; and it has 8GB of onboard memory plus a microSD slot, so you can load it up with videos. And, unlike the Amazon Kindle Fire, the Samsung Galaxy Tab 2 7.0 can access the full Google Play app marketplace. 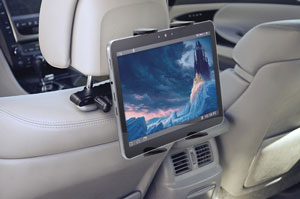 Holding a tablet can become tiresome on longer journeys, so you'll want some sort of stand or mount for your kid's tablet. For planes and trains, the rooCASE Dual-View Multi-Angle Leather Folio Case ($25 on Amazon.com

) protects the tablet when it's not in use and transforms into a stand—both horizontally and vertically. For the car, try the Arkon Tablet Headrest Mount ($29.50 on Amazon.com

You can bring up to 300 HD videos with you on your next trip with a Wi-Fi hard drive, like the 500GB SeaGate GoFlex Satellite Mobile Wireless Storage ($199.99 on Amazon.com

). The GoFlex Satellite can stream video to as many as eight devices at the same time over the Wi-Fi hotspot it generates. The battery will last for up to seven hours. 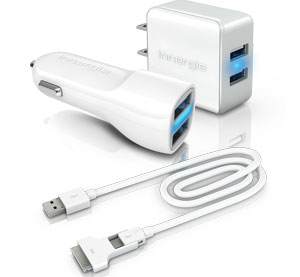 There are definitely worse things that can happen on long trips, but running out of juice for portable entertainment devices can be a headache. So bring a backup battery-powered charger and a car power adapter. The Innergie USB Travel Charger Kit ($41.99 on Amazon.com

) will provide power to two USB devices through your car adapter and comes with a two-USB wall charger. Add a PocketCell back-up battery charger ($79.99 on Amazon.com

) and you can keep your tablet alive for an additional 4.5 hours on the plane or train.

Kids and goo go together, so you'll want an easy way to clean up. There are cheaper solutions out there, but I like the simplicity of the Monster Cable CleanTouch Pen ($16.09 on Amazon.com

). Use the pen to erase smudges and then follow up with the built-in cloth. It's even TSA compliant (under 3 oz.) for your next flight.