by Jen Rabulan-Bertram on August 17, 2012
in Family and Parenting, Baby & Toddler, Guides & Reviews 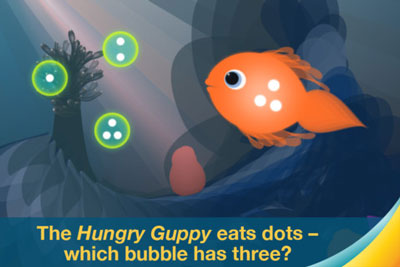 Motion Math: Hungry Guppy for iOS devices is a bright and visually appealing app for pre-schoolers that's just as educational as it is fun. Instead of solely focusing on number recognition to introduce addition, Hungry Guppy uses dots.

What makes this app different from other math games geared to pre-schoolers is that there's an emphasis on the dots as well as number recognition. As the player progresses by visually representing number values with dots, numbers are added to the mix. But if the player is ready at the outset for numbers, there's an option to play with number combinations. And since we're talking preschoolers, there's no win or lose scenario. Hungry Guppy's size goes up as he's fed with correct answers, but then he gets smaller when dots are counted incorrectly.

So how does an educational math game keep preschoolers engaged? When dots are added incorrectly or if a player gets distracted, there's a vocal prompt to remind the player of what's being counted. And because preschoolers appreciate rewards and personalization, players can earn color pearls to customize their guppy's colors. 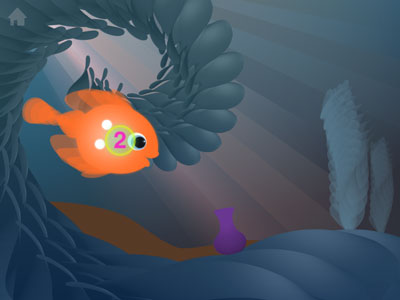 I appreciate that Hungry Guppy teaches the foundation of math in a way that doesn't put so much weight on numbers up front, so even a precocious toddler can feed the guppy while unknowingly learning math. The dots serve as training wheels, in that it builds a foundation for the preschooler's math knowledge while creating a sense of comfort with numbers and the simple everyday act of feeding a guppy. Feed the fish the right amount of dots, he gets full, and cool, we're learning math, too! By combining dots the preschooler learns to add, but they're also learning that there are different ways to create quantities. (Adding two dots to three dots gets you five dots, so does adding one dot to four dots.)

Hungry Guppy is one of the first math apps that truly engaged my four year old. He enjoyed the colors and feel of the game, as well as the overall premise. When I kept telling him that he was doing math, he was unfazed; but when we talked about feeding the Guppy dots, he was quite proud of his progression and how big his fish was getting. Earning the ability to personalize the color of his Guppy was a motivating factor too.

The fifteen levels and various play options give this app a great range for player ability and progression. The colorful graphics and tropical music are solid features that keep preschoolers entertained. Overall, Hungry Guppy is a fun way to learn the foundations of math and number recognition with a simple concept that keeps preschoolers engages.

The Motion Math: Hungry Guppy app is available for $2.99 on iTunes. For older kids ready for multiplication concepts, check out Motion Math: Wings.