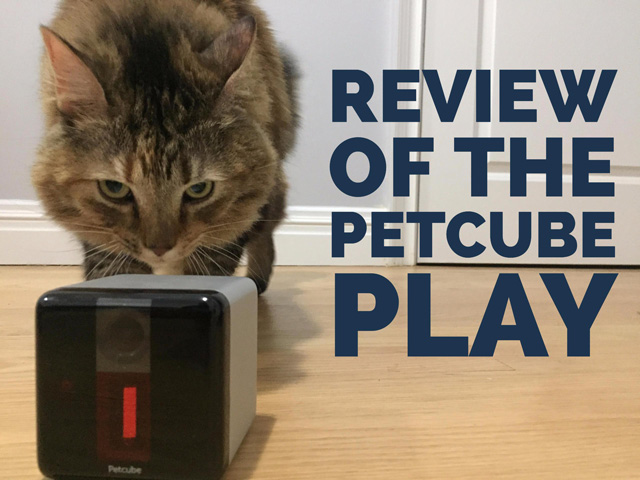 If you talk to my cat Tanzie, she’ll tell you I'm a huge animal lover. She’ll also tell you I can be a little overzealous when it comes to her well-being. So naturally enough, I was thrilled when monitoring cameras designed specifically for pets hit the marketplace.

There are plenty of reasons to opt for a pet-centric camera if you're trying to keep an eye on a furry friend at home. Like traditional security cameras, most pet cams offer night vision displays and alert you when they sense sudden or extreme movement or sound. But pet cams also include pet-friendly features such as two-way voice controls, laser pointers and treat dispensers that let you interact with your pet while you're away.

At the forefront of this innovation is the Kickstarter-funded Petcube, founded in 2013 by pet lovers who needed a solution to keeping their pets entertained and themselves sane. The company has developed two interactive pet cams, the original Petcube Camera ($149 on Amazon) and the Petcube Play ($199 on Amazon). The Petcube Play offers a simple, sleek design with two-way audio communication capabilities, a camera with 138-degree views and night-vision technology, and an on-board laser light.

Curious to see how the Petcube Play performs, I got my hands (and my cat’s paws) on one — and we were impressed. 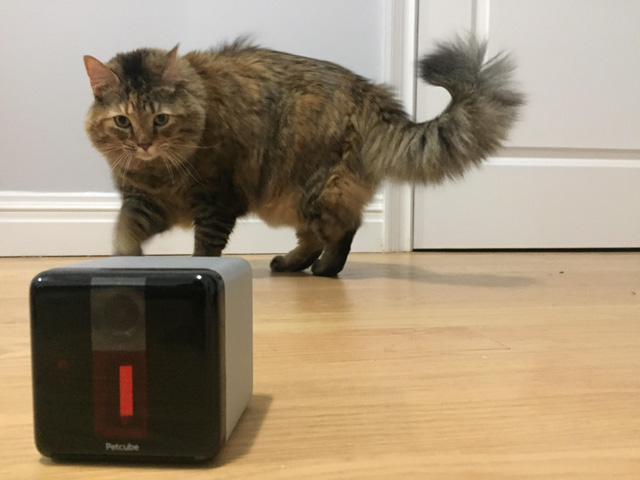 Seeming to follow the style lead of Apple, the Petcube Play comes in matte silver, carbon black or rose gold aluminum with black accents. It's smaller than your average Chihuahua at just 1.3 pounds and 3 by 3 by 3 inches. Its tiny size means you can position it anywhere on a flat surface without being obtrusive. Alternatively, screw it onto a tripod using the built-in mount. The camera leads in interactive pet camera products, offering color and night-vision modes, 1080p HD and a 138-degree viewing angle. A two-way audio stream using the built-in microphone and speaker system lets you talk and bark or meow back and forth with your pet, and a laser pointer lets you interact with your pet even when you’re away.

Most pet cameras require you to download their app to sync the camera to your Wi-Fi network. Sounds simple enough, so I played it cool and tried setting up the Petcube Play without reading the instructions. I downloaded the accompanying Petcube app (free for Android and iOS devices) to get started, created an account and then followed the on-screen setup instructions. But to my dismay, the darn thing wouldn’t proceed to connect to Wi-Fi. I went back to the printed instructions, and my hubris is now to your benefit.

What some users (like me) may find challenging is the LED bulb notification on the front of the device — or more specifically, its color. The LED light displays yellow, orange, green, white or blue (either steady or pulsing) to inform you if the unit is loading, connecting or online. At first glance, the LED light may look green, but if you cup the light between your hands, you may notice it’s actually yellow,  which means the camera is still loading the software, or orange, which tells you it can’t connect to Petcube’s servers. This issue can particularly be a problem if you are visually impaired or color blind.

If your internet connection is strong or you see the wrong bulb color after more than 10 minutes, go ahead and restart the device by inserting a pin into the restart hole in its base. After a quick restart, setup is simple. From plug to play, I was up and running in under five minutes.

When you buy a camera, seek out the sharpest lens and resolution your budget will allow. Since pet parents’ digital photo albums notoriously rival that of their friends with human children, owners want camera quality that's up to snuff. To review the Petcube Play’s camera quality and features, I installed it in a space I knew Tanzie frequented while I was away: the bedroom. (Hold the shocked gasps.)

I knew going into testing that the Petcube Play has an impressive, full HD camera with a 138-degree lens. However, I wasn’t convinced that quality would extend to night vision mode as well. Companies have marketed this feature (often referred to as low light mode) as a security measure in the past, and sometimes the image is too grainy or dark to be of any real use to viewers. I was impressed to see that the Petcube Play's automatic night vision function produced good images even in my light-tight bedroom. The camera and audio both seem to have a skittish-cat-fast response time. There was just a 0.5-second delay during testing. 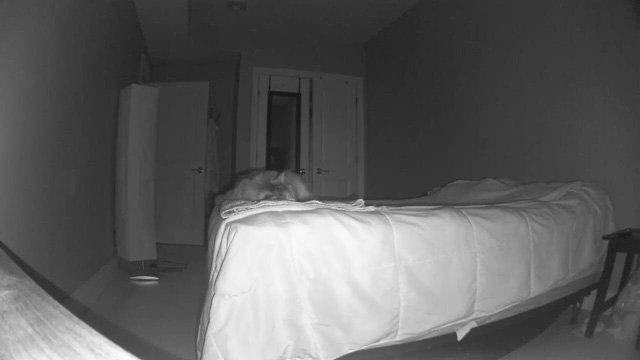 Since the cameras are what really make or break these pet monitoring products, I compared the Petcube Play to its most highly rated competitors, including the PetChatz HD ($379 on Amazon), the Petzila Petzi Treat Cam ($165.95 on Amazon) and the Motorola SCOUT66 ($79.99 on Amazon).

While none of the three are equivalent to the Petcube Play, the Motorola SCOUT66 came pretty close. The SCOUT66 has a lower resolution (720p versus the Petcube Play’s 1080p) and a narrower field of view (60 degrees versus the Petcube Play’s 138-degree lens). But that the narrower field of view makes it easier for the SCOUT66 to hide its lower resolution. Its image quality doesn’t look half bad, especially if you’re more focused on the mess Fido or Fifi made in the kitchen after you forgot to put the lid on the trash can. As for lag time, the SCOUT66’s camera clocked in with a 1.5-second delay, which is manageable.

Not convinced? When you review the photographic evidence below, it’s easy to tell how all four cameras visually stack up. 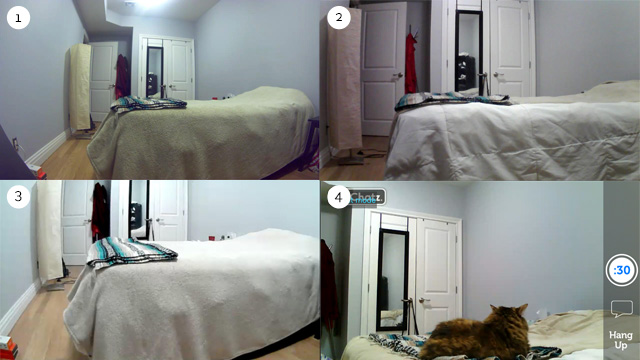 The Petcube Play has a safe 5mW 3R class laser (that won’t blind you if you don’t point it in anyone’s eyes) designed to help you keep your pet entertained and active. Testing the laser was fun for both my cat and me — clearly, she needs the exercise — although the feature isn’t perfect. The laser wasn’t very accurate out of the box because of jostling during shipping. Petcube's solution lets you calibrate the laser through the app, resulting in a much more accurate game of kitty laser tag.

After you calibrate the laser by playing a short game of “find the laser on the screen,” adjust the settings to auto, on or off. Then drag or tap your finger on the screen, and watch your pet be mesmerized by its jerky, slightly delayed movements ... at least for a little while. Although it’s not the perfect laser toy, my cat found it much more intriguing than the pen laser I bought her a while back. Go figure. If you want to keep your pet entertained even longer, set the laser to autoplay to create random movements whenever the motion detector goes off.

Another neat out-of-the-box feature: the sensor alerts default to cat purrs or dog barks. I’ve personally set mine to the sweet melody of a bark just to annoy my significant other and remind him that I’d like to adopt a dog this year. (Yes, there’s a Do Not Disturb mode.)

The Petcube Play lets you access the video feed on the fly and the last four hours of video through the Petcube Care service for free. Petcube Care saves your footage when the motion and sound sensors are triggered, the laser is set on on auto play or when you interact with your pet. Unfortunately, you can’t connect multiple cameras to the same Petcube/Petcare account, which could be a nuisance in a multi-pet household or when your pet frequents more than one area of the home.

Petcube Play reviews average 4.2 out of 5 stars on Amazon, with 69 reviews. Complaints centered around the issues I experienced during testing, including connectivity and laser accuracy issues. Verifying internet settings and/or restarting the camera were recommended for Wi-Fi issues. While Petcube reps say laser calibration issues could mean the product was damaged during shipping, consumers are entitled to a free replacement under warranty terms.

The Petcube Play has a 30-day guarantee and a one-year limited warranty.

The Petcube Play is a solid pet monitoring camera that captures crisp images day or night, no matter what the lighting conditions. It's rounded out with a laser toy that intrigues even the most sluggish of pets. At $199 on Amazon, the Petcube Play is an affordable and just about purr-fect companion for your furry (or hairless) friends.