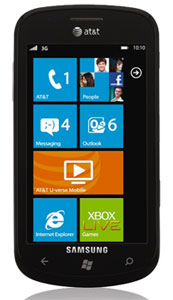 If you’re looking for a Windows Phone 7 device that can compete with the other smartphones on the market, the Samsung Focus delivers. It’s sleek, light, has a decent battery life and feels good in your hand. Plus it has a scratch-resistant display, which makes those screen protectors a thing of the past (see the video below).  It won’t drive you to switch to Windows 7 Phone, but it you’re on the fence, it may make your decision easier.

It’s obviously made of plastic, but attention to detail on the finish saves it from seeming cheap. First there's the scratch-resistant glass, which means no ugly screen protector. Plus, the USB connector is protected by a sliding door, the back of the Focus is contoured, the edges are tapered and there are metallic accents that give it a polished look.

Unfortunately the sound doesn’t quite match up. It has average loudness and quality as a speakerphone, but playback through headphones is on the quiet side. Maximum volume on the Focus was comparable to about 80% volume on the iPhone—something that's only noticeable when listening to music.

The Windows Phone 7 operating system handles all the smartphone basics well, and in some cases admirably. What makes Windows Phone 7 different from its competition? It starts, appropriately enough, on the Start screen where the customizable app tiles contain usable information rather than just a pretty icon. And deeper in, it works to bubble up useful information and functions that cross app lines.

For those of us who use our phones for work, Windows Phone 7 offers built-in support for Office files—Word, Excel, PowerPoint and OneNote. Opening an attachment from email and viewing the document were about as easy as can be expected from a mobile phone.

There’s no cut-and-paste, so editing is a pain. Cut-and-paste has been promised by Microsoft for 2011. But it can’t come soon enough, as far as I’m concerned.

While the app store was weak at launch, it’s really coming along. Some favorites I have loaded include Netflix, Twitter, Facebook, Yelp, Slacker Radio, Fandango, YouTube and Weatherbug (which pushes weather info to its live tile on the start screen). Of course it’s still nowhere close to the number of apps available for Apple’s iOS 4, Android or even Blackberry.

One other big disappointment with Windows Phone 7 is the lack of true multitasking, which means you can’t run third party music apps in the background. You can play tracks using the Zune player while checking email, but not Slacker Radio.

Samsung loads its own app for the Focus, the Daily Briefing. The concept makes sense—weather, news and stocks all together at your fingertips. Unfortunately, it doesn’t automatically update when you open the app, you need to refresh it manually, and there’s no information pushed to its live tile on the start screen.

Like the iPhone and many Android devices, Windows Phone 7 doesn’t support Flash, which means that on certain sites you won’t be able to play videos or interact with some aspects of the navigation. There’s a YouTube app that enables video playback if sites use YouTube’s regular video player, but not if the site uses the YouTube iFrame player, which is what we use for Techlicious.

The Samsung Focus has a 5MP camera with an LED flash that doubles as a video light when taking SD or HD 720p videos. Autofocus and shot to shot time were definitely above average for a cell phone. The image quality for both the stills and video is soft and somewhat noisy—better than most other mobile phones, but you'll still want a dedicated point-and-shoot for memory keeping.

Samsung brings some added functionality to the camera, with a wide dynamic range and anti-shake modes. But we didn't find either to be particularly helpful. The dynamic range did boost the overall exposure somewhat, but not did not solve uneven lighting issues the way the HDR feature of the iPhone 4 would.

With its 4-inch screen, the Samsung Focus is wide enough for thumb typing when held vertically, and spacious horizontally. It also has a word suggestion bar that updates as you type and will autocorrect your mistakes. It was surprisingly accurate. You can also go back and tap on a word and it will pull up the same suggested word bar so you can make a substitution.

Navigation consists of the start screen, which you can customize with your favorite apps, contacts, music—pretty much anything, and second screen with a full list of apps. Within apps, there are usually multiple screens plus a navigation bar at the bottom with context sensitive buttons and a menu icon that brings up additional options. The buttons are small, which might cause some problems for those with large fingers.

The Samsung Focus comes with 8GB of onboard memory, which should be plenty for most people, and a microSD memory card slot for an additional 32GB.

Under normal (for me) conditions with occasional calls, web browsing and app usage, the Samsung Focus easily lasted me through the day.

The Samsung Focus is available from AT&T for $199.99 or Wirefly for $FREE—both with a new, two-year customer agreement.

When compared to the other Windows Phone 7 devices, the Samsung Focus is my favorite. I like the bright display, smaller form factor and the fact that it is appreciably lighter.

When you broaden the choices to Apple and Android, though, the Samsung Focus doesn’t break new ground. There are no 4G speeds, no mobile hotspot capabilities, no front facing camera. It won't make you switch to Windows Phone 7, but will keep you happy if you do.

It's a good thing that

It’s a good thing that it does not need a screen protector.

Recently purchased the Samsung Focus with Windows 7. Very disappointed that the photos and videos are “locked” into using the Zune program so that you cannot see, email, modify, or work with any of the photos or videos unless you go through Zune…which is not a versatile program to manage your videos or photos.  I rely on my phone for work as well as pleasure. I am in real estate and I need to be able to get to my photos and videos by more than one manner or program than Zune.  It is EXTREMELY frustrating that this feature should fall so short…  I will be returning this phone for a phone that is easier to use and has more versatile features.

If you're syncing your images

You can have the images auto-sync to the cloud in your skydrive for your live account.  Not sure why the person above was complaining about having to use Zune.  Also, Zune is awesome.  If you had an iPhone, you would be forced to use iTunes in the same manner. Just like the iPhone, there are also several apps that let you upload and download your photos onto services such as picasa, photobucket and flickr.