When you open the Galaxy Buds Pro box, you’ll find the buds nestled in a 2” by 2” by 1” case, which is only a smidge larger than the varying AirPods cases and smaller than nearly all other true-wireless buds.

Also inside the packaging is a smaller package with a USB-C charging cable and small and large silicone ear tips, in case you want to swap out the medium-sized tips already attached to the buds. Under the box is a slim black package that is almost a false bottom that you have to dig out to get the Quick Start Guide.

The buds themselves are as stylish as a bud can be, not anywhere near as aesthetically obnoxious – or admittedly distinctive – as the Apple AirPods. Ergonomically, Buds Pros are smaller-than-thumb-sized, a bit slippery, and easy to drop. None of the available Buds Pro colors – Phantom Black, Phantom Silver, or Phantom Violet, which match the available Galaxy S21 phone hues – are particularly noteworthy since the buds themselves nearly disappear in your ear. Since the buds lay flush inside your lobes, a stray face mask strap won’t accidentally dislodge them.

The Buds Pro also are IPX7 rated, which make them pretty much waterproof.

Setting up the Galaxy Buds Pro

If you have a Samsung Galaxy device, Samsung says the Buds Pro will automatically pair simply by opening the charging case and tapping through a couple of pop-up screens on your Samsung Galaxy device. However, that only works if the Samsung Wearable app on your Galaxy device, your Android OS, and the Samsung One UI OS are fully updated to their latest version. Once all the software is up to date, make sure Bluetooth is turned on. NOW you can open the Buds Pro case. After around five seconds, a pop-up window prompts you to pair the buds, which all happens in seconds. Then, once paired, you then are asked to approve access to your contacts and phone functions, then you’ll likely have to update the Buds Pro software. NOW you’re good to go.

If you have another smartphone, you can pair the Buds Pro the way you’d pair any other set of true-wireless buds. Go into Bluetooth settings on your phone, open the case to put the Buds Pro in pairing mode, and select the Buds Pro from the list of new devices.

The Wearable app is where you can access and set up the Galaxy Buds Pro’s innovative features. You can customize the Buds Pro on-bud “touch-and-hold” controls – toggling between ANC and ambient mode is the default for each bud – or you can choose touch-and-hold to activate Samsung’s Bixby or Alexa voice assistant, volume up/down, or Spotify. Single- , double- and triple-taps on each bud are hard-wired for pause/play, next track/answer-end call, and previous track, respectively. Or you can turn off the tap controls all together. 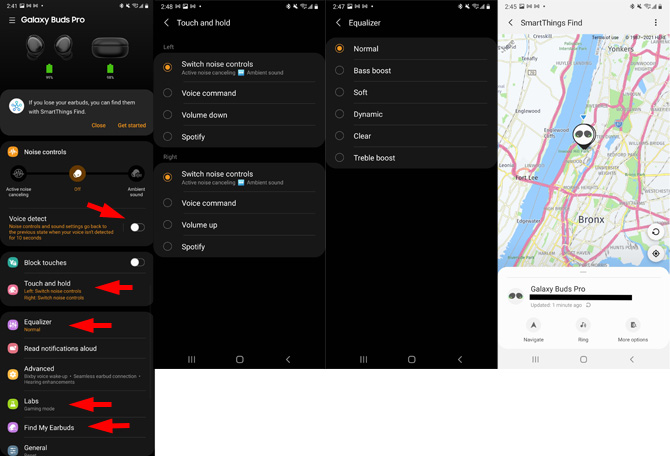 You can only turn off the ANC/ambient mode – returning the Buds Pro to their natural state – in the Wearable app, which also includes power level data.

There is an iOS version of the Wearable app to use with previous Galaxy Buds models, but it does not support the Buds Pro. iPhone owners can only access the Buds Pro basic functions available via the tap-touch or tap-hold on-bud controls. Therefore, we don’t recommend the Buds Pro for iPhone users.

Samsung claims its ANC reduces background noise by up to 99%. But firmly-fitting ear tips that create a tight seal really does most of the heavy noise stifling lifting, with the ANC slicing off remaining high-frequency leakage. Samsung has been a bit chintzy by including just three sets of ear tips to get the earbuds to fit properly.  A plethora of similarly- or lower-priced buds include four or more sets of tips. To get a tight noise-isolating seal, Samsung says to insert the Buds Pro and twist it to fit.

I pitted the Buds Pro against loud talking-heads on cable news combined with 75db of YouTube Boeing 777-300 cabin sound. With loud tunes playing, the Buds Pro were able to dampen around half of the chatter but left a higher-than-expected level of background engine hum. I’d still tote the Bose 700, Sony WH-1000XM4, or similar over-ear noise-canceling cans for plane trips to isolate myself from the droning white noise. However, in more everyday use, the Buds Pro did an acceptable job of shutting out typical life cacophony. You can adjust the ANC level to High or Low in the Wearable app, although I couldn’t discern a difference between the two.

While the Buds Pro ANC is good, not great, their ambient mode, which is an ANC mode, is astounding. You can choose between four ambient mode settings: Low, Medium, High, and Extra High. Essentially, Medium is what you’d hear without the Buds Pro in your ears. Both High and Extra High significantly boost ambient sound, especially noise. If you suffer hearing issues, you’ll be tempted to wear the Buds Pro all the time (or at least as long as the battery lasts) for conversation or TV watching. How the Buds Pro compare to the new Olive Pro buds, which are actually an FDA class II medical device hearing aid, we’ll have to let you know.

Features for Buds Pro owners of other Samsung devices

Other than their singular amplified ambient mode, Buds Pro’s other primary benefit is its tranche of Samsung-specific functions.

With Auto Switch, for instance, the Buds Pro Bluetooth connection can automatically be passed from one Samsung device to another, as long as said Samsung devices have Samsung’s One U 3.1 or higher installed and both devices are operating on the same Samsung account. If you’re watching a movie on a Galaxy tablet, for instance, and then receive a call on your Galaxy phone, Auto Switch will pause the tablet video and lets you answer your phone via the Buds Pro. Once the call is over, your earbuds instantly switch back to your video through the Buds Pro.

If you’ve paired the Buds Pro with a new Samsung Galaxy S21 phone, you can access surround 360 Audio with Dolby Head Tracking so you can “feel” which direction the sound is coming from. (Dolby Head Tracking is due to roll out through a firmware update to older Samsung phones; Samsung isn’t clear when this will happen, though.)

Also, when the Buds Pro are paired with a Galaxy phone, you can enable dual-mic video recording – the phone records audio it hears, while the Buds Pro captures your voice.

More generally, there’s a Gaming mode (curiously behind the “Labs” tab in the Wearable app) that lowers audio-video lag time, and the Buds Pro can be quickly paired to a compatible Windows 10 PC via Microsoft’s Swift Pair – just open up the Buds Pro charging case and wait for the pop-up pairing prompt on your PC screen. BUT – other than the Samsung Auto Switch handoff function, the Buds Pro can only be paired to one device at a time, so Swift Pair may – or may not – work if you’ve already paired your Buds Pro to a phone. The Buds Pro didn’t Swiftly pair with my Acer Swift 5.

We auditioned a variety of tracks in a variety of music genres to adjudicate the Buds Pro sonics. Overall, I’d rate Buds Pro’s aural capabilities near the top compared to other buds at its $200 price range. You get plenty of volume, a clean and wide soundstage, wide dynamic range, and well-defined but not dominant bass, which can be emphasized if desired via bass boost in the Wearable app EQ. But no one will mistake the Buds Pro’s bass for Beats’ pounding bottom.

If pure sound quality is your primary true-wireless bud qualification, the Buds Pro have competition. For instance, the 1More True Wireless ANC are easily the best sounding buds around, airier with better-defined separation than the Buds Pro, along with equally effective noise-canceling, a sounds-live ambient sound mode, and five ear tips, all for the same price as the Bud Pros.

The Galaxy Buds Pro delivers eight hours of playback and 28 hours of total listening with the case charger. Turning on ANC (which includes the ambient mode) reduces battery life significantly, reducing playback to five hours and 18 hours of total time. You may decide that play longevity is more valuable than the slight ambient sound dampening improvement ANC provides. Five minutes of quick charging gains you an hour of playtime

Available for pre-order now on Samsung and BHPhotoVideo for $199.99.